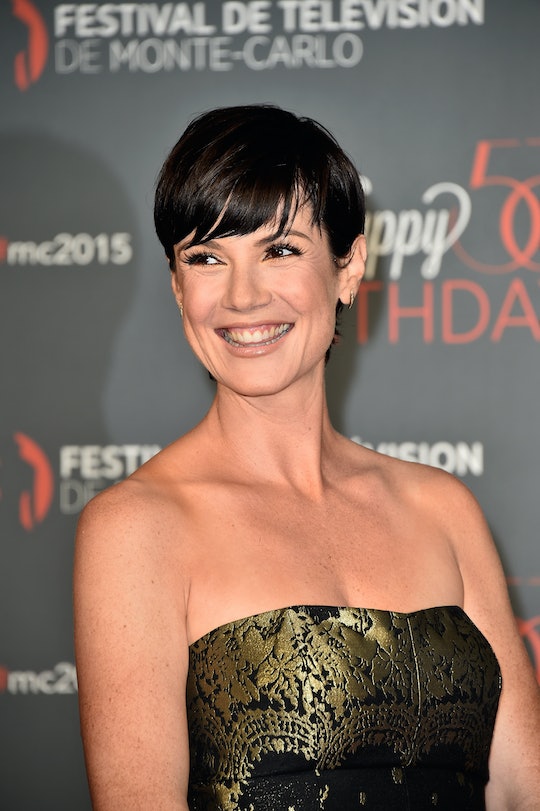 Zoe McLellan Talks About Dating As A Single Mom, & She's Candid About The Struggle

Although Zoe McLellan plays a badass Special Agent on TV, she's also a real-life mom to 2-year-old with a lot of the same challenges that many other moms face. The 41-year-old NCIS: New Orleans star refreshingly talked about the awkwardness of breastfeeding in public before, and on a recent edition of People's Mom Talk, Zoe McLellan talked about dating as a single mom, illustrating what so many single moms already know: Meeting men with a toddler in tow is freakin' hard.

During a conversation with three other celebrity moms about how fitting in "me time" as a parent is essential but also emotionally and logistically tough, McLellan said that, for her, being a parent is guilt-inducing. And she was really feeling it while shooting the segment, which went live Friday. She told Kelly Killoren Bensimon of Real Housewives of New York City, Bordertown's Jacqueline Piñol, and YouTube star and blogger Mindy McKnight that she was away from her son, Sebastian, for the first time ever.

"I woke up this morning hearing him say 'Mommy' and he's not even there," she said. "I hear his voice and I miss him so much and I feel like that guilt thing is no matter what."

And when Killoren Bensimon asked her whether she is dating after splitting up with her ex-husband, Jean Pierre Gillain, McLellan admitted she's still trying to figure that out.

"I feel like if I'm saying I want to date, I need to figure out how to do it," she told the other women.

It's a tough question, and Steven James Dixon wrote for Essence that it's important for parents to slowly introduce kids to anyone they're dating, and to integrate them naturally rather than springing them on kids "as their new potential father:"

From now on and forever more, your kid meets the potential husband way before he is the potential husband. Your child meets him when you deem that the dude is cool. The guy does not have to babysit your kid the first time you meet him. You don't even need to know the dude's fatherhood skills... yet. Once you decide that the man is cool, you can introduce the kid to him at the barbeque, at the church-house, or at the game.

That's certainly a good start, although there are other factors to consider, like childcare. During the segment, McKnight explained how when she and her husband had young children, they joined a "co-op" situation with three other families. Essentially, one set of parents babysat all the others' kids each Friday night on a rotating basis, so every couple had three Fridays a month for a "date night," and they watched all the little ones on the other Friday night.

McLellan doesn't have all the parenting answers, but she's certainly keepin' it real. On an early episode of Mom Talk, she said she felt "so awkward" when she tried to breastfeed in public. "I don't want to hang out for everyone to see because I'm shy about that kind of thing," she said. These issues — from dating to breastfeeding — may be awkward, but they're also vital to address, so props to McLellan for being so candid and relatable. When she figures out of the whole "dating with a kid" thing, she'll be quite a catch.

More Like This
Netflix Reveals The Official Teaser Trailer for Wednesday
From Poses To Backgrounds, These Are The Best Back-To-School Picture Ideas
What Parents Need To Know About Marvel's New She-Hulk Series Coming To Disney+
Kristin Bell Shared Some Sweet, Rare Photos Of Her Daughters From A Family Vacation