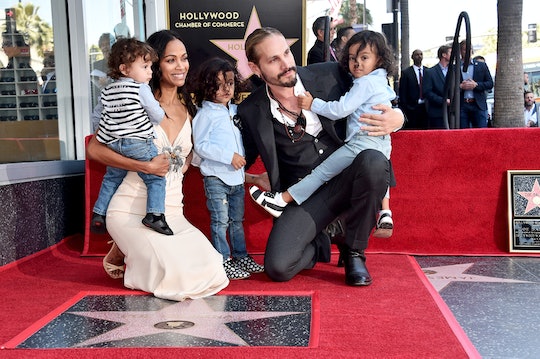 Parents decide how they want to raise their kids for so many different factors. When it comes to the decisions they make, their families, the world around them, and their own children can shape their view on parenting — and celebrities are no exception to this. Mom of three young boys, actress Zoë Saldana said she is raising her sons in a gender neutral household and parents need to hear her out because her reasoning behind it is awesome.

Saldana has starred in a lot of cult favorite movies among movie lovers, like the Britney Spears road trip film, Crossroads, or beloved super hero film, Guardians of the Galaxy. But lovers of those films might be a little less familiar with her role as a mom to her sons — 3-year-old twins, Cy and Bowie, and 2-year-old Zen — with husband, Marco Perego-Saldana, according to People. The mom of three rarely makes public appearances or talks about what it's like to be a mom to so many boys, so close in age, according to People.

But, in a new interview with Us Weekly, Saldana revealed something that might surprise some fans — that she is raising her sons in a "gender neutral" household. "We have a gender neutral environment where my husband participates in a lot of tasks that were normally given to a woman and vice versa," Saldana said, according to Us Weekly.

Confused? Don't be. Saldana explained to Us Weekly what she meant when she said that she does a lot of tasks, typically done by husbands, in her household. Saldana said, according to Us Weekly:

I get to do a lot of male things, which is, I don't know, put a TV together, fix things that break. We're sort of a very gender fluid household. I think it's important to raise boys in that environment and girls as well.

Perfectly stated. It might be cliché, but it's important for parents to tell their children that they can do anything that they set their mind to — whether it be fixing a TV, which can be seen as a "male thing," according to Saldana, or making dinner for their family — no matter the sex that their child is born with.

It's awesome that Saldana is doing this. Studies support that kids who are raised in gender neutral households have more opportunities, and have a stronger sense of their identity. While it might be awkward for some parents to explain to other moms on the playground, raising children in a gender neutral environment has a lot of positive benefits, according to Parents.

Saldana certainly isn't the first celebrity to make a statement like this. Singer, Pink, told The People that she is raising her two children, a daughter and a son, "in a label-less household," according to Newsweek, and trying to not make assumptions about her own children based on their sex. But by speaking about this, both celebrities can bring more awareness to this parenting decision that is growing in popularity, according to the Los Angeles Times.

This type of forward thinking isn't uncommon for Saldana and her family of four. When Saldana married her husband, who is an artist, in 2013, he took her last name, according to Us Weekly, but she was a little apprehensive as to what his colleagues might say. In a 2015 interview with InStyle, Saldana revealed that she had a positive (yet scared) reaction to the news. Saldana said, according to Us Weekly:

I tried to talk him out of it. I told him, "If you use my name, you're going to be emasculated by your community of artists, by your Latin community of men, by the world. Marco looks up at me and says "Ah, Zoe, I don't give a s—."

It's clear that Saldana has come a long way since then, and her husband and her are comfortable with who they are, together. Since a relationship is 50/50 from both couples, it really shouldn't come as a surprise that Saldana and Perego-Saldana are teaching their children that they are capable of doing every task they're capable of, or playing with any toy they'd like, regardless of their gender.

And by speaking up about this, Saldana is bringing attention to a way of parenting that some parents might be interested in but too afraid to try themselves. Her words matter — and it's super cool she is speaking up about it.