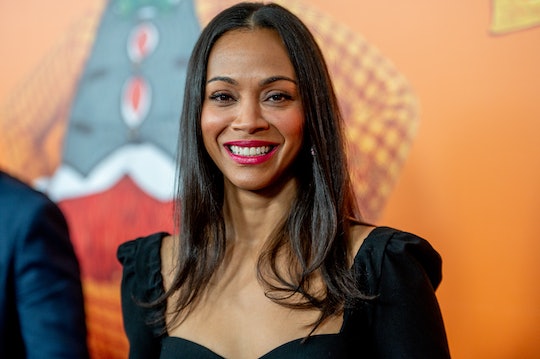 In an interview with Architectural Digest, Saldana opened up to the magazine about her home in Beverly Hills, California. Saldana said that her home is filled with expensive designer furniture, with an Italian, 1960's modern theme. Sure, it sounds super aesthetic, but Saldana is just as aware that having a home with three young kids running around in it means having to make it just as friendly for them.

Luckily, she isn't compromising her design style for them; instead, she designed her super chic home with her kids in mind. "I wanted to make sure that in addition to everything being beautiful and affordable and super artistic, I wanted it to be child safe," she told the magazine. "I have three boys and they're going to be jumping, ripping, and biting. I also wanted it to be durable."

She has a point, especially since her three sons — four year old twins, Cy and Bowie, and two year old Zen — are probably doing a lot of that right now (and will continue to do a lot of that until they leave the house).

Saldana continued, saying that while she has some super great items and spaces in her home, her favorite rooms are her the rooms that she and her husband created for their kids to live in and be loved in (so cute).

"I grew up in that generation where you only had one room in the house that was for the kids and then every other room you weren't supposed to go in, because that's where grandma's china was," she said. "I love that my parents raised us to be super meticulous, but I wanted our kids to live in homes and understand why they needed to be careful and not have area restrictions."

Instead of being limited to the living room, Saldana said that her kids are watching TV (just like every other young kid addicted to cartoons), but they're also playing on the floor, reading on the couch, and actually living in their spaces.

Just like she has a unique approach to designing her home, Saldana's approach to raising her sons is just as unique and brilliant. She told Us Weekly earlier this week that she likes to keep "a gender neutral environment" for her sons in her home by keeping "female toys and male toys" in the house. She told Us Weekly that her goal is to "not bring all this charge that you have as an adult and as a woman into their lives." "They're a blank slate," she added.

She has a point. And the best way to mold a blank slate is by letting them make decisions for themselves in every single space that they inhabit.