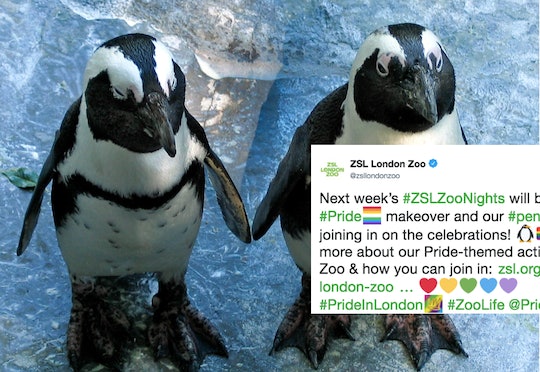 It never ceases to amaze me how homophobic logic delegitimizes same-sex couples by insisting they go against the "natural order" of things. Besides being bigots, these people neglect to take into account that same-sex pairings exist in nature all of the time. Penguins, pandas, goats, giraffes — same-sex couples are frequently found among these animals and more. And on the heels of Pride Month, it seems a zoo in London will continue the LGBTQ+ love in July. That's because the zoo's famous gay penguins, Ronnie and Reggie, celebrate pride with an amazing message.

If you haven't heard of them before, Ronnie and Reggie are a Humboldt penguin couple at the ZSL London Zoo. And as CNN reported, the zoo will be giving its July 5 Zoo Night event a "Pride makeover." According to a news release from the ZSL London Zoo, the event will include an opportunity to learn about gender and mating in the animal kingdom during a Pride-themed talk, where "they'll discover just how common same-sex pairings are." On Sunday, July 7, families can also attend a storytelling show by drag artist Mama G — during which she'll share stories about "being who you are, and loving who you want."

Awesome, right? But back to the penguins ...

According to Business Insider, zookeepers have created a banner for the Penguin Beach, where Ronnie and Reggie live. It reads, "Some penguins are gay. Get over it." Which, as the publication pointed out, is a nod to Stonewall's "Get Over It" campaign against LGBTQ bullying. The zoo unveiled the banner via its social media channels last week — and it's absolute perfection. "Penguin Beach is home to the Zoo's most famous same-sex couple, Ronnie and Reggie, and our penguins are joining in on the #Pride celebrations! 🐧 🏳️‍🌈" the official ZSL London Zoo Instagram account posted.

Instagram promptly fell in love with the quirky banner, and with the penguin couple all over again. One Instagram user wrote, "This is the best thing you have ever put out. Well done!"

Yet another Instagram user declared, "I LOVE THIS SO MUCH 💞."

Ronnie and Reggie first became an item back in 2014, according to the zoo's news release. They went on to adopt an egg that had been abandoned by another penguin couple — co-parenting their chick, Kyton, until he left the nest. It's worth noting that of the 93 penguins at this particular zoo, Ronnie and Reggie aren't the only same-sex penguin couple, either.

If you remember, a different same-sex penguin couple from a zoo in Australia made headlines in 2018 when they adopted an egg. Male sub-Antarctic Gentoo penguins Magic and Sphen were given a fostered egg at Sydney's Sea Life Aquarium — and immediately began taking turns incubating it, according to NBC News. Their chick hatched in October, 2018. "Both dads are doing well and are so in love with their precious bub," the official Sea Life Sydney Aquarium Twitter account tweeted.

In all seriousness, though, I wonder if the London zoo will come out with a "Some penguins are gay. Get over it" T-shirt? Asking for me.