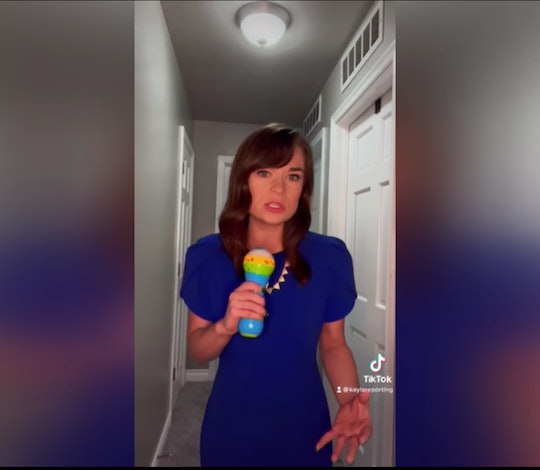 “What I can confirm is my son is a 2-year-old terrorist who held me hostage at the Olive Garden earlier today,” former TV reporter Kayla Sullivan said.

A former TV reporter is putting her journalistic skills to good use reporting on her toddler’s epic meltdown for TikTok. Holding a child’s toy as a microphone, Kayla Sullivan detailed a tantrum her 2-year-old son had while at a restaurant earlier in the day in a TikTok video that has since gone viral, garnering laughs and complete understanding from fellow parents.

“Kayla Sullivan reporting live from outside my son’s bedroom where he is currently being detained until naptime is over,” Sullivan said while standing in the hallway of her home. “Now this story does involve a minor so I can’t release specifics, but what I can confirm is my son is a 2-year-old terrorist who held me hostage at the Olive Garden earlier today.”

Before getting into the specifics of what happened, Sullivan reveals there were some eyewitnesses to her toddler son’s reign of terror, who likely walked away with a new perspective on motherhood. “It’s important to note the friends I met there do not have children and likely never will after witnessing this situation firsthand,” the former WLFI news anchor said.

“This is an active investigation, but authorities believed the proper precautions were taken,” Sullivan continued. “I brought my son’s favorite snacks and even risked judgment from other moms by bringing an iPad. But not even Cocomelon could have stopped this meltdown.”

So just what happened at the Olive Garden?

“After several cries demanding, quote, ‘chet-chup,’ a good Samaritan waitress miraculously understood it as the English word ketchup and brought him a bottle,” Sullivan recapped. “Unfortunately, her good deed was later punished after he threw a ketchup-covered fork at her. Not all heroes wear capes, but this one should have worn an apron.”

Like any good reporter, Sullivan attempted to dig deeper into the cause of her son’s tantrum, noting that “these toddler outbursts are becoming increasingly common as more and more parents try out the new craze ‘gentle parenting’ and completely suck at it.”

Sullivan’s video has garnered nearly 17 million views and more than 3 million likes since it was first posted earlier this week. In the comments, fellow parents like actor Alyssa Milano and singer-songwriter Andy Grammer applauded Sullivan for turning a stressful parenting moment into comedy gold.

In a virtual interview with Inside Edition, Sullivan later clarified that her son “is not really a 2-year-old terrorist,” but rather “a big sweetheart.”

“But he is a toddler so sometimes he does throw tantrums in public,” Sullivan said as the toddler in question wiggled on her lap and messed with her hair.

“There you have it,” Sullivan concluded. “He’s sorry.”