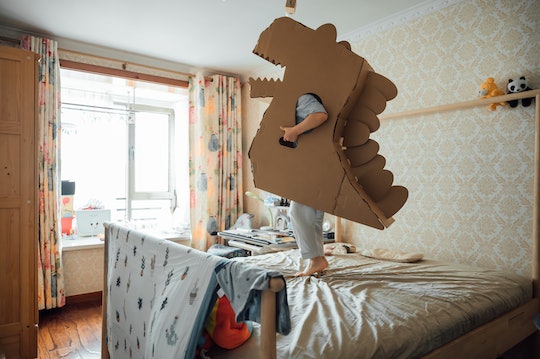 My son's way of coping with the pandemic: creating a made-up country, where things are a little more fair.

In a stretch of sea between Japan and Australia is a small island known as Hoilemondei. It is a fair nation, in more ways than one: It is beautiful, with lush jungles, verdant pine forests, sweeping tundras, and untouched beaches; and also it is just, a place where both humans and animals are treated equally and with respect. Most people have never heard of Hoilemondei, but I am deeply familiar with its history, customs, and language. And I know its ruler well — he is my 8-year-old son, Marlow, who founded the country nearly a year ago, just days after COVID-19 shut down schools.

Depending on his mood, the leader of Hoilemondei is a noble emperor, a power-hogging president, a limit-pushing prime minister, a cranky dictator, or a bored king. His style of governance follows his mood, and his “people” — myself; my husband, Addie; and our 4-year-old daughter, Sydney — are sometimes subject to the vicissitudes of his fortune or frustration. And there has been a lot of frustration.

Remote learning has been a bust for us: Sitting down at the computer for hours of Zoom classes just isn’t working for the king of Hoilemondei, who has trouble being still for longer than a few minutes at a time. He’d rather be baking ginger scones from random ingredients rummaged from the pantry, constructing a grappling hook out of twigs, reading the periodic table, or trying to enforce a morning schedule for his little sister even as he ignores his own. Sample: “Wake up, eat waffel, get dressed, brush teeth, bow to hoilemondei, leave for school.”

There is no denying that COVID-19 has underscored the unfairness of so many things. So we have stopped denying it.

Marlow’s obsession with what’s fair versus what’s unfair has been a one constant in our chaotic lives since the pandemic struck. And while we don’t treat all of Marlow’s concerns with the gravity that he does (it’s not fair when parents say, “Just deal with it!”), there is no denying that COVID-19 has underscored the unfairness of so many things.

So we have stopped denying it.

My son is dealing with it by creating a country where things are a little more fair. In Hoilemondei, kids go to school 4 ½ days a week, and they study mostly geography and science. Depending on the day of the week, they also participate in different Hoilemondein customs and traditions, such as drinking tea, praying to Buddha or the Shinto spirits, fighting with foam swords, and playing Minecraft. In Hoilemondei, you don’t have to say Black Lives Matter because of course they do. You can choose whether you want to be a boy or a girl or neither because in Hoilemondei, there are no hard rules about gender — you’re just a person. A person who, under the law, is created equal with animals, which are sacred. A common ritual is to take black cats and paint their foreheads with a moon crescent, says the leader of Hoilemondei, and “if they don’t like that, then we give them a bottle of catnip.” A human may choose to marry a cheetah, if the cheetah so desires, according to the Hoilemondein Constitution.

The constitution is a work in progress, but among other provisions, it establishes the following: No person may cut more than 11 trees in their life; no hurting animals for carpets or sofas; no littering; no dog-killing shelters; no bad presidents; no moms and dads making every single rule; no watching Peppa Pig; no pullooting [sic]; no eating bananas near someone who doesn’t like the smell of bananas; and no putting animals in cages. The last time this law against caging animals was violated, the offense led to Hoilemondei’s famous war, the Day of Icelandic Aggression.

The national currency, the suro (which I'm told means dragon), bears the Hoilemondein motto, which roughly translates to “In nature we trust." The country’s nickname is, “the land of nature protection,” and its national flag features a symbol of the Great God of Suro. The people of Hoilemondei don’t actually believe the dragon is real, but they do believe that Earth itself is alive.

Fortunately, there was still a place for me, within reach, where things could be made right: Hoilemondei.

On Jan. 7, I eavesdropped as my son attended his third-grade morning meeting via Zoom. “Have any of you heard about what happened yesterday — Pro-Trump supporters storm Capitol?” he asked the little faces in little boxes on the screen. One boy said someone had been shot before the teacher gently redirected the conversation, and the boy switched to talking about his loose tooth.

Normally on a Thursday morning, I would have been in the newsroom of our local paper, where I was editor-in-chief. But a little more than a week before the riot, I lost my job. My position was eliminated, and I was laid off. Fortunately, there was still a place for me, within reach, where things could be made right: Hoilemondei.

When I got home from the office that day, my Subaru filled with boxes I couldn’t bring myself to unpack, I was greeted by a message, written in Crayola marker and taped to my front door: “Do you accept the job of absolute chief of the Hoilemondei Times?”

I stood there for a few minutes, and then I walked into my house and hugged my son, who hugged me back.

In Hoilemondei, there is a guiding principle that has yet to make it into the constitution but that everyone still must follow. It is the notion that nothing but your own body belongs to you — everything else belongs to the Earth.

It’s amazing how many things “don’t belong” to Marlow’s little sister, but occasionally he’ll make an exception for himself when talking about my throne (a dining room chair he has repurposed for ruling), my staff (a pole topped with a cardboard cutout of the national dragon symbol), or my signs (ever-proliferating drawings of the same symbol that he hangs around the house and that magically disappear when he goes to his babysitter’s house).

Still, my husband and I have learned to pick our battles, especially during a global pandemic. So we have adapted, and we find ourselves — if sporadically and somewhat ridiculously — saying things like, “Maybe you can finish the Hoilemondein beef that you started” or “go put on the sweater that you’re borrowing from the Earth.” Usually, that does the trick.

A few days after losing my job, it occurred to me: The newspaper never “belonged” to me either. Technically, it belongs to the company that owns it. But in a more spiritual sense — a more Hoilemondein sense, you could say — it belongs to the readers, to all the people who share their stories and voices across its pages and have been doing so for around 235 years.

Fair or not, I am at home a lot more now and able to supervise Marlow’s learning. It feels like a huge win if he sits through a math problem, and yet I know that the real-life lessons of this past year are profound. Our transition back to in-person school has been a difficult one, marked by Pop-Tarts and tears. The Pop-Tarts are Marlow’s reward for completing his morning routine and getting into the car. The tears (sometimes mine) come when we don’t make it that far. Boxes on the checklist are left unchecked some mornings, but we try and try again. Because we have to. Even as I push him, I know that what my son is experiencing is only natural — and normal.

In a sense, we’ve all been living in our own Hoilemondeis, on our own little islands. Some of us have been lucky enough to make utopias; others among us have been stuck in our own private hells. At my house, we have experienced both, depending on the day or even the time of day.

More vaccine is on the way. Like the rest of humankind, the citizens of Hoilemondei will re-enter society soon. And tomorrow, whether he wants to or not, the king is going to school.