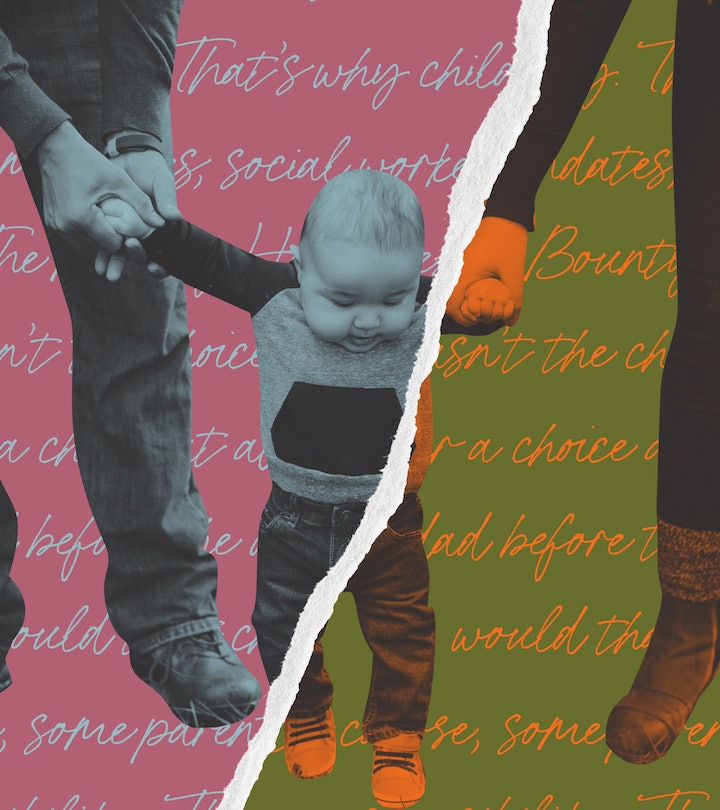 You just have to start taking the blame.

My son was only 6 months old when my ex-wife and I decided to get a divorce. It was less of a conscious uncoupling and more a response to the clear and present danger of us arguing in front of him for the rest of our lives. As difficult as it was to admit we’d hit the end of the road with our marriage, it was even harder to imagine raising our son in a home where there wasn’t love.

Of course, this sad state of affairs makes for a complicated child-rearing experience. In a childless divorce, you can walk away, put the other person in the rear-view mirror of bad memories, and hopefully start fresh in a new phase of your life. But the act of creating another human being together means you will remain inexorably tied to your former spouse forever... or at least until one of you croaks. “Till death do us part” sounds romantic until you have a kid, and then you realize that part of the deal is non-negotiable. You will see your ex at every kid handoff, but also parent-teacher conferences, graduations, birthdays, and maybe a wedding.

“Till death do us part” sounds romantic until you have a kid, and then you realize that part of the deal is non-negotiable.

Of course, some parents shirk their responsibility. That’s why child support mandates, social workers, and Dog the Bounty Hunter exist. That wasn’t the choice I made. It wasn’t ever a choice at all. I wanted to be a dad before the divorce. Why would that change after?

So, what to do when you are forced to spend countless hours with the living reminder of your greatest failure in order to see your child? How do you let go of your disappointment, or worse, your simmering anger, in order to be effective parents? I’m so glad you asked.

Now, I can’t guarantee these will work for you, because I don’t know you (unless, of course, you are my ex-wife and you are reading this to make sure I don’t say anything embarrassing), but I can guarantee that these worked for me, because I haven’t sobbed in my own car in months!

The first, most difficult step I had to take was accepting that our divorce was my fault. Not because I was wrong about everything, but because my behavior played a part in the relationship’s end result. Taking responsibility for your life is one of those things you’re told you’re supposed to do as an adult that a lot of us rarely ever put into practice. It’s just a whole lot easier to blame someone else, usually someone who can’t defend themselves.

I’d like to find a scapegoat for every problem I’ve ever had, but that just leads to resenting perfectly good people, like your former spouse who you’re trying to raise a child with. By accepting a reasonable amount of blame for my divorce, I could stop hating my ex and I could take control of my own healing process.

Because the truth is, I started plenty of those fights. I ignored my wife’s text messages so I could spend more time with my friends. I withdrew physically and emotionally. I wasn’t a victim. I wasn’t being manipulated. I made a series of bad choices. And after accepting that, I apologized.

I apologized to my ex-wife. I apologized to all the girlfriends I dumped for no reason or cheated on. I apologized to my mother. I even apologized to my dry cleaner for blaming her for my pants not fitting anymore. I haven’t been getting much exercise. That’s on me, not the dry cleaner. I didn’t have a breakthrough in therapy or read a particularly moving self-help book. I can’t put my finger on why I did this, but maybe I just had one glass of wine too many and started regretting some life choices.

I had a choice to either cut off my own hand and run away or stay tied to the infernal machine and get chopped up in a million tiny pieces. Metaphorically, of course.

You will be tested, though. You’ll be tested countless times. Were you late for an appointment? Are you not making child support payments on time because money’s tight? Did you agree to watch the kid on a Friday night and forget? Or worse yet, are you having a fundamental disagreement about how to raise your child? In all of these potential situations, your old wounds will open back up. You’re going to be falling into familiar roles and repeating a myriad of mistakes from your previous life as a couple.

My ex and I did this early and often in the course of our breakup. We’d snipe at each other, shut down, and become passive-aggressive at even the slightest challenge to our hard-won detente. If I was late to picking our son up, I was inconsiderate. If I put the forks in the wrong part of her dishwasher, I was thoughtless. It felt suffocating, like I was tied to one of those torture contraptions from the Saw movies. I had a choice to either cut off my own hand and run away or stay tied to the infernal machine and get chopped up in a million tiny pieces. Metaphorically, of course.

Just like sticking around to be an active and involved father, it was never really a choice to make. The only thing to do is wake up one day and realize you aren’t trapped at all. You can make the torture device disappear when you realize none of this is actually torture at all. In every situation, I had chosen to escalate the tension, to be as difficult as possible, and to project so much wounded energy that nothing positive could happen. Then I realized I could also choose not to do any of that.

I can apologize for myself, but I also have to forgive my ex at the same time.

Letting go is not easy. Sometimes, clinging to your anger can become the centerpiece of your entire worldview coming out of a divorce. I know plenty of people who are motivated primarily by spite. Most of them are Hollywood talent agents. Do they seem happy to you? Most of the time, yes, because they’re really rich. But some of them aren’t! Some of them are actually quite miserable.

Anger distracts you from the most important person in your life: your child. They need you more than you can ever truly fathom.

Anger distracts you from the most important person in your life: your child. They need you more than you can ever truly fathom. That need will last them their entire life, even if they have a hard time articulating it when they’re older. The more present you are now, the more you can be the person they need later on. My ex-wife and I are able to make decisions together and have difficult conversations without it turning nasty. We can agree to always make decisions in our son’s best interest without our own egos getting in the way. She also lets me give her dating advice, which she probably shouldn’t.

And when you stop putting all your energy into being mad, you might remember that the ex you hate was actually your friend once, and you might be able to be that friend again. At least on every Tuesday, Thursday, Saturday, and most national holidays.