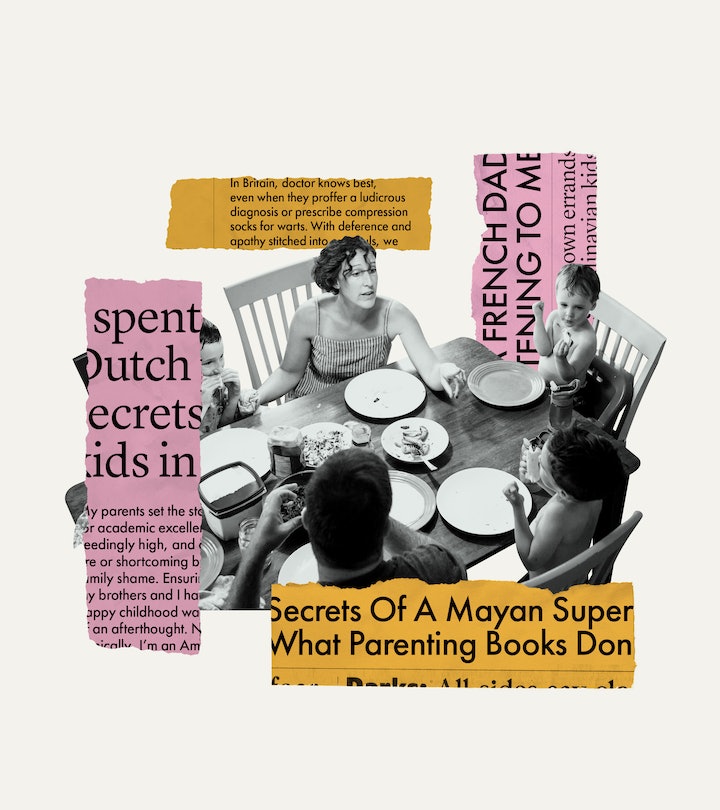 Parenting Like The Mayans Isn’t Going To Fix This

The inequities American mothers and fathers face would leave even the chillest hygge parent on edge.

In April 2020, roughly two months after New York City shut down due to the coronavirus outbreak, my husband sent me an op-ed in the New York Times about what American parents (read: mothers) could learn from other cultures to manage the emergent chaos of trying to work while minding their cooped-up kids. Drawing from her research in far-flung populations, from the Inuit to the Mayans to Tanzanians, the writer extrapolated how to “turn your demanding child into a productive coworker.” The trick of it? Teach your kid to work, and then ignore them.

My husband sent me the piece to be helpful, I think. It was the early days of COVID, and I was home full-time with my two toddler sons trying to conduct phone interviews while my children constantly interrupted. A breakdown seemed imminent. And yet the op-ed, nudging me to train my kids to be productive, autonomous mini-mes, felt less like a liberation manual than the latest manifestation of that favorite internet genre: You’re Doing It Wrong. Not only that, but someone else, in an entirely different context, is doing it better.

Our obsession with other cultures’ approach to parenting seems to rest on the weird idea that childhood should be this prelapsarian experience, in which kids run through daisy fields or fish for trout in creeks or die of diphtheria or whatever it is we all did before the internet.

This is now a regular trope in American parenting culture: they’re doing it better over there. There are lots of different “over theres”; the op-ed writer sought parenting wisdom in ancient cultures, but American parents have also pounced on childrearing methods in contemporary societies, from Europe to Asia. Surveying what is now a whole sub-category of parenting advice, you’d think that foreign children are practically invincible: French kids don’t eat between meals; Japanese kids run their own errands starting at age 3; Scandinavian kids walk naked through the snow. And on it goes.

Over there, they do not buy STEM toys for toddlers or monitor infant heart rates with smart socks or speak to their children in phrases approved by child therapists. Over there, adults miraculously retain their own identities and free time whilst simultaneously fostering independence and healthy self-esteem in their offspring. But are American parents to blame for their own anxiety around childrearing, which research suggests is the highest in the developed world? Or are we each expected to compensate for the structural inequities built into American parenting, inequities that I’d bet my last organic teething ring would leave the chillest hygge parent on edge?

Our obsession with our own overparenting and other cultures’ supposedly more laissez-faire approach seems to rest on the weird idea that childhood throughout history (“before” is yet another “over there”) was — and still is, outside our national borders — this prelapsarian experience, in which kids were free to run through daisy fields or fish for trout in creeks or die of diphtheria or whatever it is we all did before the internet, without adults lording over them with math worksheets all day.

While it is true that I was left to my own devices a lot as a child, and generally think of that time as formative and enjoyable, approximately none of it was spent working quietly alongside my parents. Instead, 90% was dominated by two activities: roaming around outside unsupervised, or watching television. Letting my children do the former would probably get me arrested these days where I live, and the latter, well, we all know the perils of that.

Nobody is actually interested in going back to the ‘80s, when car seats were essentially optional, and a major part of our kindergarten curriculum was learning what to do if we caught on fire while alone.

The invective against the evils of over-attentive parenting also ignores the reality of how this generation of American parents thinks about child-rearing. While many of us realize that our current level of childhood management is extreme, nobody is actually interested in going back to the ‘80s, when car seats were essentially optional, and a major part of our kindergarten curriculum was learning what to do if we caught on fire while alone. Also, if you don’t send enough snacks to a contemporary day care, they scold you, as does anyone who sees you take a child out without a hat.

Most of us are doing our best to thrash out our own middle path. The other day I was served an ad for a workshop about “mindful potty-training.” I had an agonizing time potty-training my older son, and I probably should rethink my approach now that his brother is getting ready to ditch diapers. But given that the last thing I personally want to do once I get my kids into bed is think more about parenting, I watched a six-part docuseries about cults instead.

We can’t just import other cultures’ parenting styles any more than we can turn back the clock, which is why all those paeans to foreign parenting do little more than reveal our cultural tendency to turn to self-help — the more exotic-seeming, the better — instead of demanding policy changes designed to benefit American families.

If parents living in virtually every Over There seem less stressed about giving their kids a leg up than parents in America do, that’s because those nations have robust social services, ample parental leave, and minimal college tuition. In a place that has none of these things, it makes sense that parents would focus more on optimizing their children’s futures: better school performance or a wider variety of extracurriculars could mean the difference between free college and a lifetime of crippling debt, to pick just one logical reason for parental over-involvement. In other words, don’t hate the player, hate the game.

If you don’t want to be an intensive parent, you can start by refusing to cosplay as an Inuk.

Once, an academic I was interviewing about the anti-vaccine movement for a piece said something sympathetic about the parents — by and large mothers — who developed vaccine hesitancy. These women, the researcher said, were in many ways the victims of a society that put the burden squarely on them to make educated choices about their children’s well-being, while offering little by way of financial assistance, community support, or education.

The conversation profoundly shifted the way I thought about that demographic, and more broadly about the pressure parents face to sift through the mountains of cultural input they receive about their parenting choices, much of which is influenced by history, capitalism, and a very rational — if occasionally outsized — anxiety about how to raise a kid to thrive in America, a place where practical and emotional help is in short supply.

If you don’t want to be an intensive parent, you can start by refusing to cosplay as an Inuk. And if you want to be the parent who packs your kid’s calendar with activities and always has the perfect non-toxic snack pouches stuffed to the brim with nut-free trail mix on hand, I won’t judge you (although I may ask to sample the trail mix). Unfortunately for us, there isn’t a stern but loving British nanny waiting to swoop in and fix our very American parenting errors (unless you signed a deal with Netflix), but maybe they aren’t really errors. Maybe the British (or Dutch, or Swedish) nanny isn’t really our savior after all. A bajillion months into the pandemic, I’m fairly certain that meaningful change for American parents lies not in fetishizing another culture, but in our government offering parents meaningful support. Until that happens, I’ll be on my couch, catching up on the cults.

More Like This
How Do I Rediscover My Sexuality When I’m Completely Touched Out?
How To Ask Your Partner For Support When You Need It
I Found Gender Euphoria In My Second Pregnancy
OB-GYNs On How The End Of Roe Changes How They Can Care For Us