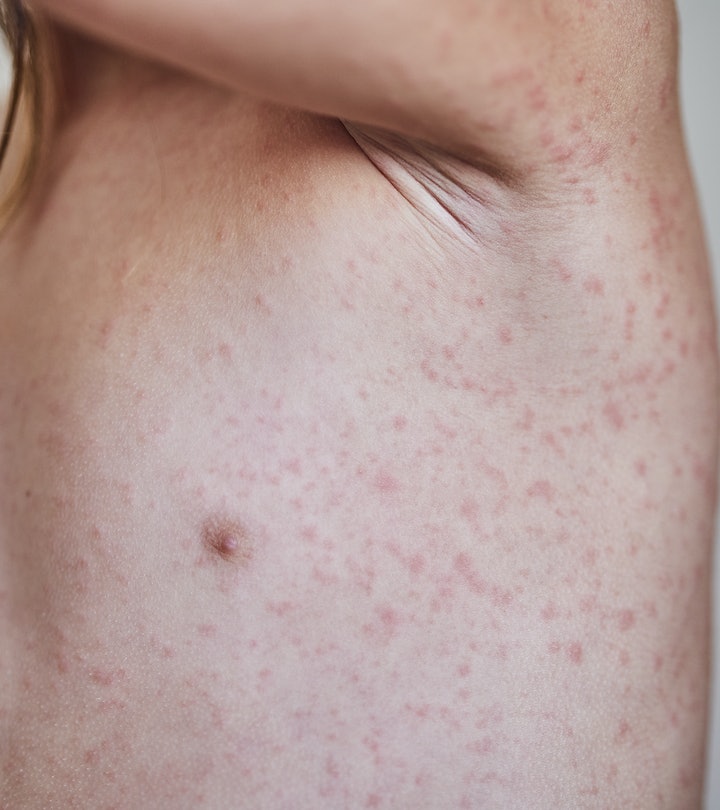 Amoxicillin Rash: Is It Really An Allergy? Doctors Explain

Doctors explain how to figure out what’s going on.

You may have heard that children who take amoxicillin can develop a rash. But does an amoxicillin rash mean an allergy? First of all, the term “amoxicillin rash” itself is fraught, despite its widespread use in the parenting community. Often when receiving a prescription for amoxicillin, parents are given a warning that the amoxicillin can sometimes cause side effects, including a rash that may appear after their child has been on the antibiotic for a few days. However, most pediatricians are also wary of the concept of ‘amoxicillin rashes’ themselves, as it can sometimes cause parents to believe their child has an allergy to the medication that means they shouldn’t take it. “‘Amoxicillin rash’ is a dangerous generalization in my opinion,” says Dr. Mark Toney, Division Chief of Hospital Pediatrics at Nemours Children’s Health at Wolfson Children’s Hospital. “More than 80% of these rashes are benign and minimally symptomatic,” Toney says, adding that the appearance of any rash on your child indicates the need for a prompt evaluation.

What is an amoxicillin rash?

Amoxicillin is a commonly used antibiotic, often the first course of treatment for common childhood illnesses, like ear infections. Sometimes, children experience a rash a few days after starting the medication, explains board-certified pediatrician Dr. Natasha Burgert. “In most of these kids, the rash is a symptom of a viral infection occurring while the medication is being taken, rather than a true amoxicillin allergy or intolerance,” she adds.

Determining if a rash is caused by a medication or virus often requires a trip to the doctor, or at the very least a few photos sent off to the advice nurse for evaluation. “Parents should talk to their pediatrician if they see a rash after starting amoxicillin so they can discuss the next steps and if seeing an allergist is indicated,” says Dr. Maureen Bauer, a specialist in Pediatric Allergy & Immunology at Children's Hospital Colorado.

Should my child stop taking amoxicillin if they develop a rash?

Until you can connect with your child’s pediatrician about what may be causing the rash, our experts agree that you should at least pause the course of medication after noticing a rash. “If your child develops a rash after taking any type of medication, call your child's doctor as soon as possible. Until you connect with them for advice, do not offer any additional doses,” Burgert explains. However, if your child’s rash is determined to be not a true allergy, Toney says it is likely that “based on the evaluation, the provider may elect to continue treatment.” There is no one-size-fits-all answer to whether or not it is appropriate for your child to continue taking amoxicillin if they develop a rash while taking it, so it is very important to check in with your doctor as soon as you notice a rash.

How long does an amoxicillin rash last?

A so-called amoxicillian rash commonly looks “like small, raised red bumps on a child's stomach and back and is not very bothersome,” says Burgert, adding that parents can expect it to begin to fade within five days, and be completely gone by the two-week mark.

However, because the rash you are noticing could be caused either by what Toney calls a “hypersensitivity reaction” to the drug, with minimal symptoms or by the virus your child is fighting, it can be tricky to pin down exactly how long you might expect the rash to last. The longevity of the rash “depends on the etiology of the rash,” clarifies Bauer. “Hives due to true allergies to amoxicillin will resolve typically in a few hours after stopping the medication. Rashes from viral infections that occur when one is also taking amoxicillin can take several days to weeks to resolve.”

Rashes from amoxicillin: Is it a true allergy?

Symptoms that make it suggestive of a true allergy, according to Bauer, are as follows:

“In general, rashes that are flat and not bothersome, start several days into the course of the amoxicillin and last for several days after completing it are less likely to indicate a true allergy.”

What are other common side effects of amoxicillin?

Common side effects of amoxicillin are mild for most people, and can include:

“Rarely, amoxicillin may trigger a life-threatening allergic response,” Burgert adds. “A serious allergic reaction includes a variety of symptoms, such as severe hives, vomiting, swelling or difficulty breathing. These reactions happen within hours of taking the medication and need to be treated emergently.” If you believe your child is having an allergic reaction to any medication, contact your child's pediatrician or call 911.

When to call the doctor

You should contact your child’s doctor as soon as you notice the rash, and watch for any accompanying new symptoms. Their pediatrician will make sure there are no other symptoms such as persistent fevers, joint pain, swelling or other symptoms of concern. However, once you’ve clarified that there is not a worrisome allergy at play, you can manage your child’s rash at home with love and care as you wait for it to go away. “An amoxicillin rash will go away over time, even without treatment, Burgert says. “If the rash is itchy or bothersome, controlling symptoms with oral long-acting antihistamines or topical hydrocortisone may be helpful.”

More Like This
A Parent’s Guide To Stomach Pain In Kids
Do Parents Really Need To Worry About Their Gas Stoves? Pediatricians Explain
Viral Hives In Children: What Doctors Want You To Know
101 Would You Rather Questions For Kids
What Parents Are Talking About — Delivered Straight To Your Inbox