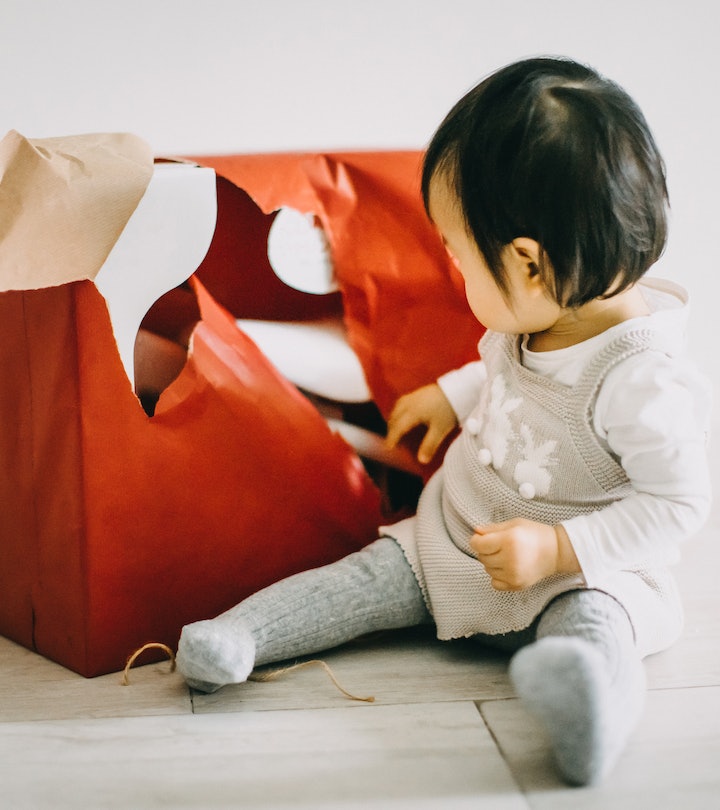 Your Baby's Obsession With Wrapping Paper Is Pure Science

Seriously, all that ripping and crinkling is good for their development.

One of the best parts of being a parent over the holidays is watching your child open up their gifts. The delight on their faces as they tear through the paper is almost too much. Oddly, though, for little kids, the paper is kind of the best part. What is it about wrapping paper that so enchants babies and toddlers?

The near maniacal state little ones go into as they demolish the pretty printed paper is so genuine that it makes you question why you don't still get that same joy. I mean, I reuse gift bags over and over every year, and take off the wrapping paper from my gifts so gently it's pretty much perfect. The level of joy is simply not the same. No, toddlers plow through their presents with reckless abandon, ripping and tearing, balling up and crunching, and creating complete holiday mayhem in its wake. And throw a baby just learning to sit up a ball of wrapping paper, and there's the real gift, my friends.

But it turns out that the act of opening the presents and zipping through their paper confines is a very real part of a child's development, according to early childhood education experts at The Conversation. "Through the sensory and physical exploration of the discarded boxes and Christmas wrapping paper, the foundations of learning and cognitive development are occurring," the website noted.

Researchers for the journal Child Care posit that this sort of sensory play is a way that your child engages with learning in the early months of their life. Everything is new to them, and crinkly paper is particularly novel to them. This solitary, sensory play lights up the centers of their brain that respond to sound, texture, and even cause and effect. It begins the process of developing the neural pathways that lead to greater, more complex learning like problem solving. The newness of it is a fascination. It falls along the same sensory experiences of bubble wrap, crinkle toys, and even rattles. Babies now don't have the newspapers that we did as children to rip through on a daily basis, so seeing something so grand and colorful that also crinkles, rips, and has multiple textures is pretty fun for them.

Psychologist Dr. Shane G. Owens tells Romper that as those babies get older, "To toddlers, wrapping paper is magic. It can become anything and be integrated into play they already have going on. Wrapping paper engages the same senses — sight, sound, and touch — targeted by the toys marketed to toddlers' parents." It just happens without the heavy price tag, on a very analog level. He notes that while toys are great, and a ton of fun, they're somewhat limited by their design, but wrapping paper? It can be multitudes, and active toddler brains love taking on that task. "Wrapping paper can turn into a bird and a robot and a truck and anything else the kid imagines," Owen says.

However, Owens also notes that we as parents might be influencing their obsession, just a little bit. "Adults' reactions to kids playing with wrapping paper instead of the gifts it contains likely play a big part in the fascination. Think about how surprised and happy adults get when they see kids going for the wrapping instead of the toys. Those reactions sound thrilled to little ears and reward the behavior, even if adults are left wondering why they spent money on toys."

Yes, they genuinely love it, and they're having a good time, but maybe, just maybe, they're playing to their audience as well — which might be the cutest thing ever.

More Like This
5 Superstitions About Babies Born On Valentine’s Day
How To Celebrate Baby’s First Valentine’s Day, From Gifts To ’Fits
35 Sentimental & Joyous Quotes for Sunshine Baby Day
Celebrate Your Baby’s 1st Valentine’s Day With These Instagram Captions
What Parents Are Talking About — Delivered Straight To Your Inbox