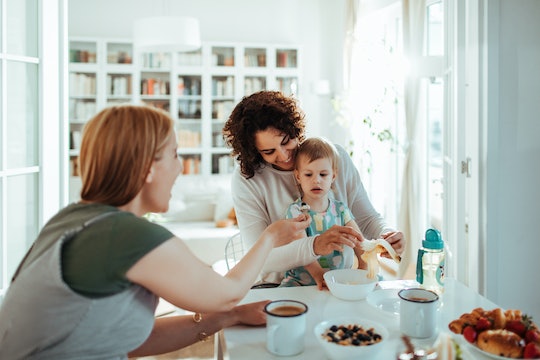 How Do Two Queer Moms Build An Ethical Boy? It’s Trickier Than We Thought

The zoo animals in the gender-neutral nursery may have had tiny bow ties, but we decided the giraffe was a handsome butch woman.

In 2018, after two rounds of IUI, my wife conceived, and we both assumed she was brewing a girl. “I can feel it, I know it,” my wife said when discussing the sex of the baby. And I believed her; her sense of her body had never been wrong. I know gender is a construct and it doesn’t matter what you refer to a fetus as, but the point is, I had a way in which I thought things would go. For weeks, we referred to the baby bump as she and her.

We waltzed into our 22-week ultrasound appointment and were dumbfounded when the technician waved a wand across my wife’s stomach announcing, “Congratulations, it’s a boy.” I quickly recovered, knowing I’d be happy to have whomever we received, but a disappointed beat did bounce through me.

At the time, aside from a handful of men related to me by blood or marriage, my life was barren of men. As a young adult, I’d tried using men as a form of unsuccessful sexual corrective therapy, and a way to seem normal to my sorority sisters, but by the time I was 30, I had married a woman and my closest confidants were all females.

As a writer, I wrote for women, specifically queer women, and once I accepted that notion, I never wondered or worried about how my work or life affected men. Eventually, the whole cis male gender was an afterthought. “If they want to do the work, they can figure it out,” I’d always said. Building a good man wasn’t my job.

After the ultrasound, I realized I had to start understanding men, boys, and their perception of the world. Suddenly, it felt like my responsibility to figure out how to build a more ethical male.

Until it was. After the ultrasound, I realized I had to start understanding men, boys, and their perception of the world. Suddenly, it felt like my responsibility to figure out how to build a more ethical male. Of course, I recognized that perhaps my son would actually be my daughter or a queer person, but I felt more suited for those truths. than the idea of raising a cis straight man and statistically, I realized that could be his truth. My first step was to tackle his nursery.

“No construction work theme, or dinosaurs, and please not too much blue,” I said to my wife as we scrolled through artwork on Etsy. We settled on zoo animals, some of which were wearing tiny blue bow ties, but my wife placated me by declaring the giraffe to be a handsome butch woman. When it came to baby clothing, we avoided anything deemed too masculine — monster trucks, footballs, race cars — and we forbid any heteronormative sexualized apparel (“Ladies Man”; “Watch Out, Girls”). It would be all rainbow stripes, bear faces, and polka dots for our little one.

When our son arrived, I was astounded at my immediate attachment, swift and consuming. There is nothing gendered about babies, so for months I forgot all the ethical boy-building and was overwhelmed with his smooshiness, warmth, and the way his meatball hands and sausage fingers grasped my palm.

Gender wasn’t top of mind most of his first year. He was simply our baby. The first months were a blur of diapers, bottles, cuddles, and sleep deprivation — there was little time to think about building a better man.

As more months passed and our lives leveled back out, his gender identity eventually sprung back into my consciousness. Statistically, I realized he’d likely be a straight male, at least until he notified us otherwise. And if he were a straight male, I realized, I’d already made obvious errors. While I wasn’t allowing him to wear firetruck onesies, I had been referring to him as “the Prince of Park Slope” for the past 11 months. Furthermore, I was constantly telling him how beautiful, funny, and smart he was. Had I already initiated the first step in creating an entitled ego maniac? It dawned on me that keeping him away from certain T-shirts was not likely the answer to raising a better boy.

“We have to stop calling him The Prince of Park Slope,” I said to my wife over dinner.

“I heard they call him The President of MyGym,” she said, which was a local play center he attended five times a week.

“Well, he is a genius and the cutest, of course they call him that!” I said, not being able to help myself but now feeling sure I was creating an arrogant monster.

At 18 months, it became harder to enforce our gendered clothing rules as he began demonstrating his own preferences, which leaned heavily on vehicles. He loved construction trucks, city buses, garbage trucks, and anything flying in the sky; his poor index finger must have felt exhausted from all the pointing while we were outside.

His grandma, taking note of his budding interest, bought him a shirt covered in construction trucks. He loved to look down at it and point and squeak in excitement. For good measure, I gave him a baby doll, which he occasionally hugged and pretended to feed, but most days he preferred jamming rocks into his trucks and collecting sticks on walks. I let him enjoy it all, of course, knowing I’d be a hypocrite if I stood in the way of his natural curiosity.

After begrudgingly accepting his interests, while of course still forcing him to listen to showtunes and detailing the newest story line of Housewives, I realized I didn’t know then how to help him be a good man, or not beyond simply avoiding gender stereotypes.

And then, at 20 months, he started to try to talk. The day was full of noises denoting a variety of feelings and thoughts. He screeched to let us know he didn’t like the song playing on the TV or if couldn’t reach a toy. He howled, signaling that we were reading him the wrong book.

Listening to him try so hard to communicate had me thinking more about the ways in which social expectations can damage boys’, then men’s, ability to communicate. I thought of all the men I disdained — the misogynistic frat guy archetypes, the love you “no homo” bros, the gaslighters, the abusers, and “family values” politicians — and what they had in common.

I may have been getting ahead of myself, but my toddler was there to bring me back to the present, screaming at the TV and looking at me to change the channel.

“Help me,” I said, looking at him. “You say it: ‘Help me.’” He paused, then parroted, “Hep mah” in a calmer, more relaxed voice. It wasn’t perfect, but it was a good start. “Yay!” We both clapped at his attempt, and I changed the channel for him.

Another afternoon, he stood swatting at the kitchen table, trying to reach for his milk and grunting loudly. “Please,” I said to him and waited. “Les” he said back before I handed him the cup.

“Thank you,” I said, handing him half of a breakfast banana over our kitchen table. “Tank gu,” he said, smiling back, knowing our new routine.

“If nothing else, he won’t be rude,” I said to my wife, who was at that moment prompting him to say, “Thank you,” as she shared a spoonful of ice cream with him.

These short phrases and polite gestures won’t fix everything, but it feels like the beginning of something. I know I can’t mold him into the perfect feminist ally, or the perfect anything, but I have the suspicion that it isn’t the dinosaur shirts or Tonka trucks that make the man.

I am starting to feel hopeful, too, that by letting him feel all his feelings and helping him learn how to ask for what he needs, he will turn out to be a decent human being, regardless of his gender.