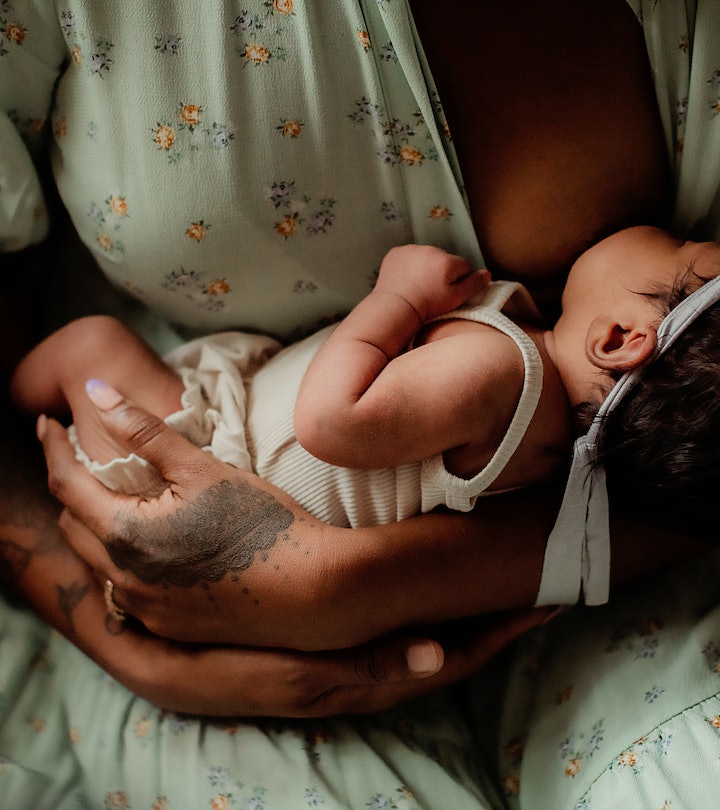 Can Breastfeeding Cause Gas in Babies?

If your baby is usually gassy, is breastfeeding the culprit?

There are few things more unpleasant for new parents than watching their baby squirm and turn red and purple from painful gas. All kinds of products promise to help a gassy baby (and his parents) finally get some relief. One method that desperate parents may try is switching up their baby’s milk supply — changing their own diet if they’re breastfeeding, switching from breast milk to formula, or changing brands of formula. But does any of that help? What exactly causes babies to be so gassy?

What Causes Gas In Babies?

Jeanne Cygnus, an Illinois-based International Board-Certified Lactation Consultant (IBCLC) who heads Cygnus Lactation Services and has worked with thousands of families, tells Romper that there are two different types of gas: swallowed air and gas that’s released during the digestive process. Babies typically swallow air either when they are crying very hard or when they are gulping — babies who are breastfeeding will often swallow less air than babies who are bottle-feeding, since they can more easily control the flow of milk.

But all babies, no matter what kind of milk they’re taking in, will have digestive gas. Bacteria in their gut will break down the sugars in the milk and release gas during the digestive process. The problem is that baby’s bodies usually aren’t as good as adult bodies at handling the gas that comes from digestion.

“Babies don’t have a lot of abdominal strength,” she explains. “And not to get too graphic, but it’s a learned behavior to release the sphincter to release the gas.” Adults know how to release, but a baby who needs to pass gas might instead clamp down and not know how to move the gas through. That’s when they become uncomfortable, and let you know it.

If You’re Breastfeeding, Should You Change Your Diet?

Both the medical literature and the IBCLCs that Romper spoke with had an emphatic answer to this question: in most cases, there’s no need to change your diet. In 2015, a team of doctors published a paper in the Korean Journal of Pediatrics that looked into whether limiting caffeine or spicy foods actually made a difference in the breastfed baby’s comfort. The doctors concluded that “popular myths about maternal diet during breastfeeding can become barriers to breastfeeding, and lead to unnecessary dietary restrictions in breastfeeding mothers” and noted that “infants rarely react to a food that mothers eat, and the few foods that have been observed to cause reactions differed among infants.” Jeanne Cygnus says that a simple rule for parents to remember is that “milk is made from blood, not from stomach contents.” Foods that don’t get into your bloodstream thus aren’t likely to impact your baby’s gas.

Kate DiMarco-Ruck, an IBCLC with The Parenting Studio, adds that some of the common myths (if you have broccoli, your baby will be up all night screaming, for instance) are unfortunate, and can lead breastfeeding parents to cut out some nutrient-dense foods that might help them feel their best. “What we find in practice is that if a baby is really uncomfortable, like they have reflux and are arching away from the breast, or spitting up to an uncomfortable-level, it might be a food allergy.” She explains that there are a few common foods that human beings tend to develop intolerances to, such as dairy, wheat, soy, corn. Often, a parent may not even realize that they also have a sensitivity or allergy to one of these foods until they start breastfeeding. She encourages parents she works with to keep a food journal and to identify what might be impacting their own gut health in order to try to determine what foods both they and their baby might have a sensitivity to.

What Can You Do To Help Your Gassy Baby?

DiMarco-Ruck says that another thing for parents to look at is their baby’s latch when they’re breastfeeding or bottle-feeding, since a better latch can help cut down on the “swallowed air” kind of gas (technically called “aerophagia”). When she consults with a family, she looks to see not just how the latch looks, but how the parent is feeling. “Are they transferring milk and everyone’s comfortable? At the corner of the mouth, can I see the baby’s tongue, which tells me there’s not a tight seal? Is there some tension in the mouth? Is the connection between their upper lip and gum a little too tight?” For bottle-fed babies, getting a low-flow nipple that will let the baby better control the pace that the milk flows into their mouth can also help. No matter how they’re feeding their baby, DiMarco-Ruck recommends that parents consult with an IBCLC who can look at their baby’s latch and see whether it might be a contributor to the baby’s gassiness.

Cygnus also recommends that parents try giving their babies warm baths, and gently massaging their baby’s stomach, making sure to massage in a clockwise direction in circling sweeps. She also suggested that letting a baby suck on something, like a pacifier, can also help trigger the gastrocolic reflex (basically, the reflex that tells your lower intestines that it’s time to move the gas through.)

But, like many parenting challenges, the main cure for a gassy baby is to remember that time is on your side, and that this problem will eventually pass. Cygnus said that she sees a common pattern: “If a mom is feeding formula, she will keep switching types of formula. Breastfeeding moms start eliminating food from their diet. They keep doing that until baby’s gut matures. And then whatever formula they were feeding or whatever food they cut out at the time their baby’s gut matured, they’ll say ‘that was the one.’ But a lot of this is the baby having to mature —as they get older it will get resolved.”