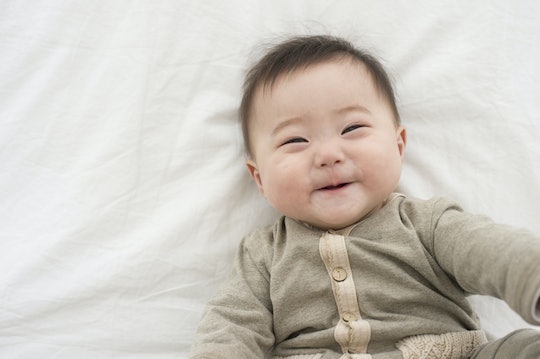 Here's What It Means If Your Baby Is *Super* Smiley

Is your baby destined to be an optimist for life?

Just like some adults have a more cheerful disposition than others, some babies seem hardwired to be happy. It doesn't take much to get a smile out of these infants, and they're usually as likely to flash a grin at a complete stranger as a family member. Some newborns even smile a lot. But what does it mean if your baby smiles a lot? Are they destined to be an optimist for life? And are they really happier than other babies?

What Does It Mean If Your Baby Smiles A Lot?

It doesn’t necessarily mean she’s always cheerful. Contrary to what experts once believed, babies don't always smile simply because they're in a good mood.

"Up until recent research revealed otherwise, we’ve always assumed that babies smiled in response to a genuine emotion they were feeling. But around 6 to 8 weeks, when a baby normally starts 'social smiling' as opposed to smiling as a reflex, she is responding to things that she can hear or faces she can see. She’ll typically smile in response to people, and less when she’s alone."

So it could be that a very smiley baby simply has more people to smile at, or spends more time engaged with a caregiver. Even then, however, her smiles could be more calculated than you'd expect. In a study published in the journal PLOS One, researchers discovered that when babies smile, they have a goal: To make the person they're smiling at smile back. Fascinatingly, scientists also concluded that babies employ surprisingly "sophisticated" timing to make their caregivers grin, smiling as little as possible to achieve their intended reaction.

"If you've ever interacted with babies, you suspect that they're up to something when they're smiling. They're not just smiling randomly," study author and research scientist Javier Movellan was quoted as saying in ScienceDaily.

In other words, yes, your smiley baby is a crafty little genius who's totally manipulating you.

Do Your Baby’s Smiles Mean They’re Destined To Be An Optimist?

While psychologists apparently used to think that our personalities later in life didn't have all that much to do with our temperaments as infants, more recent research suggests otherwise. One Russian study published in the journal Personality and Individual Differences, for example, found that babies who smiled more tended to be less neurotic when evaluated again at the age of 8, reported The BBC. Interestingly, though, babies who smiled more did not turn out to be more extroverted as children than others. So while an early tendency towards being smiley does seem to point towards some positive outcomes later on, just because your baby is generous with her smiles now doesn't guarantee she's going to grow up to be a social butterfly.

Are Your Baby’s Frequent Smiles Anything To Worry About?

There don't appear to be any significant downsides to this trait. That said, in very rare cases, constant laughing and smiling can be a sign of Angelman Syndrome, according to Psychology Today, a rare genetic disorder which can also cause severe developmental delays, epilepsy, and other disabilities. (Don't freak out, though! As the site Angelman.org explains, this condition only occurs in one out of every 15,000 live births.)

In the vast majority of cases, parents of smiley babies have nothing to worry about.

"It’s a learning process for them and they’re really just trying to process exactly what joy is, and how to share that joy with others around them that they’re gazing at."

Basically, if you've got a particularly smiley baby on your hands, all you really have to do is smile back and enjoy it while it lasts!

This article was originally published on March 4, 2018