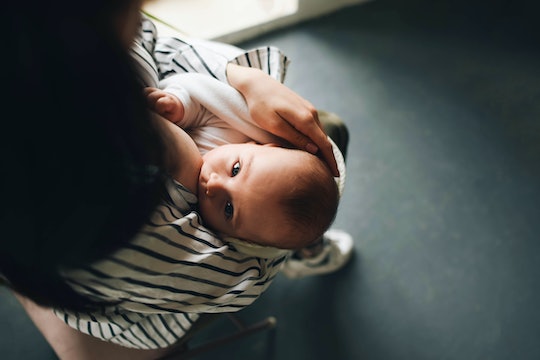 Because it’s the only time you get to sit down.

Whether you’re with a group of friends who are all having drinks or just hoping to wind down after a day of chasing your baby around, you may be wondering if it’s okay to have a drink while breastfeeding (like literally at the same time). When you’re nursing you're typically just sitting with not too much to do except scroll through your phone or stare at your baby, and a refreshing drink sounds like it could be a nice touch. I talked with experts about whether or not this is a good idea, and spoiler alert, it’s probably not, but that doesn’t mean you have to forgo alcohol all together.

Is it safe to have a drink & breastfeed at the same time?

So much of having a baby involves scheduling and planning. You plan your outings around their naps, and it turns out it also may be a good idea to plan your alcoholic drinks around their feeding schedule, even if it seems enticing to have a small drink while your baby is nursing. You may have heard that the “safest” recommendation is for breastfeeding mothers to have no alcohol at all; but you’ve already given up beer, wine, and cocktails for pregnancy and it’s a lot to ask that breastfeeding parents continue that for as long as they’re feeding their child. “Depriving breastfeeding women of the ability to have an alcoholic drink or two is another barrier to breastfeeding. Women can drink and breastfeed, they just need to drink in a timely and moderate manner,” Mindy Cockeram, certified childbirth and breastfeeding educator and author of Breastfeeding Doesn't Have to Suck: Tips, Tricks and Knowledge for a Great Experience tells Romper.

“‘Safe’ and/or ‘advisable’ are tricky generic terms to quantify because the exact (or even possible) effects of infant alcohol intake over time can never be ethically studied in a randomized control trial,” Cockeram says. “However, because of the way alcohol enters breast milk, the ‘safest’ or ‘most advisable’ recommendation is from the Center for Disease Control (CDC); they advise breastfeeding parents to wait two hours after a standard alcoholic drink before feeding the baby.”

A standard alcoholic drink is typically 12 ounces of five percent beer (you’ll want to check the label because many specialty beers are a higher percentage than five), five ounces of 12 percent wine, or one and half ounces of 40 percent (80 proof) liquor.

“It is not advised to drink and breastfeed at the same time for two reasons: alcohol travels quickly from your bloodstream into breast milk (so the alcohol in the drink you are having might get to your baby quicker than you think) and drinking alcohol can impair one’s judgment and ability to care for their baby,” Dr. Jessica Madden, board-certified pediatrician and neonatologist, International Board- Certified Lactation Consultant (IBCLC) and Medical Director of Aeroflow Breastpumps, tells Romper. She adds that you also risk spilling an alcoholic beverage on your baby if you drink while breastfeeding, and no one wants to change a sticky, cocktail-coated infant.

How do I know how much alcohol is in my breast milk?

It’s a misconception that breast milk has the same percentage of alcohol as whatever the mother was drinking (so if you have a five percent beer, for example, that does not mean that your breast milk now contains five percent alcohol per serving). What is true is that alcohol concentration in breast milk is almost identical to that of the mother’s blood alcohol level at the time the baby transfers milk into his or her body.

That classic advice you’ve heard a million times about having something to eat before you drink is especially important to heed when you’re planning to nurse shortly after or while drinking. “The best advice is to eat before or at the same time as one is drinking. Food, particularly carbohydrates, lessens absorption and may reduce blood alcohol absorption levels by up to 75 percent compared to drinking on an empty stomach,” Cockeram tells Romper. Typically, when you’ve eaten something, alcohol in the bloodstream and breast milk will peak around 30 to 60 minutes after a drink, but some will be present immediately. And interestingly, drinks aerated with carbon dioxide, like champagne or other bubbly libations, get into the bloom stream more quickly, Cockeram says.

If you’re trying to be super careful, there are also breast milk test strips you can use which will report the amount of alcohol in your breast milk.

What if I accidentally feed my baby alcohol in breast milk?

It’s helpful to remember that baby’s bodies metabolize alcohol more slowly than adults, which is why it’s best not to breastfeed and drink simultaneously. “Even though the alcohol that a baby is exposed to in breast milk is only a fraction of the alcohol content that the mother originally drank, it takes babies nearly twice as long to metabolize it, therefore staying in their body longer,” Cockeram says.

If you’ve had just one or two drinks, the amount of alcohol your baby actually receives will be minimal (no, they will not be drunk). Instead you may notice that they don’t sleep as well, but some research suggests that this is not from the alcohol, per se, but more a result of the way alcohol affects milk production. Studies and findings from the CDC show that alcohol may hinder letdown (the reflex that allows milk to come out of the breast) though this usually happens with around five drinks. Theoretically if you’ve had a few drinks, your baby may feed for the same amount of time, but they could be getting less milk, which could lead to fussiness, hunger, or interrupted sleep.

Maybe now you’re thinking about that time someone told you that beer helps boost milk supply, but Dr. Madden says that’s largely a myth — plus if there is any truth to it, any boost in supply is attributed to barley and hops, more so than the alcohol, according to a study in the Drugs and Lactation Database (LactMed). Madden also adds “pumping and dumping” after drinking alcohol has no effect on how much alcohol will be present in your breast milk, it’s simply a way for a mother who has had some drinks to feel less engorged and more comfortable.

“Everyone has different comfort levels with [breastfeeding and drinking],” Katie Clark, a certified lactation educator and founder of The Breastfeeding Mama tells Romper. “Each parent needs to read the data that is available and make the best decision for them. Ideally, plan your drinks [for] soon after you nurse your baby, so hopefully you won't nurse for a while. “ She adds that having some frozen milk on hand can be helpful too for those times when you want to have some drinks without thinking about feeding. You can certainly give your baby a bottle yourself a glass of wine at the same time.

Katie Clark, a certified lactation educator and founder of The Breastfeeding Mama

Mindy Cockeram, certified childbirth and breastfeeding educator and author of Breastfeeding Doesn't Have to Suck: Tips, Tricks and Knowledge for a Great Experience

More Like This
Is It Safe To Pump While Pregnant? Experts Weigh In
Here's Why Your Vagina Burns After Sex
Why Your Vagina Smells Like Fish & What To Do About It
Here’s Why You & Your Mom Can Fight So Much
What Parents Are Talking About — Delivered Straight To Your Inbox