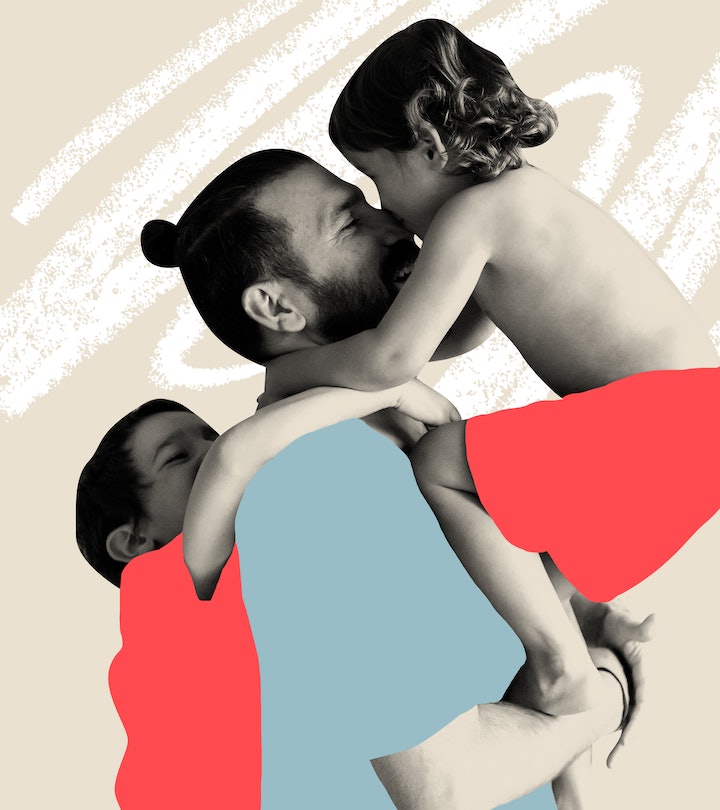 The Life Changing Art Of Teaching Your Child Happiness

An excerpt from Fatherhood, the new book from the editors of Fatherly.com.

The following is an excerpt from Fatherhood: A Comprehensive Guide to Birth, Budgeting, Finding Flow, and Becoming a Happy Parent, from the editors of Fatherly, the largest online advice platform for dads. Fatherhood is he ultimate guide for equipping new and expecting Fathers for almost every aspect of parenting — with both confidence and joy.

When parents say they just want their kids to be happy, they are often considering happiness as the state of being possible only in the absence of pain, stress, or adversity. The goal becomes erasing the trials and tribulations from a child’s life and attempting to manage away negative emotions. When those emotions emerge — there is no scenario where they don’t — parental frustration leads to anger.

According to psychologists and social scientists, happiness best understood as a pervasive sense of well-being. And people who feel a strong sense of well-being generally share the same set of qualities: resilience, a sense of purpose, spirituality, gratitude, and healthy, meaningful relationships with family, friends, and community.

Resilience appears to be key. What good is happiness if you are derailed by and dwell on adverse setbacks? To have a sense of well-being is to know that you can make it through the hard stuff, says Joan Durrant, associate professor of Family Social Sciences in the faculty of Human Ecology at the University of Manitoba. To get there, some hard stuff is required. And Durrant knows from hard stuff. She studies abuse in families and ways that parents can orient towards positivity and well- being to build better relationships.

The trick is in catching our brains experiencing contentment and happiness and dwelling on those moments when they occur.

Durrant cites an example from her own childhood. When she was a little girl, she was devastated by the loss of a balloon that she’d let fly away. Her parents sat with her and let her feel her feelings because that sadness and loss wasn’t something to be feared or chased away. There was no urgency to move on, she says. By simply being with her in her moment of pain, her parents helped Durrant realize that loss is hard and life goes on.

Eventually they passed away. “Those are big balloons to lose,” Durrant says. “But because they never invalidated my feelings, I was okay. Being happy does not mean having no sadness in your life but having an inner contentment.”

Durrant notes that there’s no real trick to happiness, that it’s basically a product of classical conditioning — a kind of Pavlovian reinforcement built on brain connections. But kids don’t learn to drool at the sound of a bell (they’re probably drooling already); they learn to adjust in the face of adversity. Punishment doesn’t teach this. Neither does success. Life teaches this, and so it becomes incumbent upon parents to be honest about what life is: “what happens to us while we are making other plans,” in the memorable and shockingly biologically accurate formulation of cartoonist Allen Saunders.

There’s a phrase often trotted out by neuroscientists that backs up Durrant’s claim: neurons that fire together wire together. That’s why classical conditioning works the way it does. Every time neural pathways in our brain fire, connections between neurons are made. Sometimes these connections are fleeting. But if those pathways fire consistently, they are reinforced and become stronger. While this works for getting dogs to drool on cue, it also works in changing the way we perceive the world. The trick is in catching our brains experiencing contentment and happiness and dwelling on those moments when they occur — in common practice: mindfulness and gratitude. That recognition helps the neural pathways get stronger.

Of course, it’s hard for parents to help a kid understand mindfulness when they have a hard time practicing it themselves. This is why, according to positive psychologist Robert Zeitlin, parents should start working on changing their own minds before a baby even arrives. In his private practice, Zeitlin leverages the emerging science of happiness to help the families he works with increase their joy and well-being. He notes that pleasure is often the unconscious drive that drove his clients before they became parents in the first place.

“I don’t think many parents are prepared for the onslaught of unconscious motives that kick in, driving their behavior all the way through parenting,” Zeitlin says. “The sooner partners can have a conversation and find ways to make those unconscious motivations more conscious, the better things will be. If you’re not aware of these things, they will rule the day.”

That’s essentially what forty-five-year-old stay-at-home dad and one- time University of Miami football coach Joseph Fowler and his partner, Kristine, did, before even having their first child. The pair began focusing on their values shortly after she became pregnant. What they learned is that they were driven by curiosity, particularly when it came to travel.

“We knew money was going to be tight as a single-income family. So we wanted to prioritize experiences and not indulge in consumerism,” Joseph says.

Their clarifying motto became a family hashtag that they adopted in their social posts, almost in lieu of a motto: #ExperiencesNotThings. From the outset, the Fowlers were set on exploration.

Their children are eleven and nine years old now, and they’ve been around the country and even traveled to Cuba in 2019. The focus on adventure has clarified how the family lives and how the children have grown. And it has changed the family’s relationship with money.

“If we go out to eat it will be eighty bucks at least because there are four of us,” Joseph says he’s told his children. “If we spend that money on dinner, that’s less money that we have for an adventure. So do we want to go out for hamburgers or save that money for a fun adventure?”

The choice is adventure, nine times out of ten.

By simply being with her in her moment of pain, her parents helped Durrant realize that loss is hard and life goes on.

Researchers have repeatedly found that consumers overestimated the sense of the value of material goods. It makes sense then that the Fowler family, who prioritize shared experiences, seem so happy. They have respect for the journey and, having put on some miles, understand that nothing goes smoothly all the time, least of all life. This informs not only the family’s ability to handle adversity day to day but how Joseph thinks about the future.

“If it’s not college, then I’ll be happy if they are productive members of society and find a career that they find joy in and supports them,” Joseph says. “Most of us are just regular folks who want to be content with life and what we’ve earned and been given.”

More Like This
The 55 Best Chapter Books For Kids At Every Age
I’ve Learned A Lot Raising Black Multiracial Children. Here’s What I Want Fellow Parents To Know.
The Disappearance Of Children’s Recreational Sports
13 Kid-Friendly Ghost Stories For Littles Ones