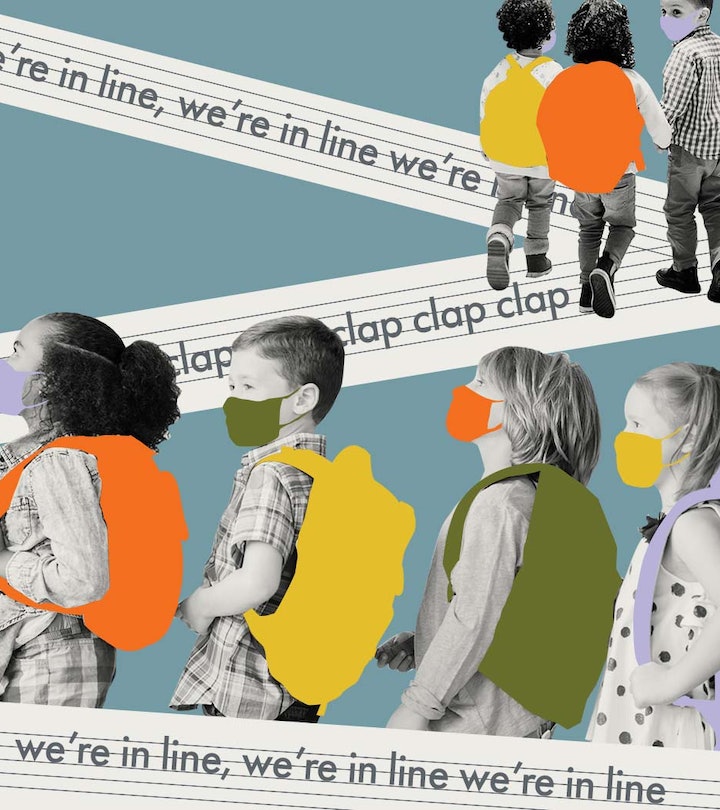 In School, My Child Has Learned The Joys Of Getting In Line. I Am Thrilled.

My 6-year-old did fine at home during the pandemic. I was surprised by how much better school is.

I’m doing bed time, well, trying to anyway, lying between my daughters, ages three and six, my six-year old insistent on sharing the song she and her classmates sing when getting lined up at school.

We’re in a line, clap clap,

We’re in a line, clap clap,

I’m surprised to find her so entranced by this get-in-a-line business. At home, she’s independent, loquacious, imperious, charismatic. She thrills at negotiating and relentlessly picks at my rules. But she’s been in first grade for about a week, after a year and a half of doing school in the living room, and her tune has changed. Now what she sweetly seems most excited about is this getting assembled theme song and its accompanying gestures. Huh.

For the second verse, she feverishly explains, they sing, “We’re in a line” and then they cluck cluck with their tongues, because at that point, they’ve traversed the room from their various amusement stations and are lined up, holding hands with each other, and, therefore, not clapping anymore. We’re in a line, cluck cluck.

“Never let school get in the way of your education” was something frequently said in my household growing up.

I do not remember first grade. Not a thing. As a kid, I was a union card-carrying actress, and I got to leave school for performances, auditions, and shoots. This is basically all I remember about elementary school, the thrill of getting to leave it for some portion of the day, to be around adults, artists, crew. “Never let school get in the way of your education” was something frequently said in my household growing up.

Maybe you’ve never been in a choreographed musical number, but I was in a bunch, and there’s nothing quite like singing and moving in tandem with other people. The moment to moment has a thrilling momentum. You’re being carried along and you’re carrying along. The whole world makes sense. And your place in it. You know exactly what’s coming next and what’s coming after that. I could really use some of that these days, huddled at home, watching the world not cooperate.

My daughter could really use some of that, too. We spent most of the pandemic in a house deep in the woods, isolated but safe. It’s not difficult to imagine how enthralling it must be for her to be back in a city groove with newly mastered lines and movement, to be amidst a coordinated troupe of 19 five and six year olds — most of whom have been doing remote school through iPads for a year and a half — now singing, moving, holding hands, together in unison, heading to the thrilling destination of recess, or to the arms of their caregivers at the end of the day. She’s part of a collective now.

I was a little cavalier about selecting a school when my daughter first aged into pre-K. We live in New York City, where there are always choices to be made, options to be weighed. I had absorbed the lessons my parents instilled in me: Life experience trumped classroom learning, boldness favored over conformity. Friends of mine obsessively researched and networked and toured and interviewed, while I picked the public school closest to our apartment, spent six or seven minutes on the online DOE application and was pleased that she got in to a conveniently located establishment. To my surprise, in the time between the first day of pre-k and the first day of the lockdown, I fell utterly in love with her thoughtful, joyous school, and swelled in gratitude nearly every day for the ways they organized, educated, and enlightened my kid.

My daughter has done fine in my improvisational, authoritarian regime, but I believe what’s best for her is to be in a collective, in a rhythm, in a child-centered world free from the adult tensions in our household.

I’ve probably spent hundreds of hours debating, in my own head mostly, the decision to put my six-year old back into school before vaccinations are available for young children. Her little sister has a serious heart condition and we really don’t know how she would fare if she contracted Covid. Some parents fret about their kids falling behind academically if they miss in-person school; I don’t. Some parents depend on school utterly for their kids’ safety, nutrition, childcare; I also don’t. Many parents rhapsodize about the socialization that school engineers; I don’t. I know that if my daughter were not in school she would have social contact here and there and at the playground and maybe it wouldn’t be perfect socialization, whatever that is, but it would be adequate, until she and her sister could be vaccinated. My daughter would be fine without school for a few months longer.

But still, we let her go. She’s done fine in my improvisational, authoritarian regime but I believe what’s best for her is to be in a collective, in a rhythm, in a child-centered world free from the adult tensions in our household. My father, a retired pediatrician and epidemiologist, ok’d the precautions the school was taking, and my husband and I let her go, released her, watching from a distance as her mighty little legs ran through the courtyard towards her new life.

Two days in, we received an email that a student in the school had tested positive for Covid. My fear spiked: Why am I doing this, why am I letting her do this?

I don’t entirely have an answer to that question.

For the moment, though, it is night, I am doing bed time, and my daughter is filling her day’s last conscious moments with thoughts of singing and clapping and clucking and hand holding in unison with her classmates. Laying next to her, in the minutes before my own restless turn across the night begins, I’m briefly at peace.