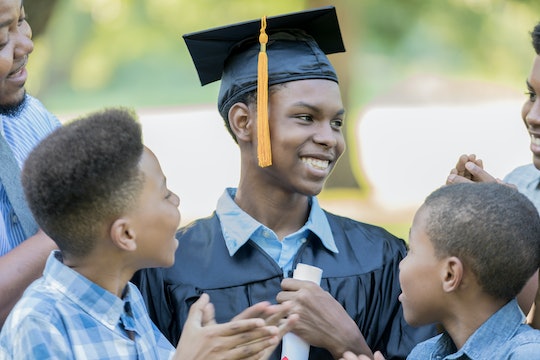 My Firstborn Leaves For College In 63 Days — How Much More Parenting Can I Squeeze In?

For the first time in 18 years, I am confronted with an absolute truth: We have a finite time to teach and influence our children.

Three thousand, three hundred, and eleven miles. That’s how far away my firstborn will be this fall attending college in England. Don’t get me wrong, I’m extremely proud of him, and I really am not the helicopter parent. But for the first time in 18 years, I am confronted with an absolute truth: We have a finite time to teach and influence our children.

When our kids are grown they will seek our opinions and advice, but it will be on their terms. I have now come to realize that I have less than 63 days to find out if I “got it right.” It's a terrifying thought. How will my firstborn fare?

I reassure myself that starting college now isn’t the Wild West it was when I went, over 20 years ago. Student affairs is a whole department dedicated to welcoming freshmen and providing all the support for success. There are systems in place for them to get oriented, meal plans so they don’t have to cook, and some colleges go even further, to ensure that adjustment happens in stages. Some freshmen aren’t allowed to have single rooms as a way of encouraging community and preventing isolation. Others don’t allow freshmen to have cars on campus.

These efforts speak to colleges taking a more wholesome approach to college life, and I applaud them. But they don’t change what I lose sleep about.

I remember not sleeping for two weeks when I first started college. Terrible homesickness led me to stare at my bedroom ceiling every night, for the entire night.

We all have our personal concerns that we focus on. What I lose sleep about are potential substance abuse and mental health struggles. As a woman who has experienced the reality of depression, I know all too well how overwhelming it can be. I remember not sleeping for two weeks when I first started college. Terrible homesickness led me to stare at my bedroom ceiling every night, for the entire night. College kids aren’t immune to this. My son has never had an issue in these areas, but I know that isn't a guarantee he never will. I can only hope that the camaraderie of team life and coaches will save my son from this.

According to Timothy Neal, assistant athletic director for sports medicine at Syracuse University, "1 in every 4-5 young adults has mental health issues, but what is unique about the student-athlete is they have stressors and expectations of them unlike the other students that could either trigger a psychological concern or exacerbate an existing mental health issue." How does a parent support a child who is physically so far away? It will take me at least seven hours to get to him, guaranteeing that I can never make it in time if there is an emergency. That 3,311 miles is scary as hell.

Everyone says he’ll be fine, and for the most part I agree, but I still find myself lying in bed at night, wondering how prepared he is for the transition. Is he emotionally ready? What kind of conversations do I have with him to assess his readiness? I do spare a thought about the consequences of his bad budgeting and him failing a class. It’s mostly an overestimation of his dependency on me. After all, which child can really survive without their omnipresent mother?

Sometimes I obsess about the statistics around college athletes and substance abuse; 44% of male athletes reported binge drinking, for example. Those are not numbers that any parent finds comforting.

Everyone says he’ll be fine, and for the most part I agree, but I still find myself lying in bed at night, wondering how prepared he is for the transition.

So, like every other self-respecting mom who is spiraling, I overcompensate in other areas. The areas that I convince myself that I have control over.

I’m sending a fully domesticated child to college. He’s been doing his laundry since he was 12 years old, and cleans like a veteran housekeeper. His baked chicken and mashed potatoes are to die for. I knew he had the seal of approval when he cooked a pot of rice without it sticking.

He’s been making all his doctor appointments on his own and going by himself. I eliminated curfew since he’s been fully vaccinated against COVID-19. This is really for my benefit — in less than 60 days I will have no clue where he is and won’t be able to ask. I need practice.

My last task is teaching him how to drive. The 18-month pandemic really screwed up that plan, so I’m running against the clock. This might be the last thing I can teach him from scratch — the last legitimate excuse for him to spend time with his mom during this crazy summer that is both an emergence from a pandemic and the last hurrah before college.

So I have a schedule: 30 minutes of instruction and driving practice daily. I dare not overstay my welcome. I try to couch the driving instructions with life nuggets. Like, you're in control of the car. Don’t take your hands off the wheel or eyes off the road. Also, you ultimately decide which direction the car goes. Make sure that your rearview and side mirrors are properly aligned. Situational awareness helps keep you alive.

I’m sure he knows what I’m doing. Being the good child that he is, he cooperates. As I send off my brand new adult this fall, I’m trying to accept that the most important thing is that he’s confident in himself and in the assurance of my unrelenting love and support. And I try to tell myself that with those 3,311 miles, that’s his greatest asset.