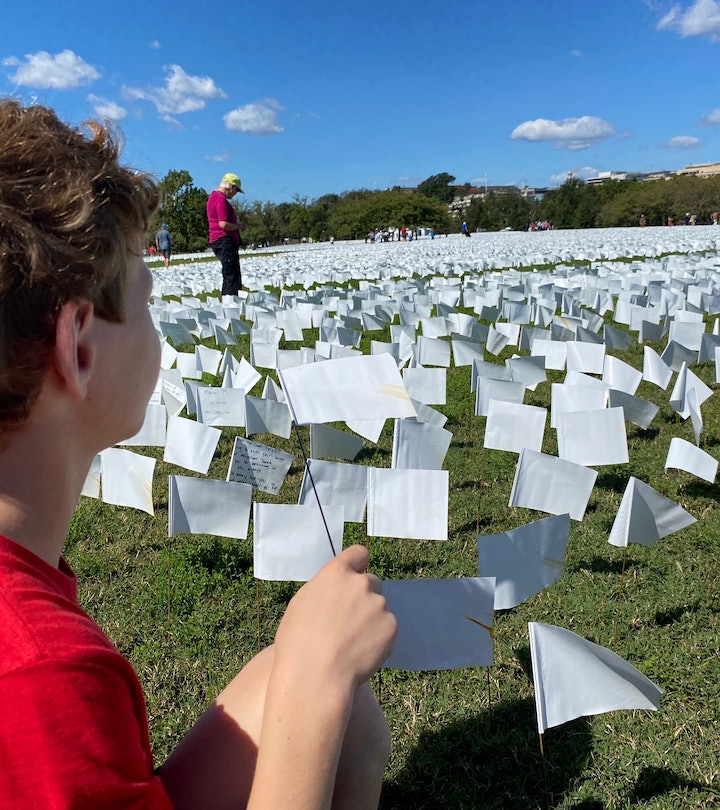 Teaching My Son To Mourn In The Age Of Covid

The white flags of the national Covid-19 memorial became her headstone. That little flag said my son’s grandmother was here, and that she had been loved.

A little over a year ago, I took my son to see my mother for the last time. Now her ashes sit in my attic, a reminder of her life and her death, but not quite a memorial.

We were in some of the darkest days of the pandemic, and the rules at the assisted living facility where she lived were strict. You had to be 12 years old to visit. That ruled out my younger son, who was only 7. But my eldest, Luke, was 11, and he had a way of making my mom smile like nobody else. It was her 79th birthday. So I told Luke that we were going to lie, just this once, and for a specific reason. He would be 12 that day. “OK!” he said, clearly up for it.

When we arrived, the woman checking us in insisted kids had to be over age 12 to come in, even for an outdoor visit. No, I said, the rule says 12 and up. No, she said, it’s over 12. After a short standoff I said, “OK, he’s 13, and he’s going to see his grandmother on her birthday.” She let us in.

It was, in truth, a sad visit. Dementia was robbing my mom of her ability to speak. She appeared to fall asleep in the middle of the conversation. But when she saw Luke, her entire face lit up. And social distancing be damned, he gave her a huge hug.

Three weeks later, she was dead of Covid-19, the pandemic stealing the end of her life before the creeping dementia could inflict its far more torturous damage.

The fact that I’m now storing my mother’s urn in my attic might not unsettle her as much as you might think.

She wanted to be cremated, and she asked that her ashes be spread in two places. She named the Pacific Ocean, the water that surrounds Hawaii, where she found love in a second marriage and embraced the aloha spirit. Her second spot is the rose bush behind the house where my sister and I grew up in Shaker Heights, Ohio. My mom was notoriously bad at keeping plants alive, but that bush had thrived and bloomed. A lifelong atheist, she said she saw something like God in those roses.

I was worried that Luke wouldn’t understand her desire to be cremated, but I finally got up the courage to talk to him about it. It turns out he had read about it on his own, and he knew that the body is burned into ashes. I explained that she didn’t want to take up precious space on the Earth and he replied, “That’s really brave and really considerate.” Considerate, he said, of the people coming after.

I showed him the urn, shiny black with gold butterflies. “Isn’t this beautiful?” I said. Yes, he said, and he gave the urn a hug.

We memorialized our mom via Zoom, but we haven’t done any of the rest yet. Presumably the bulk of my mother will land in the ocean, and just a bit on the roses, assuming the current owners of the house aren’t too freaked out by the prospect. My sister, Amy, and I are planning a family trip to visit the Pacific; I haven’t had the gumption, yet, to talk with the owners of the house on Scottsdale Boulevard about my mother’s last wishes. For now, she sits in the attic, tucked away near a collection of items that mark her presence here on Earth, the papers and photos and mementos we thought worth keeping.

A few years ago, Amy and I had moved our mom and stepfather to the D.C. area, where I live. The move had been challenging. My mother was, to put it gently, a saver. She saved her elementary school report cards and newspaper clippings marking her passage of the bar, tangible proof of the newsworthy nature of a woman becoming a lawyer in 1965. She saved telegrams congratulating her on her wedding to my dad and letters to and from her mother in her first years of marriage (including a description of the Tupperware party she’d just attended, and the Jell-O mold she’d bought). She saved hundreds of unsent birthday cards, some of them labeled with small sticky notes or pencil markings indicating who they were intended for: “Luke, 8th birthday,” for instance, though his eighth birthday had passed.

She saved years-old rain checks from the grocery store and dozens of boxes of Ziploc bags and shelves of expired food and piles of VCR tapes and so much more. So the fact that I’m now storing my mother herself in my attic might not unsettle her as much as you might think.

One day, Luke and his brother will have to decide: Do we keep this? How about that? And I wonder how much — if any — of it will be meaningful to them. Someday, they will sort through photos of her family growing up and maybe wonder who those people were. I wonder if they will be as amused as I was when I found a note to my mom from her pediatrician with instructions for caring for her newborn baby, me. His list included the advice to “RELAX and enjoy her!” and maybe he knew she needed a nudge toward relaxation.

Maybe they’ll read the speech she delivered to me on my bat mitzvah and learn that once, when I was 3 years old, my mother was overcome with emotion and said, “Oh, Laura, I love your face.” I had apparently replied, “Don’t be silly, Mommy. You don’t love faces, you love people.” She said her point was that, from the beginning, I’d forced her to be honest, which probably has some truth to it. But I hear that story today, as a mother myself, and I love the image of her looking at me and feeling overcome with emotion. Maybe my kids will remember that I told them that I loved their faces, too.

And Luke will have his memories too. When I asked him what he remembered most about his Tutu, the Hawaiian word for grandmother, his first thought was their last dinner together at McDonald’s. I remember that evening as filled with stress. My mom and stepdad had taken the kids on their own and got lost on the way back to our house, an early dementia flag. It was 8 p.m. on a school night and they still weren’t home, and weren’t answering their phones. But Luke remembers eating french fries across the table, and playing with the toy from his Happy Meal on the way home. “We were making some pretty funny jokes,” he said. “They were actually really bad jokes. We were laughing about that.”

At the National Mall, the author’s sons plant a white flag in honor of their grandmother, who died last fall of Covid-19.

I recently took my kids to an art installation on the National Mall called “In America: Remember,” where a small white flag was planted for every Covid death in the U.S. I thought this might be a kind of mourning rite for us — for him. Luke may be holding onto his happy memories of Tutu, but seeing the sheer volume of death was almost too much for him, and he had a lot of trouble walking among the hundreds of thousands of flags. It was wrong, he said, that so many people died. I know, I said, and what else could I say. You’re right.

The memorial was a stunning marriage of technology and emotion. Anyone could enter the name of a loved one who died from Covid-19 into a web page. You were issued a number, which corresponded to one of those little white flags. You were then invited to write something on your flag, anything you like. Images of all the flags, searchable by name, are posted online.

We registered and collected our little flag, and each of us wrote something on it.

His brother, Zander, wrote, “I (heart) you. Remember you are always a part of us.”

At the Mall, Luke and Zander picked out a spot and put our flag into the ground, and we looked at it waving in the wind. And I took some photos of it, knowing the exhibit was being dismantled a week later.

That little flag said my mom was here and that she had been loved. It said she was a mom, and a Tutu, and that she will always be a part of us.

To me, it felt like the closest thing I might ever have to a gravestone, and I suddenly understood in a way I never had before why those things matter to people. That little flag said my mom was here and that she had been loved. It said she was a mom, and a Tutu, and that she will always be a part of us.

And I then thought about my attic, at the moment a graveyard for one. And I know she didn’t want a grave or a headstone, and even if I did, I have no idea where it would go. One day, when our stepdad dies, he’ll be buried with his family in Detroit. My mom didn’t even want to spend Thanksgiving in Detroit, so I don’t think she’d want to be there for eternity.

It will be the Pacific Ocean, someday, and the rose bush, hopefully. And I’ll have those letters and the speech and the note from the doctor, and I’ll have my photo of a small white flag waving in the wind. And someday Luke and Zander will have these things. And they will know she was here.

Laura Meckler is an award-winning writer for the Washington Post, where she covers national education issues. She is currently working on a book about her hometown of Shaker Heights, Ohio, and its long-term relationship with issues of race.