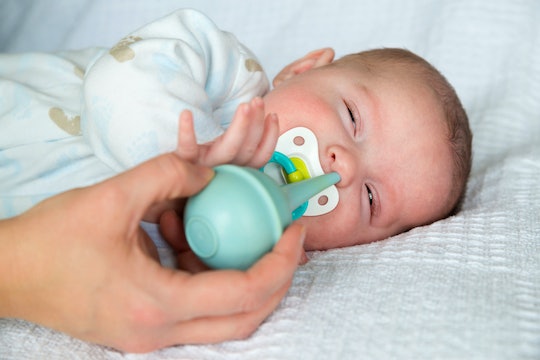 When you go home with your baby, you typically go home with a few things that the hospital gives you. One of these is a bulb syringe. It looks like a small rubber ball on a funnel with a tip, and it's used to aspirate the nasal passages of your baby when they're suffering from a congested nose. It's really simple to use, and many parents get really good at wrangling their baby in place for suction really quickly. However, you can do it too much. How often should you suction a baby's nose, according to the experts? Maybe not as often as you think.

Babies have tiny noses that get easily clogged. They're also really sensitive, with loads of tiny little capillaries right at the surface that are irritated and damaged without much agitation. If you've ever seen your child give themselves a bloody nose from scratching it, you know what I'm talking about. Their noses also dry out fairly quickly, according to the Journal of Aerosol Science. Therefore, the use of saline and either a bulb syringe or Nosefrida suction device has to be limited to attempt to avoid accidental injury or irritation of the nasal passages. Nationwide Childrens' Health Systems recommends doing it no more than two or three times per day. No one wants a nose bleed.

Suctioning your baby's nose is really gross — there's no way around it — but it's really useful. For some reason, even though I legitimately gagged through suctioning my children, I found it oddly satisfying and fascinating. Sure, I had to swallow and hold my breath as I cleaned the bulb afterwards, but they just breathed so much better as soon as I suctioned their tiny noses. Also, the sound of it is not something you'll soon forget. That squishy straw sound is so, so disgusting, but it lets you know it's working. Even if you have to choke back the bile that rises to your throat as you use it.

Especially if you're using the Nosefrida, which, good on you because I cannot siphon snot out of my child's head with my mouth. I realize you don't end up with a mouth full of mucus — logically. I get that. But I simply cannot abide even the thought, and so that's a big, fat hell nope for me. However, there are a legion of parents who swear by the snot sucking device, and would banish me to the outer reaches of the universe for nay-saying it.

If you are wondering how often you should suction a baby's nose if they're extra congested, unfortunately, the number remains the same — two or three times. Thankfully, there are other ways to clear baby's nose that don't have anything to do with suction. The website for Dr. Sears suggested giving baby more fluids and encouraging them to drink. This will loosen secretions and help them breathe more easily. They also suggested using a cool mist humidifier to aid in their breathing, because warm, dry air irritates sensitive tissues, causing them to swell up and get congested.

When my babies were really congested, I'd sit in the bathroom with them and run a hot, hot shower, filling the room and their little noses with lots of steam. As soon as we stepped into the cooler surrounding rooms, their noses would run like a fountain, and their breathing would improve dramatically.

Just remember, as much as you may be tempted to give them medications for their cold, like Mucinex or Robitussin, knowing how much they help you, the FDA says this is a big no-no. They're simply unsafe for the little ones under the age of 2, and should generally be avoided up to age 6. Until then, get used to the grossness, because you're all over it for awhile.

More Like This
Can You Burp A Baby Too Hard? A Pediatrician Shares Tips For Gassy Tummies
Is It Good For Babies To Be Exposed To Germs? It’s Complicated
When It’s Safe To Bring Your Newborn To A Restaurant, According To A Pediatrician
Baby Growth Spurts: When They Happen & What To Expect