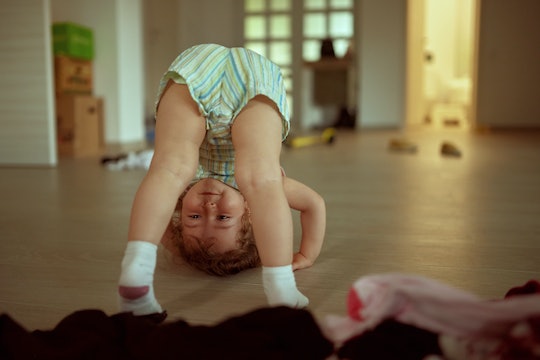 Everything You Need To Know About Your Toddler's Pooping Frequency

You had no idea you could get queasy thinking about soft serve ice cream, but here we are.

Before you become a parent, it's weird to imagine that you might ever be concerned with the bathroom habits of anyone but yourself. Once you're in charge of a tiny human, though, that changes. From the moment that baby is born, you know every detail about how they go to the bathroom — and then you start obsessing. Are they going too much? Not enough? Could they be constipated? Why is it always so runny? And, oh goodness, why is it that color? This doesn't change when your child is no longer an infant. As they get a bit older, you'll have questions like if your toddler is going enough and how often a toddler should poop.

Unfortunately, it can be hard to get solid answers to those questions. Just like adults, the bathroom habits for toddlers can vary from person to person. It's hard to find a definition of "normal" when what works for one toddler's body may not be the same as another's, even if both are perfectly healthy. Still, there are things to watch out for so that you can know if you need to speak to your child's doctor or not.

Pediatrician Dr. Doug Later of Utah Valley Pediatrics tells Romper, "The stooling pattern for a toddler can vary significantly from child to child. Some children may go number two several times a day, while others may go once every other day or every two to three days."

If you've noticed that your child seems to be pooping a few times each day, that's not immediate cause for concern. "It can be normal," Later says. "It can be related to diet. Children who are better hydrated and have more fiber in their diet tend to have more regular stools."

The key is to try not to spend too much time obsessing over how often your toddler is going. "The variability in what can be a normal stooling pattern causes a lot of stress for some parents," Later suggests. For that reason, he recommends that instead of focusing on how often your child is pooping or not pooping, you should focus on what their diaper (or toilet) actually contains. "I think it is more important to focus on the consistency of the stool rather than the frequency," he says. "We want their stools to be soft, not too hard, and not loose or watery." So, yes, that means you may have to examine their stool if you're feeling concerned.

Seattle Children's Hospital backs this idea up. While a toddler should be going number two at least once every one to two days, the hospital website also noted that it's more about the consistency of what's coming out of them than the frequency. It should look like soft serve ice cream (I'm very sorry if that just ruined soft serve ice cream for you) to be considered healthy and normal.

When keeping an eye on your child's stool, pay attention to how often they have loose poops. "When a child has watery diarrhea five-plus times a day, we need to watch for signs of infection and dehydration," Later says. If this is happening to your little one, you should probably call their pediatrician — it could mean they have a virus or that something else is going on that deserves some medical attention.

You also want to look at the color of their stool to be sure there's no cause for concern. Johns Hopkins Medicine has an online guide for what the many possible colors of a toddler's poop could mean. In general, red and black stool could be a sign of internal bleeding, and white stool could be a sign of a serious condition, so both are something you should contact a pediatrician about. Dark yellow, brown, or green colors are generally normal, and remember: their poop can also change in color depending on what they're eating.

Signs Of Constipation In Toddlers

The last thing to watch out for is signs of constipation. Maybe your toddler is barely going number two at all, and you're starting to wonder if it's giving them trouble. "A child with large, hard, formed stools may have significant pain with stooling and even bleeding," Later says. "This can lead to more difficult problems if it is persistent and untreated."

If you feel like your child is constipated, don't freak out: constipation in toddlers is very common, and you can actually try to help them at home before calling a doctor. Later says that one of the best things you can do is make sure they're adequately hydrated. "Encourage more water intake," he says. "Other dietary changes, such as increased fiber and vegetable consumption, can help. Occasionally a small glass of juice once a day can help keep bowels more regular." If constipation persists or just seems to keep coming back, it's worth talking to a pediatrician about.

More Like This
Covid Vaccine “Deserts” For Kids Under 5 Make It Almost Impossible For Parents To Find Shots
A Parent’s Guide To Stomach Pain In Kids
The Cute Reason Why Toddlers Love To Sleep With The Blanket Over Their Face
Cradle Cap Is Normal & So Is Your Desire To Get Rid Of It. Here’s How
What Parents Are Talking About — Delivered Straight To Your Inbox