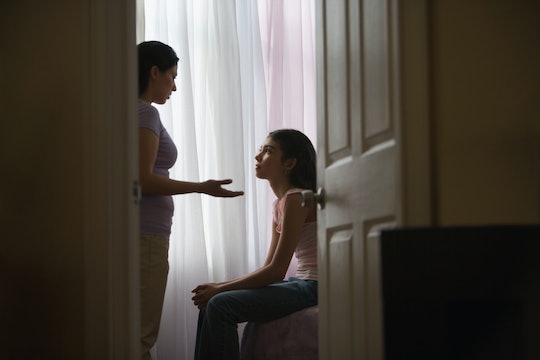 You’re not imagining things: The pandemic has made parent-child negotiation more intense. Experts share their tips for easing the tension.

In Charles Stella’s house, the battleground is dinner. It’s the one meal the family eats together and every day, he says, his daughters attempt to negotiate the terms. How long do they have to stay at the table? Which foods do they have to eat? Could they eat less of their vegetables tonight and more tomorrow? Would that still qualify them for dessert?

Plenty of nights, these sessions have driven Stella to bribery, in an attempt to cajole the girls, ages 8 and 4, into trying a new food. “I’ve caught myself saying, ‘Here, try this butternut squash and I’ll give you a handful of Skittles,’” he says.

Stella has found himself mired in a Sisyphean process that will be all too familiar to many parents: negotiating with kids. Thought you’d established the rules or set the boundaries? Think again. You are in for many more rounds, which can range from reasonable discussion to impassioned pleas or outright whining. It all fits the definition if you “have different preferences and are trying to come to an agreement about them,” write Terri Kurtzberg and Mary Kern in their book Negotiating at Home: Essential Steps for Reaching Agreement with Your Kids. These sessions can vary in intensity, frequency, and the annoyance they create for adults (your kids may not be having any fun, either).

The pandemic has forced families into more extended time together, creating more opportunities for friction, and thus negotiation.

The pandemic has forced families into more extended time together, creating more opportunities for friction, and thus negotiation, with real consequences for parental stress. Middle-class families, especially highly educated ones, are reporting greater increases in frustration with their children over the last year, according to data from a nationally representative survey that Calarco conducted. They’re also reporting more frustration and anger from their children during this time. That may be a factor in why nearly 70% of parents with bachelor’s degrees choose in-person learning over remote school when given the option.

“I suspect given interviews that we’ve done with parents during the pandemic, that some of that [stress] comes from the fact that parents have taught their kids to question everything and negotiate everything at school,” Calarco says. Now that parents are the teachers, “that’s all coming back on them.”

Negotiations that used to be scattered throughout a varied day now seem like one long endless string of requests. “That endless feeling, I think that’s what brings the exhaustion,” says Kurtzberg, an expert in negotiation and a professor at Rutgers Business School, Newark and New Brunswick. “It’s the repetition that comes at us from the kid’s side,” which is something she says parents will feel more than their kids, who move on quickly.

How Did We Get Here

Intrafamily negotiation, while certainly not new, has markedly increased over the past generation of families, says Sonia Livingstone, a professor of social psychology at the London School of Economics and Political Science. She also wrote, with Alicia Blum-Ross, Parenting for a Digital Future: How Hopes and Fears About Technology Shape Children’s Lives.

There’s been a growing acknowledgment that children have rights that should be respected, Livingstone says. In today’s “democratic family,” rules are expected to be more cooperatively worked out among members. New digital technologies — which were not present when today’s parents were children — have increased the amount of terrain to negotiate over while the expectation of negotiation has broadened.

“It’s a challenge, but I think we’re told rightly, that your child also has a voice,” Livingstone says. “You are the parent who is tasked with negotiating with an irascible toddler, or a truculent teenager.”

Negotiations that used to be scattered throughout a varied day now seem like one long endless string of requests.

These expectations are a sea change from the ones this generation of parents experienced as children. Some parents told Livingstone that they were actively rejecting the more “authoritarian” styles of their own parents. They wanted to avoid the yelling, spanking, and my-way-or-the-highway attitude. But the “authoritative” model, which balances rules and warmth, requires a huge amount of cognitive work. “Balancing is like standing on a log — it’s actually very hard to do for very long. You wobble and you’re constantly adjusting,” Livingstone says.

Modeling and teaching negotiation — a skill many parents think is valuable, says Kurtzberg — is a more difficult fit during the pandemic. Family life under lockdown has morphed into a perverse form of game theory hell: Endless rounds of negotiation, with few good options, and nobody can leave.

In other words, cue the guilt. So what can we do about it?

Remember, This Is Temporary

Stella described a conflict between his ideas of being a “good parent” — someone who makes sure his kids try vegetables and don’t spend too much time on screens — and what is realistic during the pandemic. “They’re home all the time; I just want them to be happy,” Stella says. Sometimes, that means more time on a tablet than he’d prefer.

While the pandemic has ground on, negotiations have increased in some areas and retreated in others, Kurtzberg explained. She noted how many parents, like Stella, essentially gave up on regulating their children’s screen time.

“You get to a point where you’re like, ‘Well, what else are they supposed to do?” says Kurtzberg. “There’s only so many times you can have the battle.”

Easing rules during the pandemic solves a short-term problem but can come with a psychological cost, says Calarco. Parents feel guilty for jettisoning screen time limits, she says, “but also realize that that’s the only way that they can work from home, while also providing care for their kids.”

Find Solutions Together (i.e. Make It Their Problem, Too)

While negotiations are unavoidable, the stress around them can be ameliorated. Kurtzberg encourages parents to think of themselves as creatively solving problems with their kids, rather than as constantly capitulating. It’s not a headspace that you can stay in 100% of the time, but it’s a perspective worth promoting, she says. Choosing your battles wisely, and trying to let go of the meta-argument parents have with themselves while negotiating with their kids, can also vent some pressure from a situation.

Parenting decisions always entail a balance between short- and long-term thinking, Kurtzberg says. There’s a concern that any decision will create a precedent that has to be maintained. What’s different right now, she says, is that the pandemic is a kind of universal exception from normal life. The regular rules don’t apply, but eventually, they will again.

If nothing else, try to make sure you have snacks handy.

“Everything is worse if one or both of you is hungry or tired,” Kurtzberg says.