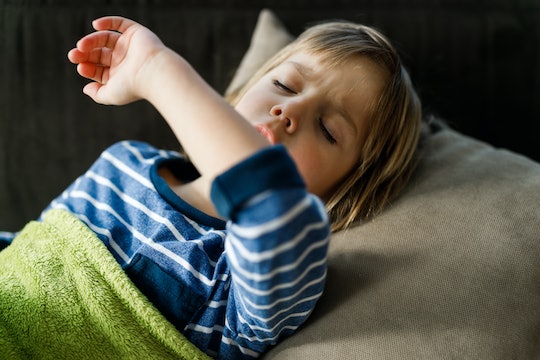 And when it’s time to see a doctor.

If you’ve ever had a sick kid, you know that coughing is one of those things that lingers (sometimes for weeks on end), leaving kids uncomfortable and parents wondering — well — just how to stop a constant cough in a child.

The answer, according to most pediatricians, is a bit more complicated because, as Dr. Michael D. Patrick, Jr., M.D., an emergency medicine physician at Nationwide Children’s Hospital and host of the hospital’s podcast PediaCast explains, “a cough has a job to do; it is an important part of our body's response to infection and to keeping things out of our lungs or bringing things up and expelling things out of our lungs.” For the most part, and generally speaking? “We don't want to get rid of coughs; coughs actually help us get better or prevent things from getting worse.” (A cough, for instance, can keep a cold from turning into pneumonia by keeping that bacteria out of the lungs, he says).

That said, coughs can be bothersome. “Upper respiratory drainage down the back of the throat can cause a tickle that keeps a child coughing and makes it so that they can't rest,” says Dr. Colleen Kraft, M.D., an attending physician at Children’s Hospital Los Angeles.

But docs say it’s time to switch our thinking about coughs in kids away from “how to stop a constant cough in a child” toward “how can I figure out what may be going on — and help keep my child comfortable?”

To answer this, we touched base with three pediatricians at top children’s hospitals around the country.

Determining the type of cough and causes

Coughs come in many different shapes and sizes. There are dry coughs, wet coughs, wheezing coughs, and other types of coughs. But Dr. Katie Lockwood, M.D., an attending physician at Children’s Hospital of Philadelphia Primary Care, Flourtown, notes that you can’t always put too much stock in a “type” of cough, since coughs can change (from, say, dry to wet or wet to dry) over the course of an illness — and aren't always indicative of severity or even what could be causing the cough. That said, here are some common cough types to know about:

Treating a persistent cough with medication

A general rule of thumb: “In kids, we don't recommend cough and cold medicines,” says Patrick. That’s because — again, generally speaking — the idea is that a cough will help mucus to trap the virus, keeping bacteria from areas like the lungs.

“So, in general, we try not to suppress the cough, because we want the body to do what it's supposed to do,” adds Lockwood. “And keeping that mucus down in the airway is potentially a risk factor for things like pneumonia.”

Typically, over-the-counter (OTC) cough meds are also “not safe for children under the age of 4,” she says. (You’ll find warnings on the labels.) The Food and Drug Administration (FDA) does not recommend OTC medicines for cough and cold symptoms in children under 2 as they could “cause serious and potentially life-threatening side effects.” The group also notes that they are “not aware” of “any proven benefits” of homeopathic cough and cold medicine for children under 4. The Center for Disease Control and Prevention’s advice echoes that of many experts, that children under 4 should not be given cough or cold medicine unless specifically advised by a doctor.

That said, sometimes your child needs medication. Sometimes, steroid medications are prescribed to help with a cough associated with croup, adds Patrick. And if your child has pertussis, they may need an antibiotic to treat the underlying infection.

So, all in all, generally speaking, skip OTC cough suppressants for kids but know that sometimes, especially in the cases of particular coughs or more serious issues, medications are required — so it’s always a good idea to touch base with your pediatrician if you have questions.

While wondering how to stop a constant cough in a child isn’t always the right approach, often, home remedies to treat a child’s persistent cough can help your child feel better and more comfortable. Here are some that physicians prescribe to their patients:

How do I get my child to stop coughing at night?

Feel like your child’s cough gets worse at night? That makes sense. “A lot of coughs happen from post nasal drip,” says Lockwood. “While lying down, mucus can run back down the throat, which can sometimes lead to coughing.”

Being aggressive about home remedies in the evening (like a cool mist humidifier and honey for children over 12 months) “sets you up for the best possible scenario before bed,” says Lockwood.

“There's actually some research to show that honey works better than cough syrup to reduce some nighttime coughing,” says Kraft.

If your child has been coughing for a while and changes at home don’t seem to be doing the trick, pediatricians suggest keeping the below pointers in mind:

Know how long coughs last. It’s normal for coughs to linger even after a virus runs its course — sometimes two weeks after a virus, says Patrick. “It just takes a little time for the body's inflammatory system to calm back down after a cold.”

Know when to bring your child to their doctor. “The best way to tell what's causing a cough is listening to the chest and listening to a child breathe, so it's going to be important to see your doctor and get a kid's chest listened to if they have a persistent cough,” says Patrick. Signs that warrant a doctor visit:

Ultimately, wanting to stop a constant cough in a child makes sense. But doctors are quick to remind parents that often, coughs are productive — the body’s natural way of clearing away excess mucus and even stopping a more mild issue from becoming a more serious one. There are always exceptions, and it’s good to know when a cough might signal a necessary trip to the pediatrician. Trusting your instincts as a parent, knowing that coughs can linger, and understanding why a cough exists in the first place can all help you help your child feel their best.

More Like This
A Parent’s Guide To Stomach Pain In Kids
Do Parents Really Need To Worry About Their Gas Stoves? Pediatricians Explain
Viral Hives In Children: What Doctors Want You To Know
Amoxicillin Rash: Is It Really An Allergy? Doctors Explain
What Parents Are Talking About — Delivered Straight To Your Inbox