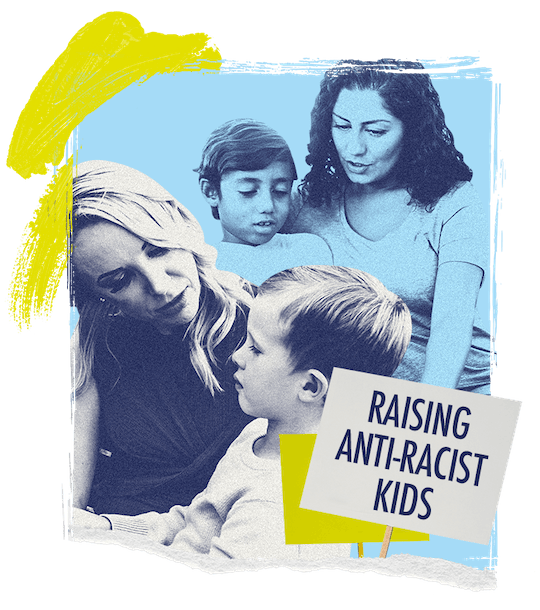 If Your Kids Aren't Black, Here's How To Talk To Them About The N-Word

Make sure you’re not raising the next Joe Rogan.

As videos of Joe Rogan’s repeated use of the N-word circulated the internet recently, a few things became glaringly obvious to me. His repeated use of this racial slur that causes deep pain to Black communities showed a comfort level with using the word in public settings and, no doubt, in private ones. Even though Rogan published an apology, if not for such a public call-out, his usage of the word probably would have continued. But more importantly, I’m a mom to two small kids and my real concern is our little ones who, while they may not all grow up to be future podcasters, may certainly be future Instagrammers, TikTokkers, and social media users. It’s clear that we have work to do when it comes to teaching every non-Black child the significance of that slur so that they know, from young, that there is no situation, no circumstance, where its use is acceptable.

Spotify dodged responsibility for giving a platform to racism while my fellow Black parents and caregivers have to explain, yet again, to our children how racism is rewarded handsomely within powerful systems in this country. As a Black parent, it’s offensive and hurtful when any non-Black person says the N-word, no matter the context. Parents of non-Black kids, especially white ones, must have conversations with their non-Black kids about the N-word to ensure they’re not raising the next Joe Rogan. Because if you’re not centering anti-racism in your family, you’re choosing to center complicity and racism.

This is the only choice if we are building a world free of racism, bigotry, and hate; one grounded in justice and equity. And it starts with the conversations we all have with our kids.

The painful history of the racial slur is intrinsically linked to Blackness. Because of this, I find it offensive when non-Black people of color, though holding differing levels of privilege and marginalizations compared to white people, use the word, as was seen with Gina Rodriguez. Though it’s widely used in Black music, non-Black fans should still not feel at liberty to use the word.

It’s clear that the willful use of the N-word is a choice for some people who are willing to disregard its intent to demean and denigrate Black people. Parents and caregivers, however, can choose to raise children who know the power of the word and understand their role in doing no harm to Black communities. This is the only choice if we are building a world free of racism, bigotry, and hate; one grounded in justice and equity. And it starts with the conversations we all have with our kids.

If your kids are not Black, I can sum up all my advice for how to talk to them about the N-word in five words.

A key part of anti-racist parenting, though, is encouraging dialogue. So as you give this straightforward advice, you’ve got to be prepared for questions. Questions are good! Here are some pointers to support you as you maneuver this conversation. Before you start, it’s important to be clear that, even during this conversation, it is still absolutely not OK to use the N-word. Our pain is not a learning point for a white-centered culture.

Do your own research.

Start off by doing research about the origins of the N-word, how it has been reclaimed in some African American cultures (and not in others) and how this word has been used to marginalize, denigrate, and degrade Black people over time. Understand its roots in slavery. You’ll also need to understand why Black people alone can determine if the reclamation of the word is within our comfort zone, and why it’s problematic for white people to continuously ask why they can’t say it.

Explain to your children why Black kids may use it but they can’t.

As we seek to build mulitracial, anti-racist spaces, our cultures and communities become more intertwined. However, truly multiracial spaces mean that Black parents and Black kids can decide if and when to use the N-word, while non-Black people need to steer clear. Understanding how this word has become a greeting grounded in Black siblinghood and solidarity while maintaining a dreadful history is key. White people and children, because of a history rooted in slavery and racism, cannot ever undo the impact of this word when it comes out of a white body. It’s never OK to use it. Not in singing or rapping along to a song. Not when quoting. Not when using it for historical reference. Not when reading aloud from a book at school. Not when repeating a friend or teacher. Not when replying to a friend who has used the N-word to refer to you. Never.

It is a word that belongs to Black people.

It’s OK to be firm and absolutist.

Parenting is often about compromise and finding space in the gray areas that make the most sense for everyone. This isn’t one of those times. It’s OK to draw a clear line in the sand and be very explicit that this racial slur is never to be used by your non-Black child. It’s OK to be firm and be crystal clear with them that there is no middle ground. Explain to them that “some words are deeply hurtful to others and should never be used. The N-word is one of them.” If kids learn the history and impact of the word from when they are young, when they hear it as they get older, they are more likely to already know that its use is absolutely not OK.

Keep the door open for questions.

Even after this conversation, your child may hear the word in a song or from a friend or even a teacher and be confused. Be sure that they know they can come to you with questions. As they get older, their understanding of it will change and they will need a space to learn more. Your relationship with your child is the foundation for any lesson you’re seeking to teach them. And when they come to you, it’s also OK to say, “I don’t have an answer for that question. Can I come back to you when I’ve done some research/thinking?”

Remember that, while following the lead of Black people is important, it’s not the responsibility of the Black people around you to educate you or your child about racism. A core part of anti-racist parenting and raising anti-racist children is continuously learning for yourself. A commitment to not committing racialized harm should be a core part of your parenting practice and that includes teaching about the N-word.

More Like This
Yes, Your Young Children Belong At Abortion Rallies
Why I'm Talking To My Teenage Son About Abortion — And Vasectomies
Advice For Rihanna On Having A Baby In This Country, From One Black Mom To Another
Explaining My Terrible Tattoo To My Kids Reminds Me Of What I Owe My Mom