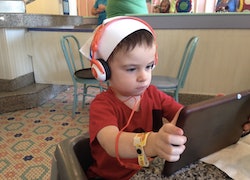 I Gave My Toddlers Unlimited Screen Time, & Here's What Happened

I fully admit to being addicted to my phone and iPad, and my twin almost-3 year olds are following quickly in my footsteps. The American Academy of Pediatrics recommends children be limited to no more than two hours of media per day, and that shows children watch be both age appropriate and high-quality educational programing, like PBS kids. I’ve been diligently doling out screen time up up until now, but my boys are already getting good at trying to use hugs and kisses to bargain for an extra episode or asking for my phone when we’re waiting in line at the checkout. My boys are so well-behaved when they're zoned into the screen, but all that face time had me worried: are my toddlers watching too much TV?

As an '80s baby, I have fond memories of watching cartoons all day long. I can clearly remember the morning Nickelodeon debuted and I spent every Saturday morning firmly planted in front of the screen watching my favorite shows. I may not remember the names of all the state capitols, but I can still sing the theme from DuckTales (woo-hoo!). Sometimes I feel a little strange depriving my kids that same rite of childhood that I so thoroughly enjoyed. The AAP recommendation for screen time says no more more than two hours of educational TV, but it always feels like a fight with my kids when it's time to turn off their favorite show and turn them on to something else. That's when this genius idea came into play: What if I gave the boys what they wanted: non-stop screen time?

Those of who grew up watching a ton of television have turned out OK, so I figured, where's the harm in letting my sons watch a little extra TV? They're over two years old so I wasn't concerned that too much screen time would put them at risk, and to be honest, I wanted a break from the nonstop whining that accompanies life with twin threenager boys. So I decided to let them have as much screen time as they wanted for three days.

The purpose of this experiment wasn't to put my sons at risk or even to be a "lazy" parent. I was just legitimately curious to see whether or not giving them exactly what they wanted would actually have the reverse effect. Maybe if TV was "free" for them, they wouldn't want to watch it? Would they be more behaved?

I handed over the remote, and here's what happened.

My early morning routine consists of being awoken at dawn by two grinning toddlers demanding milk. I dash around the room, throwing on a mostly clean pair of yoga pants, splashing some water on my face, and brushing my teeth while I try to keep the kids and cat from unraveling the toilet paper. (A battle I usually lose, BTW.) This morning, when the troops showed up at my bedside, I turned on Elmo and went into the bathroom by myself. That’s right, for the first time in almost two years, I peed without an audience. I had time to actually wash my face with cleanser, slap on a bra, and do a messy bun before the kids were ready for breakfast. And it felt good!

Mealtime is normally hectic, with lots of whining (me asking them them to eat something, them wanting me to feed them, hold them in my lap or produce cupcakes). But since the boys were showing no signs of wanting to put the iPads down, breakfast was uncommonly quiet. They ate their oatmeal without complaint, and my partner and I had some time to talk to each other without screaming to be heard, which was a lovely change of pace from the usually chaos we endure.

The entire day passed by in a series of different Disney movies and shows the kids wanted to watch on the iPad. Turns out Siri makes an excellent au pair.

It was nice to feel like I wasn’t constantly trying to come up with something new to entertain them, and I loved not having to play referee. With their attentions focused on a screen, they weren’t interested in fighting with each other over the same toy or who got a seat on my lap. In fact, they barely touched their toys at all. I took the opportunity to organize the puzzles, vacuumed, mopped, cleaned the kitchen, and did some laundry. It was amazing how much I was able to get done around the house when they were distracted by the television. By the end of day one I couldn’t image ever going back to limiting screen time.

Day Two: Maybe I Should Get A New Hobby

Today was more of the same, except that I had time to throw on some lip gloss and make the beds in the morning. Huzzah! I finally scheduled that doctor appointment I’ve been pushing off because I don’t want to have a conversation with the receptionist that's interrupted by screaming. I even plucked my eyebrows and did some crunches with my newfound freedom. But by early afternoon, I was bored.

My butt was sore from sitting down for most of the day and I felt sluggish and cranky. I tried to tempt the kids away from the screen with books and their train set, but they couldn’t have been more uninterested. Finally, after nap, I struck a compromise by putting the Muppets movie in the DVD player and snuggling with them on the couch. I figured if they were going to watch television all day long, at least I could feel like I was doing something with them.

On day two, I noticed both of my boys had a harder time settling down after bath time, and actually getting them to fall asleep took twice as long as it normally does. Since they usually watch part of a movie after dinner, I didn't really think it was because they were watching too much TV right before bed, but I did think that they had too much pent up, unused energy from the first two days. Instead of setting somewhat easily into bed, they ran laps around their room, flinging their Mickey Mouse stuffed animal every which direction they could.

It was a long night.

Day Three: Who Are You, And What Have You Done To My Children?

I woke up expecting to hear the typical sounds of my kids racing down the hall towards my room screaming, “My mommy first!” before they pounce on me and snuggle up under the covers for a few minutes. This morning I heard the toddler charge start as usual, but they weren’t bickering over seeing me, they were having a heated discussion over whether to watch Elmo or Mickey Mouse Clubhouse. It was hilarious but also devastating, because as much as they do not understand personal space, I'm well aware that they'll come a day when my boys do not want to crawl into bed with me. Knowing that they'd rather watch TV than come after me was a little hard to swallow.

But I had errands to run, so moping around about the boys would have to wait. Trying to do a week’s worth of grocery shopping can be hard with the twins constantly trying to touch every display we pass, but with the phone to keep them occupied, it felt like I was shopping alone. I took them for a run in the stroller, and while I can sometimes spend the last mile of a 5k pleading with them to sit down for just little while longer, I managed a full five miles before they looked up from Monsters, Inc. It was great to sneak in a long workout, but I had this nagging feeling of missing my kids, even though I was with them the entire time.

My partner and I figured the final night of this experiment was the perfect excuse to have a meal out. We headed to a family restaurant, iPads and headphones in tow, and sure enough, the meal was quiet and nice. I enjoyed eating while my food was hot and I loved not having to worry about my crying child interrupting others diners' meals, but I didn’t like how my boys barely seemed to notice that we were out of the house.

Part of the reason why I take my kids out to eat and with me on errands is to improve their social skills. Utilizing the iPad to stop a mid-meal meltdown is one thing, but allowing them to watch a show for the entire meal means they’re not learning anything about how to wait patiently, how to interact with strangers, or how to make dinner conversation. It didn’t feel like we went out to eat as a family, and frankly, I was thrilled this experiment was over.

Is A Tablet The Perfect Low-Cost Babysitter?

Look, I’m never going to judge another parent for handing their phone to their child or letting their kid watch television. It's not my thing. Parenting is a constant job, and sometimes it's mom and dad who need a time out. But after this experiment, my feelings on how we'll tackle screen time have forever changed.

I won’t allow my kids unlimited screen time going forward, because at this age, they’re still too young to understand moderation, and they still need an adult to help direct them towards activities that will help improve important social and educational skills. After three days of unlimited screen time, my guys had exuded very little physical activity, and I could see just how easily that could effect their cardiovascular health in the long run.

My kids’ social and language skills didn’t seem to suffer, but I definitely noticed they were talking less and not interacting as much with me or each other. If I continued to allow them to watch so much television over time, I worry that they'd lose their growing vocabulary or stop wanting to learn new things altogether.

I’ll be sure to give my kids plenty of time to play with things other than iPads, but I’m not going to be quite as rigid about holding them to the two-hours-per-day rule. Because parenting is about doing what’s right for your kids and for your family on any given day, I think the boys will be OK if they get an hour more or an hour less of TV, depending on the day. If it’s a rainy and wet out or if I’m not feeling well, I’m not going to feel bad for letting the DVD player do some pinch-hit parenting.