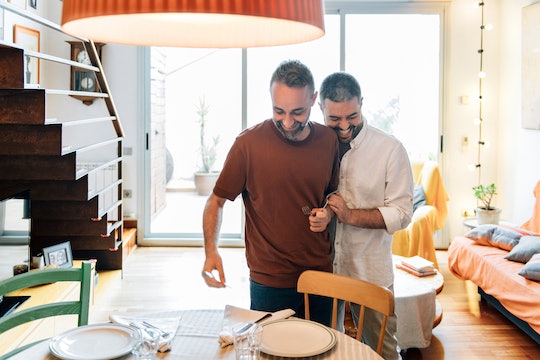 In Two-Father Families, Who Gets To Be Called Dad?

The same questions gets asked on Gay Dad Private Facebook over and over and over: What do your kids call you?

The posts all start off like this one from Jake (not his real name) in Georgia: “My husband and I are at a standstill about what names our kids should call us. When our kids were first born, we both wanted to be called ‘Daddy.’ Neither of us like the other options.”

I try to peck out quick answers to these new dads on my phone. I explain that my son Luke calls me Dad and my husband is Dada. My take quickly gets too complicated, too tender for social media. Truth is: I feel both honored and a bit guilty to be called Dad. For me, the name feels like bringing home the bacon and bring me my slippers, the gold-standard, the pater familias, the World’s #1 Dad coffee mug on Father’s Day. I also associate "Dad" with being distant, and even more, dangerous. When our son was an infant, I worried that some people would think that I won something by getting the title, or even that the name implies that I’m genetically related to our son.

We gay dads have pulled through struggles and self-reckonings to plant ourselves in parenting and should have the kinship names we want.

Some men say they will both be called “Dad.” My heart loves this solution even as I wonder how practical it is. We gay dads have pulled through struggles and self-reckonings to plant ourselves in parenting and should have the kinship names we want. I say wrap all of us up in World’s Best Dad barbecue aprons and line up all the #1 Dad coffee mugs from the school store! We did it and the name is within our grasp.

Papa and Dad is probably the most common set of names for a duo of dads. This just makes sense. The names sound different from each other and are classically used names that most people will already recognize. Linguists say papa or baba are some simplest sounds for babbling babies to form.

Some gay dads say they will encourage their kids to use their first names. Others, I imagine them to be the most relaxed of the bunch, want to wait and see what name the kids start using organically. A two-dad family I found on Facebook said their son started calling them Big Daddy and Tiny Daddy.

Naming ourselves for our kids is a restorative and creative act.

Choosing a name for someone else to call us is a powerful initiation for queer parents. For most of our lives we LGBTQ+ people have been called three and four letter words that we cannot control. I feel myself finally healing from my junior high school tormentor Keith tripping me down the Up Only staircase while shouting “fag” and “homo.” At 12 years old, I was especially afraid because I didn’t know what those taunts meant, or maybe because I did. Naming ourselves for our kids is a restorative and creative act.

Practically speaking, it is useful for Luke to have different kinship names for each of his fathers. We want to know who he’s calling for. When he wakes up in the middle of the night with a bad dream or a wet bed, he wants his Dada. Card games, school drop-off, and long conversations about venus fly traps have become this Dad’s domain. The English major in me worried that our decision to be called Dad and Dada might confuse our son. This never happened. Our son seems to always understand that we are both his dads, even if I’m the dad called “Dad” at home.

Our babysitter and my mom sometimes mix up their Dads with their Dadas. Neighbors and friends don’t always get it right either. I never correct them — quibbling over a word feels impolite. Though before I can worry I’m missing out on an opportunity to stand up for my family and our preferred names, my son, at 5 years old, always jumps in to explain: “THIS is my Dad and THIS is my Dada!”

Our son discovering the word “Dada” can be seen as a “small developmental miracle, a child is being born as a separate, unique being,” according to Dr. Deborah MacNamara.

Our modern family name game hasn’t always been so solid. At 3 years old, our son started calling me “My Other Grownup.” At first, I was impressed he made his own name for me. The “My” felt like his way to claim me, a verbal version of holding my hand. It reminded me of the online attachment parenting class where we were required to take parenting as part of our adoption preparation process. He was naming and claiming me. I was cool with the “Grownup” part too. It felt good to think my son saw me as an adult provider he could count on. It was the “Other” of My Other Grownup that ached as he continued to use that name for me. It felt like my son noticed that I didn’t get as much new parent leave as my husband and didn’t get to spend as much time with him. Even as I learned that it is natural for toddlers to prefer one parent, I struggled with being named the odd man out.

As my husband and I started thinking about how we’d celebrate Father’s Day this year, I asked him how we landed on kinship names we use. I’d thought that my husband and I chose the names our son calls us. I thought we directed Luke to calling Dada and Dad. This left me worrying that I hogged the Dad name and left my husband with something less, but my husband, ever generous, said it happened much more naturally than all that.

Then we did some Googling and learned that some doctors say that “dada” is the very first being our baby saw beyond himself. Dada is likely the very first word formed in our infant son’s soft mouth. Our son discovering the word “Dada” can be seen as a “small developmental miracle, a child is being born as a separate, unique being,” according to Dr. Deborah MacNamara. Luke tumbled into the living room in the middle of all this. As Luke snaked across the living room couch, I asked Luke what the word “we” meant. He wasn’t sure at first. Then I asked him what “me” means and he started pointing at himself right away.

“Are you sure you don’t know what we means?” I asked.

“I think ‘we’ means we are a family. Dada and daddy and Luke,” he said.

I want to tell those Dads and Pappas, Paters and Pops on Facebook that choosing the names our daughters and sons will call us gives us power, and faces our families forward. I want to tell these fathers that no matter which names they choose, the best name is the word my 5 year old is just starting to understand: we.