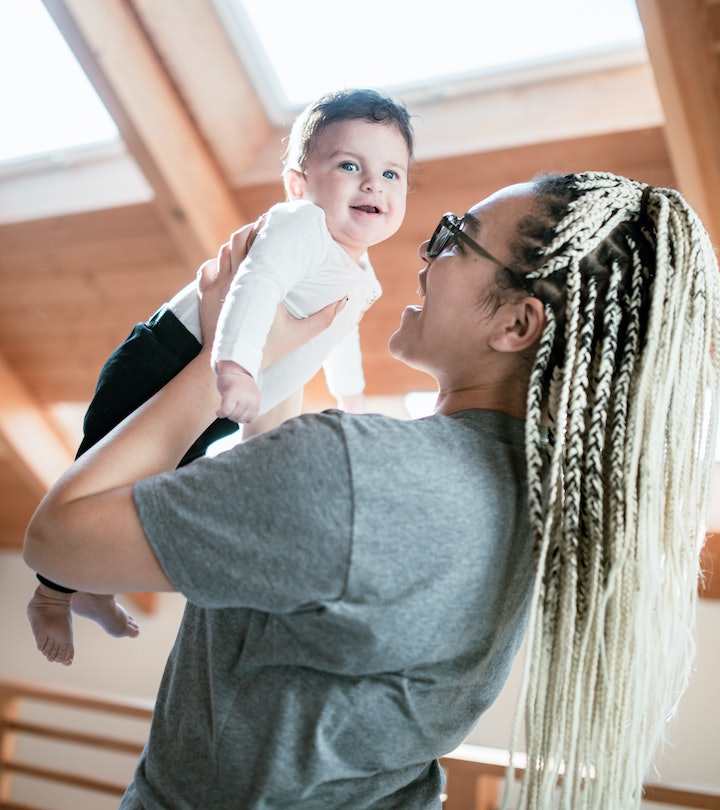 No matter what, experts say you don’t need to panic.

My son is a perpetual motion machine and always has been. We joke that he has to "get his wiggles out," when he's having a particularly jumpy day. But when he was a few years old, he was diagnosed with autism spectrum disorder. His "stims" were one of the red flags the pediatric psychologist used to diagnose him. However, not every motion an excited child makes is a stim, and it's important to know the difference between self-regulatory stimulations and just the plain old excitement of babies.

“The word ‘stimming’ came from the context of self-stimulating behaviors,” psychologist Bonnie Ivers tells Romper. “These behaviors usually involve repetitive movements and sounds.” Think of hand-flapping, rocking back and forth, clicking the tongue, or even biting nails. They can all be stimming behaviors in the right context. She adds that while it might look a little strange to us as adults, “Infants and toddlers engage in many of these actions during early development as the brain and body are growing.” How many of us have watched our babies happily babble the same sound over and over, or rock back and forth in their high chairs? It’s all very normal, and expected in their development.

When To Be Concerned With Your Baby Stimming

Not for a while. Ivers says, “In the course of early childhood, as the brain develops and motor, cognitive, speech, and social-emotional skills are emerging, self-stimulatory behavior typically decreases.” If it continues, or if you’re concerned, she suggests talking it over with your pediatrician.

Psychologist Dr. Lea Lis says that stimming on its own is not abnormal either. Think about how you tap your foot when you’re nervous, or bite on the end of a pen. We all have some behavior that we rely on to chill our bodies when our brains are going a million miles per minute. Instead, Lis says that it becomes worrisome when it’s a part of a “constellation of symptoms.” She tells Romper that if it is seen in conjunction with other red flags such as “things like poor eye contact, toe walking, hand-flapping in the context of other things” it could indicate a problem. You should also keep an eye out on extreme stranger danger or if your kid is “slow to warm up to new people” on top of stim behaviors, and things like lack of social smiling, pointing, waving. All of that together, as a part of a pattern, is when you should start to consider evaluation.

She specifically talks about kids not understanding what we think they should see as funny, and for my son, this was a big one. Peekaboo for him wasn’t a fun game where he learned object permanence — for him, it was a nightmare. He’d scream and cry over the idea. The same can be said of blowing raspberries on his belly. He hated it, and would aggressively push you away if you tried. Lis says this can be a sign for other parents. Look for “problems transitioning from playing to eating, or playing to diaper changes associated with tantrums,” as well as a speech delay. If you notice that your child fits a number of these, talk to your pediatrician about potential evaluation and early intervention. Otherwise, if they’re just bouncy and spinny babies, Lis notes it’s just their development.

I can tell you from experience — once you put the pieces together, it’s not as hard to detect as you would think. Because my neurotypical daughter may be a nail biter that likes to bounce on the tips of her toes while she plays Minecraft (and honestly, she has never liked strangers), but she didn’t fit the rubric for autism in any other area, and it was pretty clear she was neurotypical. My son pretty much ticked off every box that Dr. Lis mentioned. In the end, if your gut is telling you something is up, listen to it, and talk to someone. Even if it’s just to get peace of mind.

More Like This
Should You Swaddle Your Baby In The Summer? Here’s How To Dress Them
Can You Get The Covid Vaccine For Kids Under 5 At CVS?
Should Parents Consider Delaying Covid Vaccines Until Closer To School Starting?
How To Breastfeed A Baby With A Cleft Lip Or Cleft Palate

This article was originally published on June 8, 2018