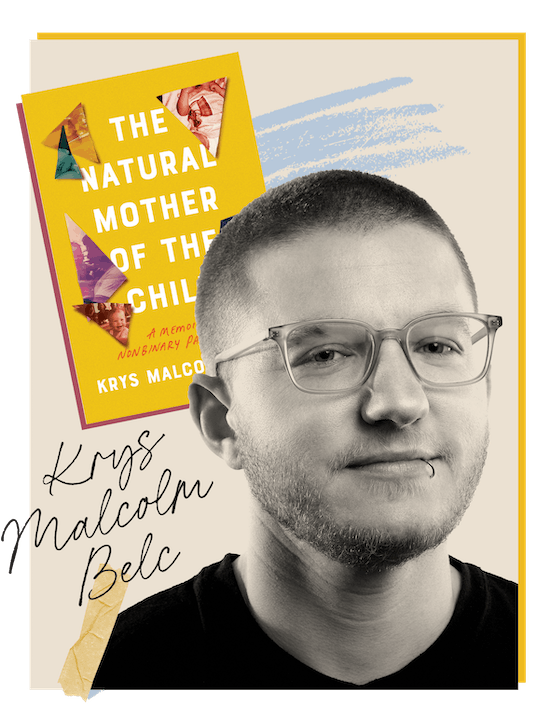 “If I were to elevator pitch the book, I'm like, It's about how I, as a dude, had a baby.” But I'm not here to teach people about any of these topics.”

No one asks to be born, and few know this better than Krys Malcom Belc, who is the parent of three young children. “It's hard not to look at your kids and be like, did I cause all of the hard things you're going through? I didn't create the world, but I chose, without their participation or consent, to bring them into this,” he said in a recent phone interview. “Any act of family creation is in itself a selfish thing.”

And yet, knowing that, Belc decided to get pregnant anyway. The experience of carrying a baby and giving birth as a transmasculine nonbinary person in a queer relationship is the subject of his debut, The Natural Mother of the Child: A Memoir of Nonbinary Parenthood. The book finds Belc asking himself, as he put it recently, “What is it that I was hoping to get out of this? What is the thing that I was searching for when I decided to do this?”

Ultimately, Belc doesn’t find or give any easy answers, but the record of his search has its own eloquence and resonance. The Natural Mother of the Child is an intimate look at the myriad ways it is possible to create, maintain and live in a family, as well as a body, and the structures — legal as well as personal — that we rely on to make the world livable for and legible to ourselves and one another. Romper spoke to Belc on the phone while he was at home in Philadelphia, a week before the book’s publication.

The book is a memoir, but it’s also a collage, filled with photographs and legal documents that you’ve annotated in various ways. Why did that approach appeal to you?

My parents have always been married, and they're still together, but I grew up in a family where we had cousins who are not real cousins. You have people in your family that it's like, I don't know what their legal status is in our family, but that's not that important. But on the flip side of that it's like, my aunt's been raising this child for how many years? She must have enrolled him in school.

I'm interested in the fireproof safe full of nonsense that we have to lug back and forth that has our car titles, and medical information, and this treasure trove of adoption paperwork and redacted birth certificates that were re-issued with different people on them. It's an interesting thing to look at as a thing that a lot of families have: detritus of the legal system that they have to bring with them.

Writing about the people in your life is always tricky, and even more so when you’re writing about your kids. How did you think about that part of the book?

It’s not a biography of Samson. He's in there, and it's about this event, but I'm not trying to put a lens on how he experiences his life.

Honestly, [the rest of the kids are] mostly upset that they're not in it more. I think they're very jealous. I've been like, ‘It's about how having Samson made me think a lot of things about my gender,’ and they're like, ‘Yeah, but you have three kids, so...’

If I have a parenting philosophy, which I wouldn't say that I do, it's that different people need different things, and get different kinds of attention at different times. So we've just been like, It's not about you, but maybe in the future you can write your own memoir, or I can write another book about you, or we can write a book together. There's a creative future.

One of the things that I love about the book is that you allow yourself to be honest about the dark sides of things we typically don't like to admit are difficult — things like your own childhood, and also being a parent, and also being trans. There's a tendency to want to write the trans narrative in particular as, I was born this way but I went through transition and It Gets Better, but you allow yourself a lot more subtlety and nuance than that.

The decision to engage with medical transition, and to ask my kids to call me one thing instead of the other thing, ask people to use other pronouns — that was a very active decision that I did not need to sustain and prolong my life. I wasn't in any peril; it wasn't an obvious choice for me. So that subverts something that has come out in trans literature and trans autobiography because of the picture that cis people and publishers wanted to see. I wanted to capture how I made the decision to engage in family creation despite not knowing very basic autobiographical information about myself.

There is a narrative, mostly in cis people's heads, but also in some literature that has been published by and about trans folks, that it ends at transition. Transition is a crescendo of a trans life. And I'm like, no, then there's the whole after part. I feel like I chose to do something, and it's a choice that I'm ultimately glad I made, but I can see myself on the other side as well.

I think the decision to engage in family creation in some ways is so similar to the decision to, whatever transition means for someone, to do that. There are things about [having a family] I love: I look at my kid and have a fuzzy feeling, but I also see my kid and feel apprehension and revulsion, and I miss the past and feel nostalgia, and you can have all of these feelings simultaneously.

One of the things about writing a book about parenthood is that you have to also be a parent while you do it. How did you and your wife divide up childcare while you were working on this project?

Without a partner with a steady middle-class job that she can get anywhere, I wouldn't have written the book. We've done every single work and childcare arrangement under the sun, but without her massive flexibility I just could not ever write anything.

Once I got deep into the project, we were able to finally have all of our kids in childcare. Part of that is that I got a small grant from the Sustainable Arts Foundation, and we lived in a pretty remote place where childcare wasn't particularly expensive.

I can't write with a kid near me. I can read, I can plan writing, I can do my weird Photoshop stuff. There's a lot of pre-work I can do, but I always needed to actually be alone somewhere to write.

Parts of the book are addressed to your wife in the second person — and other people, as well. How did you decide on that mode? Why did it feel right for this project?

I wanted to find a device that would help me reduce the impulse to be didactic. If I were to elevator pitch the book, I'm like, It's about how I, as a dude, had a baby. There's so many questions people have about that that are honestly truly boring to me, and they've already been answered. I'm not here to teach people about any of these topics.

So I was looking for techniques that I thought would help me decrease that desire. I was like, if I'm doing direct address, they already know all of this. That device of over-explaining will no longer be available to me, and I will have to communicate real feelings. It makes me have my most non-full-of-bullshit writing.

I want people to feel a closeness to some of the experiences I'm describing, ones they may not have imagined they would feel close to. Sometimes people pick up books and they're like, It's Trans Literature. I'm gonna learn about someone whose experiences are super outside of mine. Writing from a more close-up point of view helps eliminate that possibility for people.

There’s a line in the book where you talk about joining a college rugby team, and identify yourself as being someone who was in search of “touch and pain in [my] life in an organized way.” Pain is often associated closely with cis womanhood, and weirdly kind of prized when we talk about pregnancy — like, a natural birth is considered the apex in some ways of cis womanhood. What did considering and approaching the pain of pregnancy and birth mean for you?

I did think about it as an endurance event; I felt like that was something that fueled me to stay hopeful, to stay physically active. I wanted to have this similar birth that my wife, Anna, had had, mostly to avoid the hospital.

At the time, I was in pretty serious bodily turmoil over what kind of body I should have and how people should see it and I don't feel that way anymore. I'm chill with the way I look and am perceived.

After having a mixed experience with childbirth the first time, my partner saw having another child not only as, We always knew we wanted to have a certain number of children, but also, I will have the experience that I thought I was supposed to have the first time. I sometimes think of it similarly [for myself]. What would it be like to have a fully embodied pregnancy experience where I actually am presenting and looking the way I'm more OK with?

I'm in all of the Facebook groups that exist for transmasculine pregnant people; I probably have found them all over the years. I've been in them now for almost a decade. That community has existed for a long time — unlike what weird Twitter trolls would have you believe, that suddenly trans people are having babies. There's no right way to do it, no one thinks we should be having babies anyway, so we should advocate for the experience that we want.

The Natural Mother of the Child
Bookshop