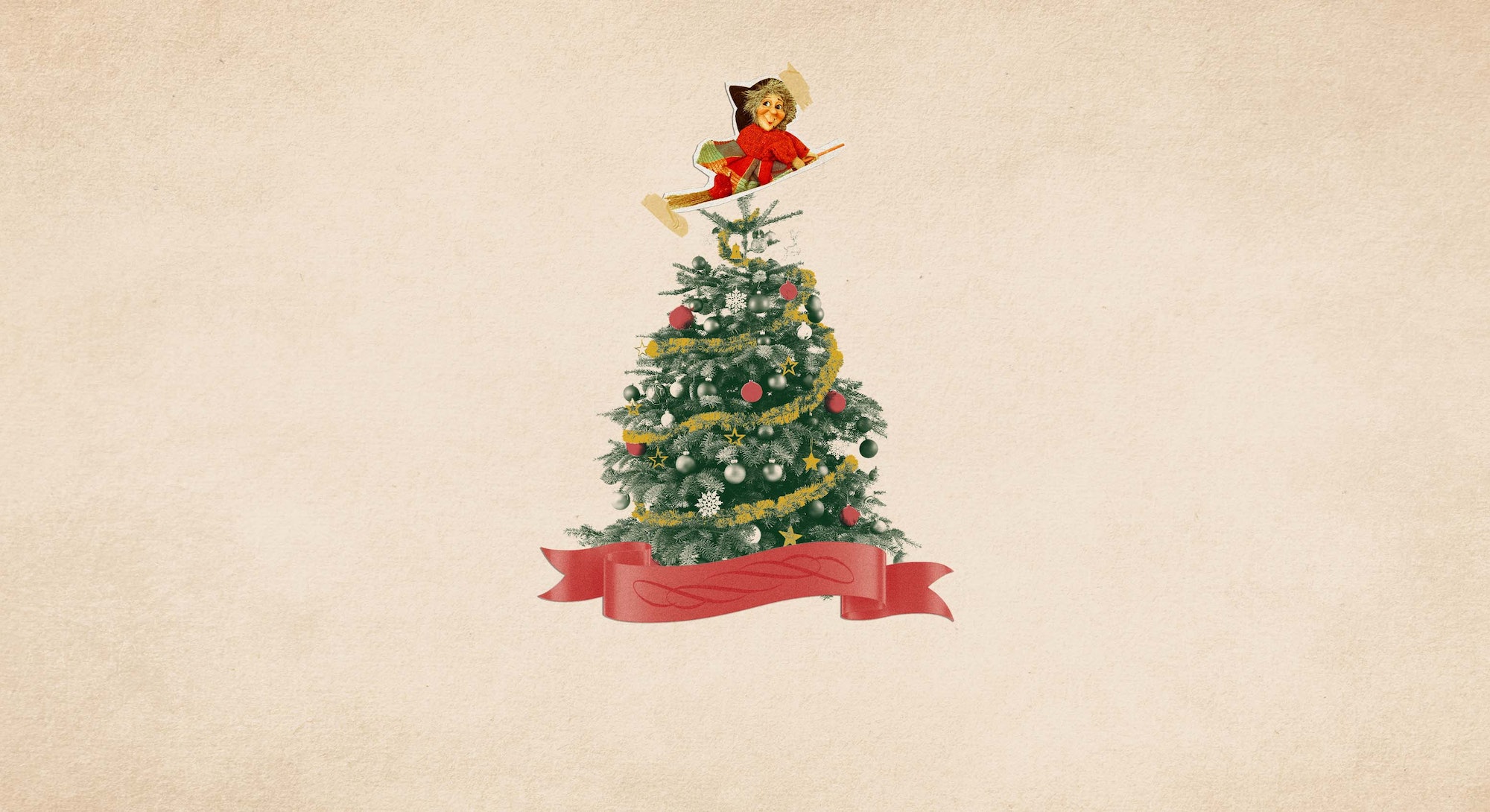 I would never ask my daughter to give up Santa for La Befana, but tell me: Why not both?

“Get her off the tree,'' my 2-year-old yelled, reacting the way she reacts to any new thing at first: by completely rejecting it. My crime was placing a small, rag-wearing witch figurine atop the Chrstimas tree instead of the usual star. I’m trying something new this year. I’m replacing Santa with an old witch named La Befana.

Replacing might be too strong a word. I’m letting the two coexist while pushing the witch as my preferred magical holiday figure. I’m sure I don’t have to list the reasons why La Befana, a poor old crone who shares her goods with children everywhere, is a superior symbol of kindness and cheer than a fully grown man who still drinks milk at night, but I’m going to anyway.

Christmas in Italy is a little like Halloween without the pumpkins and pressure to dress up. Visit a Roman market around this time and you’ll see a smattering of rag-wearing witch dolls riding tiny brooms for sale. These are effigies of La Befana, the legendary old witch who, from the watery streets of Venice (where the gondoliers actually do dress up like her) to the twinkling seas of Sicily, matches Santa in popularity.

Like all interesting women, Befana has a complicated past.

Some call La Befana the Italian Santa Claus, but she’s so much more than that. She’s at least as old as the patriarchy itself, endured an involuntary conversion to Christianity, and survived appropriation by a fascist regime. Claus might be better known, but he’s ultimately a hack. Five minutes of internet research reveal him to be a mashup of Saint Nicolas, a sixth century Greek Bishop who lived in present-day Turkey, and Father Christmas, a man the British made up and dubbed a “merry-maker,” probably to get through what we now call seasonal affective disorder. He got some traction in the 19th and early 20th centuries with Thomas Nast’s 1863 rendering, on which his current look is based, and an anonymously written poem published in 1923 that came to be known as “Twas the Night Before Christmas.” He didn’t become synonymous with Christmas, though, until his big break in 1930, when Coca-Cola made him the centerpiece of a marketing campaign so successful, most of us aren’t aware that it was one. As far as lies go, Santa is epic. Which is why I prefer the witch.

La Befana’s arrival marks the end of the 12 Days of Christmas. In the Western Christian tradition, it took 12 days after Jesus was born for the Three Wise Men to find him. When they got there, they recognized him as Christ, and that’s called the Epiphany, which falls every year on January 6. Befana flies around on her broom on January 5, the night before the Epiphany to fill children’s stockings with goodies or (candy) coal, but usually both, because she knows kids contain multitudes. Ever practical, she sometimes also gives garlic and potatoes, the beginnings of a healthy soup, and while she’s in your house, she sweeps away any bad vibes.

To prepare for her visit, Italian children put out wine and bread, because Befana is a broad, a dame, a woman who needs a drink and some carbs. There’s a rumor that if you see her, she’ll smack you with her broom, which has proven an effective way to keep kids in bed instead of searching the skies for her.

Like all interesting women, Befana has a complicated past. She’s been celebrated since neolithic times, evolving from an assortment of pagan goddesses associated with magic, renewal and abundance. Picture it: New Year’s Day, Ancient Rome. After the riotous week-long winter solstice party Saturnalia, pagans visit the temple of Strenia, heathen goddess of strength, purification, and well-being. They offer her figs, dates and honey, the same type of gifts Befana now leaves for children. These gifts were called “bastrina,” which may be where Befana got her name. (Another theory is that it comes from the Greek word for epiphany, epifania). Christianity eventually merged Saturnalia and Christmas, with the 12 days of Christmas culminating in the epiphany, but Italians clung to La Befana as their New Year’s tradition. Your girl has outlived emperors and many, many popes.

That said, she has been forced to endure a few re-brands. First her pagan roots were replaced with a PC subplot of the Christmas story, wherein the Three Wise Men approach Befana, an old hag with an immaculate house, to ask for directions to Bethlehem. They’re on their way to visit a poor, newborn king. She doesn’t know what they’re talking about and declines their offer to join them, saying she has too much housework to do. Ask anyone who’s turned down an invitation to Burning Man because they “had to work”: Befana knew better than to embark on a “spiritual journey” with three dudes she’d just met.

After the men leave, Befana wonders if that bright star she saw the night before could in fact mean a messiah was born, so she bakes all day and goes out to search for him herself, with her goodies and her broom (to sweep for Mary). Despite her broom becoming airborne, she never does find the manger, which is a shame because if I’m Mary, I would rather receive delicious home baked goods postpartum than frankincense and myrrh (I’d take the gold, fine). Befana spends the rest of eternity looking for the baby Jesus and giving out goodies along her way.

Many of the Italian versions of the story riff on this one. Beloved American children’s book author Tomie dePaola, iconic distiller of Italian legends to gli Americani, went with the three wise men version in his book The Legend of Old Befana. Better than another version that has Befana’s infant son murdered by King Herod, and Befana transformed by grief from young woman to gift-giving old hag. (Leave it to the Church to make even a Goddess’ circumstances dependent on a man.) But the retellings don’t really conceal her truth: In a country infamous for portraying women as either Madonnas or whores, Befana entirely sidesteps the sacred/profane binary. She’s single by choice and very clearly pagan, and the Italians remain utterly enchanted.

As it turned out, Italians loved La Befana more than they loved Mussolini.

Case in point: Mussolini. Il Duce decided to strengthen Italian nationalism and diminish outside influence by banning Santa Claus from Italy in 1928 and establishing January 6th as the official day of La Befana. As it turned out, Italians loved La Befana more than they loved Mussolini, and her holiday long outlasted his Fascism. When the Italian government tried to strike her day from the calendar in 1977, parents took their children out of school in protest. She was eventually given it back, proving you don’t take a holiday away from an Italian, or a witch, for that matter.

There is absolutely every reason to worship this magical Christmas witch, but I didn’t, at least until recently. My parents are Italian-Canadians, but the most I knew about Befana while growing up was that my mother hung a broom riding witch doll in our kitchen every year. When my grandparents immigrated, they were focused on assimilating. La Befana was and still is unknown to most North Americans; the most publicity she’s ever received was a recent Kinder Bueno ad. My family let Santa take over.

Still, we’d always hear from the nonnas on the Epiphany, because they remembered, even if they didn’t really celebrate. I’ve realized that my newfound love for Befana is an extension of my love for my grandmothers. I want to remember what they had to forget when they came here, to honor the parts of them they had to suppress. They never explicitly said so, but they were both streghe at heart. Both came from small towns in Italy where magic was part of daily life, not in the sense of lovely views and food and language, but real, curse-lifting, kitchen spell-casting, season-worshipping, ancestor-honoring witch shit. One knew incantations to lift the evil eye. The other had highly developed intuition and a way with medicinal herbs. They weren’t the only witches in town, either. I grew up hearing about how my mom’s uncle Osvaldo was taken by the official town witch as a baby. Someone in the family owed her money for services rendered, likely a love spell cast or curse lifted, so the witch took the baby and left her broom behind on the family’s doorstep to let them know where to find him. The debt was settled and the child returned, unharmed, and it was all a very dramatic and illegal but ultimately effective way to get an invoice paid.

The last plug I’ll put in for La Befana is that she asks way less from parents than the guy in the red coat. She supported conscious consumption way before climate change and the supply chain debacles, and she doesn’t do big presents — leave your kids a couple of candies or small toy, just enough to give everyone something to look forward to during the post-Christmas slump. There’s also food involved in celebrating La Befana, naturally. A fruity cake called “Torta di Befana” is made with one fava bean baked into it. Whoever gets the bean is Queen or King for a day and is bestowed a bit of extra luck for the year ahead.

I’m making progress with my Santa-to-Befana toddler conversion, thanks to dePaola’s book, witches being able to fly on brooms, and the promise of more presents. “What’s the name of the Italian Christmas witch?” I asked my daughter this morning as I wrangled her hair into a ponytail. “La Befana!” she said, pointing to the top of the tree, where Befana is allowed to be now, and where she has always belonged.