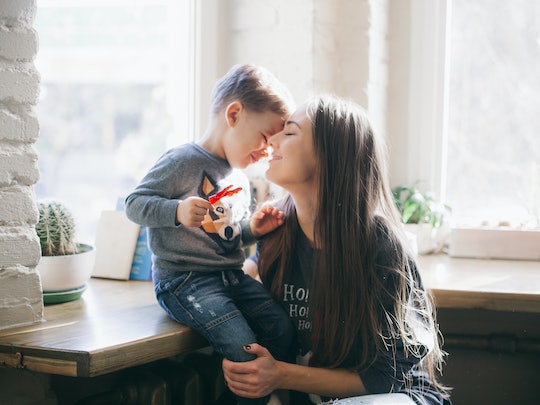 Letting Myself Learn From My Kids Made Me A Better Mom

The beautiful, unexpected lessons I've learned from my littles.

Like so many of us, I wear a lot of hats. I’m a mom of two, a daughter, a sister, and a friend. I’m a niece, a cousin, an employee, and a colleague.

But when I think about what defines me, I often think of my anxiety. It’s always there, an undercurrent buzzing in the background no matter what’s going on. It gets so bad that even my anxieties have anxieties. They have since I was sporting stone wash jeans, boy band t-shirts, and slap bracelets. “To-do” lists are my self-care and pacing is my cardio.

I always wondered how this part of me would translate into parenthood, assuming I was destined to become a textbook helicopter mom. Managing another human’s life in addition to mine? What? When? And how?

I spent the months of my first pregnancy planning and preparing. Nesting came second nature, and was an outlet for the nervous energy that came with diving head-first into a brand new life as a mother. I indulged in researching baby product reviews, watching videos of car seat installations, and packing and re-packing hospital and diaper bags (way in advance of needing them, of course).

When my son Henry arrived, it took me all of a week to realize that my best, most carefully laid plans took the backseat to this new life. There I was, with said perfectly packed diaper bag on my arm, and Henry carefully secured in his baby seat, proudly (and surprisingly) on time for his newborn photo shoot. It was our first outing as a family, and we were all clean, dressed in our pre-planned outfits, and ready.

We walked in and my eyes lit up over the array of sets, swaddles, and baby faux bearskin rugs on which to capture some of my sweet boy’s first moments. I even came prepared with examples of the photographer’s past work that I liked, and other ideas I’d seen and swooned over.

Henry was wailing as I took him out of the carrier, which made sense according to our schedule; it was time for him to eat, and this had to be his “hungry cry.” I fed him quickly and clumsily, not being used to it out in public and on-the-go. He drank and burped willingly and his crying stopped. My baby even started looking sleepy, which would be perfect for some of the photos, the photographer assured me. With a crisis successfully averted, I let myself feel proud of this new-mom win and set my sights on the photoshoot at hand.

Up first — the baby in a basket, surrounded by soft blankets. A classic! I had Henry about halfway down to set him in it when it started. The vomiting. And I mean projectile, “how-did-that-come-out-of-this-sweet-lil-baby” throw-up. It was everywhere. All over the two of us, and all over special outfit number one. All over these plush, cloud-like blankets that were not ours, as well as the entire angelic set itself.

I froze. This was not in the plan.

Covered in baby puke, being consoled by a very gracious and forgiving photographer, I had my first real lesson in motherhood. It wasn’t about tuning into my daily planner anymore. It was about tuning into my child and trusting the maternal instinct that never lets you down. And when Henry continued to have these episodes over the next couple of days, I called the pediatrician who helped identify and correct a reflux problem. No, it wasn’t in my plans, but it was the first of many re-routes in the road to come.

As he grew, so did my ability to follow his lead. Of course I was still in charge as the parent, but I had a lot to learn from him, too. I never thought that the paramount responsibility and lifetime commitment of motherhood would free me from so much anxiety — but it has.

Where I’d arrange classes, playdates, and activities to fill up a Saturday, Henry would just as soon stay in our pajamas and snuggle. Where I’d lay out well-fitting boots, raincoats, and umbrellas, Henry would ask for permission to race outside as-is and see who could make the biggest splash in the puddles. My inclination to wipe the globs of lovingly selected Crest plus Scope toothpaste from the sink immediately after we brushed, clean the spots off of the mirror, and put the stepstool back in its rightful spot took the backseat to Henry’s excitement to move onto whatever came next, knowing full well that the globs could wait.

Henry found joy in the small moments and has an inherent go-with-the-flow attitude, and thankfully, it rubbed off on me. It also translated into my relationship and parenting style with his younger brother once he came along, and continues to today.

My kids have shown me the joy in the unknown and the freedom in the carefree. It doesn’t mean I’m willing to sacrifice offering the best I can, from experiences to modern products and beyond. But it does mean thinking — and living — outside the box, letting two kind, curious, and adventuring spirits be my guides.

One day, those toothpaste globs will be gone, but I’ll keep the memories and lessons always.

More Like This
10 Ways Breastfeeding Is Good For Moms, Too
9 Reasons Why Some Women Can't Breastfeed
Which Type Of Back To School Mom Are You?
The Morning Rush Is Parenting At Its Most Essential