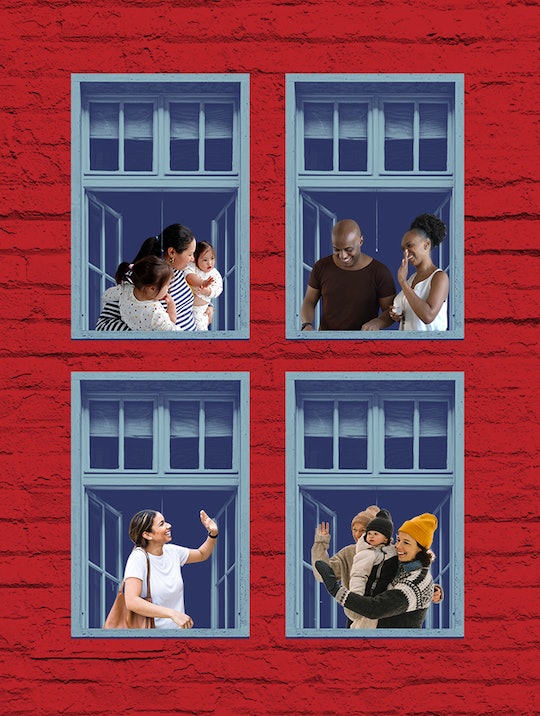 The Cohousing Community That Saved Me From Parenting Isolation

For my family, this time has most certainly been anguishing. But it has not at all been lonely.

The house I was born and raised in had, by the estimates of my four siblings and me, 54 rooms. An old Victorian just a few minutes from Harvard Square in Cambridge, Massachusetts, it wasn’t a Barbie Dreamhouse so much as a six-to-eight-unit building, depending on your definitions of separate dwelling spaces and the annual visits of the housing inspector.

My parents, who grew up in traditional single-family, suburban homes, knew that the only way they could afford to be part-time workers and raise five children was to stay in the city and rent out parts of their home to relatives, visiting families, and any graduate student who had a gentle touch and didn’t seem like an addict (a few addicts did slip by, of course; they always do). I grew up with an endless stream of new and vibrant cohabitants — like my second cousin and her single mother who played folk music and cooked us the same lentil pilaf for dinner every Tuesday night; Chris, a Harvard dropout, who took us to Celtics games and taught us how to throw a ball and ride a bike (my dad never went out for the “cult of masculinity”); and my great-aunt from Texas who was mostly gone from Alzheimer’s but covered for it with her customary Southern charm (“How lovely to see you! Now, what do people around here like to call you again?”).

Even decades later, I meet new people who tell me stories of when they lived in our house, and feel the intergenerational effects of all of that community. I tried, in the years that followed, to replicate it, with only marginal success.

Until one day our neighbor Tom, a retired teacher who had chatted with me in the driveway for years, invited us to dinner with what he called his “cohousing community.” And just like that, a year or so before the whole world’s sense of community was turned on its head, we met the people who would save us, not just from the isolation of parenting young children, but from the lonely hellscape of parenting in a pandemic.

We gathered our kids and walked about 20 steps from our back door and through Tom's gate, which I can only describe as the entrance to a secret garden. On the other side, unbeknownst to us despite our proximity, was a wide lawn, a fire pit, a small gym, a barn, an endless patch of vegetable beds and fruit trees, and five separate buildings that housed nine different households. Standing in the communal kitchen and dining room, trying not to gape, we were introduced to two other couples — Christine and Brian, with a baby just a few months younger than our daughter, and Courtney and John, with two kids just around the age of our son. Courtney’s family, it turned out, lived just across the fence from us, close enough to have heard my loud phone conversations for years, but we had never once met. We became fast friends, making up for lost time, and our family life became quickly intertwined with the people who lived on the other side of the fence. We cooked each other meals, worked the land, swapped kids on lazy afternoons or busy evenings.

Something about other mothers, other children, made everyone, big and small, a little more expansive.

Then last March, all of a sudden, it was imperative that we not be together. And after the adrenalin of the first month or so wore off, the long period of no-child-care-in-sight began. In those bleary, endless days of the early pandemic, my “sister wives,” as we have come to call each other, and I would take the children to the beach. It wasn’t always warm, but they never seemed to mind. Courtney would bring grapes and a big blanket, and read to the younger kids as they hid from the wind under their towels. Christine would wander out into the sandbar on “missions to Mars” with my son, pointing out marooned jellyfish and picking at worm mounds with sticks. I would pace along the sand, snatching up bits of litter, trying to get my head straight, or take one of Courtney’s daughters to find a place to pee, as I was always restless for an activity to distract me from my own grief and rage. If I forgot something, someone else would have remembered. If one of my children was angsty or angry that day, someone would manufacture a diversion. Though our kids were never on their best behavior with our crew, as they had the familiarity of family, something about other mothers, other children, made everyone, big and small, a little more expansive.

It was not just the child care or the extra servings of dinner that saved us, though those bits of time and care — an hour where one of your children is happily running amok in someone else’s yard, a quesadilla magically appearing on a day when you cannot manage to heat butter in a pan — are too precious to put a price on. At its core, my salvation was in the bearing witness, these women seeing all of me: the good, the bad, the leave your kids in the house screaming while you lock yourself in your car and blast punk music, and loving every part. And witnessing the parenting of others, so intimately, normalized my own failures. I remember the day I came home from some furtive errand and Jon announced, with great satisfaction, that he had finally heard Courtney yell at her children. If that was the case, he felt, he could be forgiven for his own shortcomings.

Asking for what we need, and giving what we can is a balm for the fear that we are somehow not enough.

There is something else, too. Courtney speaks of the ways that having so many other adults around — the sister wives, yes, but also the older aunts and uncles of cohousing, many of whose children are grown and gone — frees us from having to be everything to our children, an unreasonable setup of modern parenting that burns so many of us out so quickly. Louise, a writer and activist in her 80s, teaches our kids how to garden. Tom teaches them how to notice small things. Kate knits them warm winter hats. Mary, using her walker to carefully navigate the path they so often barrel down, teaches them patience. This enriches the lives of my children, sure, but it also makes the emotional and psychological load of parenting, something that is hard to slough-off onto hired caregivers or after school programs, much lighter. When I think back on my years in that big house in Cambridge, I think about what my siblings and I gained from our nebulous circle of care, how, especially in hard times — the eye of a divorce, the long arc of a global health crisis, the cycles of grief that dot adult life — asking for what we need, and giving what we can is a balm for the fear that we are somehow not enough.

The other night we watched a movie, just our little family. Sometimes all of the unboundaried socializing is too much for my son, who prefers the focused attention of one of his parents. Courtney’s husband, John, came over to help us install our new TV, which we’d come down off of our no-TV-having high horse to purchase from Best Buy. Max and I made cobbler from the peaches that hang on either side of the fence, a phrase that is almost too precious to write, I know, and after dinner everyone came to our back door, which is almost always open, with bowls, got their dessert, and went on their way. Even on nights where we choose to be nuclear, there is always something to be given or received.

Christine is expecting a second child, a boy, and now my daughter asks me if she, too, can have a little brother. It singes my corners, to tell her no, but then I imagine the two of us, together, bathing Christine’s son in our kitchen sink, rocking him to sleep so his parents can spend an hour alone, clapping for his first clumsy steps, as the older children once did for her. I think of what all of my childhood housemates, many long forgotten, taught me about how to love, and I think that this is something I can give my children that is, in all likelihood, better than another sibling.

Let us build more rooms, outside of our four walls, if needed, and see who lets themselves in.

This time has been, for many, one of isolation. In and out of lockdowns, the headlines have decried the myths of the nuclear family. All at once, we are feeling the costs of our society’s obsession with individualism and suburban idealism, alongside the systemic ignoring, or in some cases, stripping, of family-first policies. It is both painful and touching, as a parent, to finally see these things called out. And yet, every time I read a story about how parents are collapsing, how children are suffering from lack of interaction, I feel a twinge of guilt. Because for my family, this time has most certainly been anguishing. But it has not at all been lonely.

We need policy changes, badly. We need paid parental leave and housing reform and to be compensated for domestic labor. And, many of us are in a better position than we think, with individual choices to make, more agency than we realize. The nuclear family is a lie and the idea that there is nothing we can do to undo this culture is also a lie. We are trapped, so many of us, by what our world thinks we should and shouldn't be or should or shouldn't have. But some of us, it turned out this year and a half, were trapped by something else, something invisible; the thing that keeps us from knocking on our neighbor's door, and saying, "This is what I need, and here is what I can give." Let us build more rooms, outside of our four walls, if needed, and see who lets themselves in.

To read and subscribe to Sarah’s newsletter, Momspreading, go here.