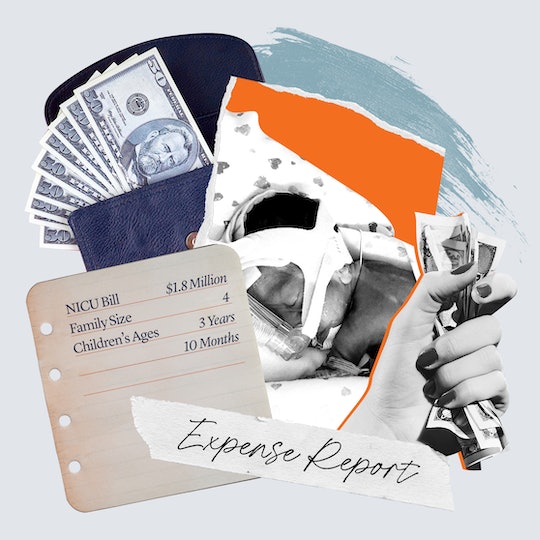 Where would we be without health insurance?

Raising a child supposedly costs you a quarter of a million dollars, but it can honestly be more daunting to face the idea of spending $80 on bottle nipples in a single month. Expense Report gives us a look into the spending, scrimping, and wishing that defines parenthood, from what moms spend on birthdays, to child care, to sleep, to self-care (we wish!), and beyond.

Nobody really enters pregnancy thinking, “Oh, my baby is definitely going to end up in the neonatal intensive care unit for a significant amount of time. I better start saving, like, yesterday.” It’s unexpected, scary, and can be really, really expensive to send a newborn to the NICU for a short amount of time, let alone months. Here’s how much one family spent during a 125-day NICU stay (not including the two weeks Mom was in the hospital). Their health insurance (offered via their employer) covered a pretty penny, but the out-of-pocket expenses still made a dent.

Family: A Mother And Father

At 24 weeks, I saw my OB for what I thought would be a routine checkup, but they sent me straight to the hospital when they discovered my elevated blood pressure. It was New Year’s Eve and we were planning on hosting a small get-together the following day. Hours went by, but I was convinced I would be home later that evening (a similar thing had happened during my first pregnancy and I went home after a few hours). After five or six hours, the numbers didn’t still budge. I almost had an emergency C-section that night, but just before, my body thankfully began to respond to a different medication and I was wheeled to an antepartum room instead of the operating room.

I stayed there for a week, not knowing if or when I would be discharged; “We’ll have to see,” is what the doctors told me during morning rounds and throughout the day. On day eight, my liver enzymes jumped to unsafe levels and that was it. My son was born via C-section at 26.6 weeks. He weighed just under 2 pounds.

I saw him for a split second before he was rushed to the NICU. His father got to visit him right away, but I wasn’t allowed to leave my hospital room until I was off the magnesium, 24 hours after delivery. The first time I got to hold him was 10 days later; my husband 11 days (two parents holding him in one day was too much for his body to handle). And then we didn’t get to hold him for about a month, maybe more, because he had a breathing tube and it’s dangerous to hold a baby on that kind of support.

Mid-March, halfway through our NICU stay, the pandemic hit New York City like a viral hurricane. In hindsight, I think the only difference that made for us financially is that we spent a lot of money on parking — and a lot less money on dates.

Pre-COVID-19, we only drove to the hospital on weekends and took the subway during the week. Once NYC shut down, we stopped using public transportation altogether and drove in. During the week, we parked on the street, dashing out every few hours to refill the meter. We usually found a spot within five blocks of the hospital, but not always. We used the lot on Saturdays when we knew we would get a flat rate.

Parking in the lot would’ve been way more convenient, but we were not comfortable having a parking attendant across the street from a hospital — or anyone, really — be in our car. (In NYC, they park the car for you). And it would’ve been exponentially more expensive. We saved well over a grand by opting for street parking the majority of the time.

Between pumping, feeding, changing diapers, holding your baby… you don’t always make it to the meter in time.

And sometimes you find yourself in a situation where you choose being a parent over getting a ticket. The logistics of holding our baby, especially during the first couple of months, were tricky. If we wanted to hold him, we had to commit to holding him for at least an hour because of how taxing it was on his body to transfer him from the isolate to a parent and back to the isolate. And then there is the fact that you never really know when you’re going to get to hold your baby because you don’t know if it’s the kind of day when the doctors try to take him off the respirator or the kind when he has to go back on because he’s not doing so well.

So sometimes the attitude is, I haven’t held my baby for days/weeks, so yeah, hit me with that parking ticket.

That being said, there were several times when I should’ve gotten a parking ticket and I didn’t.

The first few days after delivery, I pumped every two to three hours from my hospital bed. My husband ran out to buy a few things I needed ASAP in my room — a bottle brush and drying rack — to make my life a little bit easier.

Eating in or around the hospital can be expensive, so we tried to avoid it as much as possible by eating right before our visit or bringing snacks. Thankfully, the hospital provides lunch and dinner for NICU moms who are nursing, but sometimes I would forget to ask the receptionist to order a meal for me or I would just not feel like eating hospital food again. Plus, Dad’s gotta eat, too.

Before we started driving ourselves in, there were a few occasions when my husband or I would take a taxi home from the hospital if we were there late.

We only went on one date in 2020, back in February. I was seven weeks postpartum, everything felt weird and uncertain (and this was before COVID), so we treated ourselves to a sitter and nice dinner. $90 went to the babysitter, the rest on dinner and drinks at Italian hotspot Misi. (This was pre-pandemic, so hotspot meant something different.)

This was for the meds and supplements that were purchased from the hospital pharmacy. The nurse had me buy these before getting discharged so that they could explain how to administer them. Currently my son takes two supplements, which comes out to about $20 per month.

This is an insane amount of money, but when I reflect on how long he was there, the surgery he had for a hernia, the respiratory support he needed almost the entire time he was a patient and all the technicians operating the machines, the multiple rounds of steroids for his underdeveloped lungs, having the most attentive NICU staff watching him 24/7, the eye abnormality, all the times he had to be resuscitated — well, I can see how it adds up.

Even now, six months out of the NICU, we have periodical check-ins with specialists — from psychiatrists to occupational therapists to ophthalmologists — to keep an eye on his progress, and each one of those visits (many of which are virtual) are hundreds of dollars.

Of this bill, we have paid $3,103.45. I think we’re done, but inconveniently, hospital bills seem to trickle in rather than coming in all at once, so who knows.

Insurance covered most of the bill and Medicaid (which we qualified for because we were there for over 30 days) covered a decent amount (approximately $17,000). It’s paralyzing to think about what our situation would look like if we didn’t have insurance, and painful to know that it actually is a hard reality for so many.

If you would like to support premature babies and their families, please consider donating to March of Dimes.