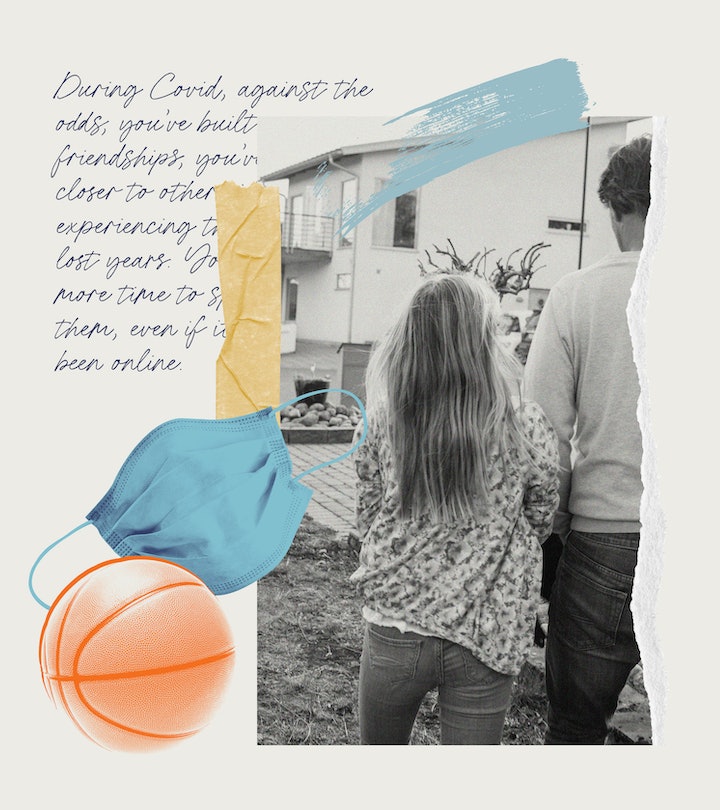 A Letter To My Formerly Over-Scheduled 7th-Grader

I walked past you the other morning, where you sit, in the dining room, on your laptop, “in school,” and I heard a man’s disembodied voice talking about bullying. It was your gym teacher, you were in “gym,” and it sounded like he was fulfilling some kind of requirement. He asked, “Now what do we do when someone says something mean?” Another voice came on the line, one of your classmates, answering something to the effect of, “We tell them that it’s wrong.”

“Yes,” your gym teacher replied, almost sighing, “that’s right,” adding, “that’s not how we handled it in my day, but things are different now.”

The episode with your gym teacher made me laugh. Not at your gym teacher specifically, but at the idea of gym teachers and gym classes and bullying. Un-athletic, clumsy, wearing comic-book t-shirts — in the days before the Marvel Cinematic Universe swallowed the world, in the days even before 1989 Batmania — gym class for me was a nuisance to endure, a place to go to suffer some harassment and derision, not where I went to get tips from the gym teacher on how to handle “when someone says something mean.” I can think of more than a few instances when the person saying the something mean was the gym teacher.

Unlike me, you always seemed to possess some athletic grace. Strength, flexibility, and a degree of control over your body I never had. In fourth grade you joined a competitive travel basketball team, playing other 10-year-old girls from other towns. You were new to the game, your only previous experience being an afternoon spent taking shots at a friend’s backyard barbecue, and surprising us all with how many you sank.

When you got on the team, you were, honestly, not great. Double-dribbling, traveling, you were haunted by those calls. Not knowing how to move, how to get open, or how to pass. But you could get those swishes. You barely played in “the real game” — we mostly saw you during “the fifth quarter,” the extra period at the beginning of the game for kids like you to have a chance to play. You sank a few shots during the fifth, but none that actually “counted.” But you did like playing that game.

Some games you were an absolute monster. Crushing those poor kids who’d put in none of the work you had. As your dad, I have to confess, I loved to see it.

So we helped you. We signed you up for a Monday afternoon youth league at “Hoop Group,” a basketball facility a half-hour away. You’d run drills and play pick-up games with boys and girls of varying skills and sizes. We put you in shooting clinics, core skills classes, basketball camps. You appeared up for it. At the start of many Hoop Group classes a coach would call out, “Are you ready to work hard and get better?” and it mostly seemed like you were.

And that hard work paid off. When you returned to your travel team in 5th and 6th grade, you were better each time. You got in during the “real” games, you moved better, you could get open, you could set up a screen. You saved a game or two, putting up points. And when you played in the more-informal just-for-fun “rec leagues” in town, you dominated. Some games you were an absolute monster. Crushing those poor kids who’d put in none of the work you had. As your dad, I have to confess, I loved to see it.

For this former “nerd” watching you progress, I began to understand things I’d never known about athletics and having a drive to achieve. For you, sports were a place where self-confidence could be built, not broken down.

All of that came to a halt a little over a year ago, when we all went indoors. Now, twelve months later, it’s not clear things will ever go back to how they were. It’s not clear that you want them to.

When I think back on your basketball years my feelings are mixed. I’m proud of your work, but from this new vantage point, I also feel a little bit queasy, recalling how competitive life became for you, and how quickly it got that way, a kid who just liked playing a game.

For many reasons that I’ve barely begun to process, I feel a deep sadness thinking back over the past “lost year.” We all are coming to terms with what’s been taken from us. And while it isn’t top of my list, the end of your basketball season to Covid is something I mourn the passing of. I think part of you will too, but I also wonder if this short chance to live a more under-scheduled life is necessarily a thing you’ll regret.

During Covid, against the odds, you’ve built new friendships, you’ve grown closer to other kids experiencing their own lost years. You’ve had more time to spend with them, even if it’s been online. You haven’t lived such an unavailable life. I don’t think I would have ever chosen this; if it hadn’t been out of our control, I don’t think it would ever have happened.

I’m feeling an urgency now for you to “unlearn” the inactive life of the last year. I want to push you back out the door and back into doing things. And you’re putting up some resistance. As much as I want to go back to life as it was, perhaps I need to learn that not every lesson of lockdown was a bad one. That being 12 and doing a little less some of the time is maybe not such a bad thing. We need to remember how we once existed in this world as it was, but we also all deserve the space right now to figure out how we want to exist differently in the world that’s become.

Mike Dawson is the author/illustrator of The Fifth Quarter, a middle-grade graphic novel inspired by his daughter.