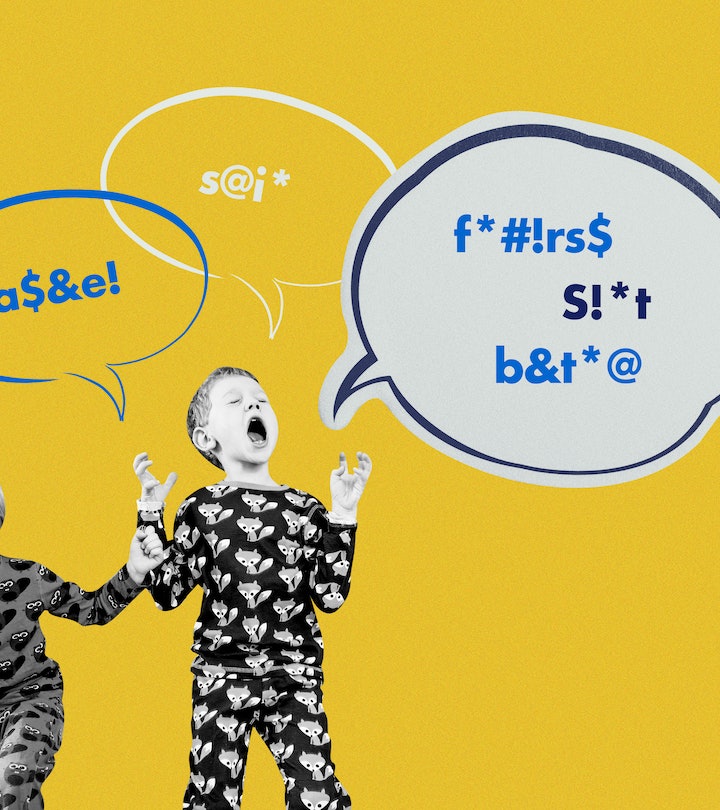 My Toddler Curses And I'm Fine With It

There’s just something about seeing a tiny person swear that’s more endearing than it is disturbing, at least for me.

As a lover of language, I feel giddy when my 3-year-old son randomly busts out new, unexpected words and phrases, like “this is perfect” or “actually, mommy…” I’m equally happy when he interprets language in his own unique way, like calling articles “marticles” or vitamins “bite-a-mins.” My current favorite is his habit of calling shorts “up pants.” I can’t bring myself to correct him because I know that one day soon enough, he’ll just call them “shorts,” and the adorable “up pants” era will be gone for good.

My son picked up another interesting word as he’s been toddling through life, and this one is a little more complicated. Somewhere along the way, he added “shit” to his repertoire, and I’ve been struggling with how to react.

The first time he said it, he was 15-months old. At least, I think that’s what he said. We were walking home from daycare, and I said, “OK, Cole, you lead the way!” And out of his mouth came: “Shit!” At the time I was shocked, but also amused. He was tiny, and he had no clue, at that age, what he was saying. Or did he? He didn’t utter the word again for over a year, but once he turned 3, “shit” came into regular rotation. Whenever he says it, I’m not sure whether I should laugh, ignore, or have a serious talk with the kid. I usually end up attempting to ignore him while simultaneously turning away to hide my laughter. There’s just something about seeing a tiny person swear that’s more endearing than it is disturbing, at least for me.

“The constant struggle of parenthood is managing your own emotions,” says Claire Lerner, child development and parenting expert and founder of Lerner Child Development. “The rule of thumb is that the more attention you pay to a behavior, the more reinforced it becomes. Therein lies the challenge.”

I did try addressing the word head-on once, when he said it at the park after tripping on a rock. We were in a public place with other kids around, so ignoring him didn’t feel like the right move. I’m OK ignoring him at home, but suddenly, out in public, I felt uncomfortable. Nobody wants to be pegged as the “bad mom” on the playground, so we sometimes correct our kids for things we’re actually fine with, just to avoid the shame.

I’m sure my parents cursed here and there when I was a kid, but I don’t remember it. As I got older I rebelled plenty, but I rarely, if ever, cursed in front of my parents. It wasn’t because they were scandalized by swear words, although my mom absolutely hated the word “fart” and to this day my sisters cannot bring ourselves to utter it. Even writing it down makes me cringe. I just hated disappointing my parents, so I never swore in front of them. If they ever talked to me about cursing, I don’t remember, but someone, at some point, must have taught me the difference between saying “dang it” and “f-ck it.” I guess it’s my job to do that for my son, no matter how hilarious it sometimes is when he swears like a 3-foot tall, 30-pound sailor.

I would be much more upset if my son never said “please” or “thank you,” or if he said “I hate you” or “shut up,” than I would be if he uttered “shit” once in a while when he was frustrated.

Of course, giving the word attention at the park that day didn’t stop my son from using it. He said it several more times, in a row, because if toddlers love anything, it’s getting their parents riled up. He kept asking, “Why is ‘shit’ bad, mommy?” in a loud voice, so I just deflected, distracted, and moved on. Later that night, I tried to explain why certain words aren’t nice to use in public. It’s a strange feeling as a parent when you start policing your kids for things that you, yourself, do all the time. It can feel a little hypocritical, but then again they need to learn how to function in society as kind, well-mannered humans. Kind humans curse all the time, though, and I’m sure there are some horrible people who’ve never uttered a “bad” word. The point is, for me, teaching my son about the word “shit” became more complicated than I expected it to be.

The whole episode at the park got me wondering whether I truly cared about my son swearing, or if my need to correct his language was more about social pressure than personal values. I would be much more upset if my son never said “please” or “thank you,” or if he said “I hate you” or “shut up,” than I would be if he uttered “shit” once in a while when he was frustrated. Granted, he hasn’t dropped any f-bombs yet — I don’t think I’d be so calm and collected if he started yelling, “Oh, f-ck this dump truck!”— but we'll cross that linguistic bridge if and when we come to it.

“Kindness is what matters to me. Using words as weapons is not allowed. There’s nothing hurtful about saying ‘shit’ when you spill milk," says Sarah Jane, a Texas mom with a 6-year old daughter who’s been known to toss out a swear word here and thereShe doesn’t punish her daughter if she uses non-harmful curse words at home, but she’s talked to her about practicing self-control when she’s at school or out in public where people might get offended. “I feel like it’s good practice as a life skill,” she says.

“She turned to me and said in her strongest, clearest voice, ‘Mummy, get me out of this f*cking high chair.’”

In researching her book Swearing Is Good For You, author Emma Byrne discovered that “children are less likely to become ‘problematic swearers’ if their parents talk about the emotions that drive their own swearing.”

Byrne told me that when her daughter was about 2 years old, they were at a restaurant and she wanted to get out of her high chair to play. Byrne explained that she’d have to stay in the high chair and finish dinner first, so her daughter dutifully did as she was told. That is, until, as Byrne tells it, “She turned to me and said in her strongest, clearest voice, ‘Mummy, get me out of this f-cking high chair.’”

As someone who’d spent hundreds of hours researching the positive and negative aspects of swearing, Byrne didn’t sweat it.

“To be honest I was incredibly proud, and somewhat relieved,” she says. “Instead of throwing a major tantrum, she'd let me know the strength of her feelings and the depth of her impatience. And her intonation was just perfect. I wasn't mad at all, but I do still dread the day that she uses strong language to the wrong person or in the wrong context.”

Swearing – especially kids swearing – isn’t for everyone, obviously, and Byrne says she’s had online commenters tell her she “deserves a slap” for defending cursing. She jokes that, by that logic, swearing is bad but violence is perfectly okay? “Oh, okay, thank you for your input!” says Byrne.

Simply telling kids that a word is wrong, while ignoring the emotions behind the word, signals to the child that their emotions aren’t valid.

“I don’t love emotional suppression,” says Robyn Koslowitz, Ph.D., a clinical psychologist and founder of the Targeted Parenting Institute. Instead of completely ignoring your child’s cursing or just saying it’s “wrong,” Koslowitz suggests sitting down with them and discussing alternate words they can use to express the same emotions.

If he’s expressing his emotions at home or in a safe environment, and those emotions involve some four letter words, used correctly — well, I might ignore him so he doesn’t repeat the word 85 times, but I won’t sweat it.

Dr. Neeru Jayanthi, a physician at Emory in Georgia, says that he’s urged his kids to say things like, “What the puck,” when they’re playing air hockey and they mess up, instead of the alternative. Other parents, like Caitlin Millay Krapf, a mom of two young sons in Ontario, told me, “I grew up swearing and we definitely swear around the boys and allow swearing, but I’ll correct them for usage and context. If you’re going to do it, do it well.”

In the cleverly named study "A Child’s Garden of Curses," the researchers concluded, “Considering the universality with which they occur, children’s acquisition of a taboo lexicon and taboo etiquette are normal language phenomena that occur in the context of normal cognitive and sociocultural development.”

Millions of us grow up and swear, and we’re not horrible humans out to destroy society. We say, “Oh shit,” if we spill something or forget our keys. We blurt expletives that would have 15 beeps on national television if we stub a toe, or at least I do. If you have enough self-control to yell, “Oh, sugar!” when you’re really feeling, “Oh shit!” then good for you, and your well-mannered children. It’s not that I want my son to run around cursing, and I’ll definitely get upset if he uses words as weapons, as Sarah Jane said, or if he stops saying “please” and “thank you,” or if a teacher comes to me and says, “You know, Cole yelled ‘f-ck math!’ in the middle of kindergarten today.” If he’s expressing his emotions at home or in a safe environment, and those emotions involve some four letter words, used correctly — well, I might ignore him so he doesn’t repeat the word 85 times, but I won’t sweat it.