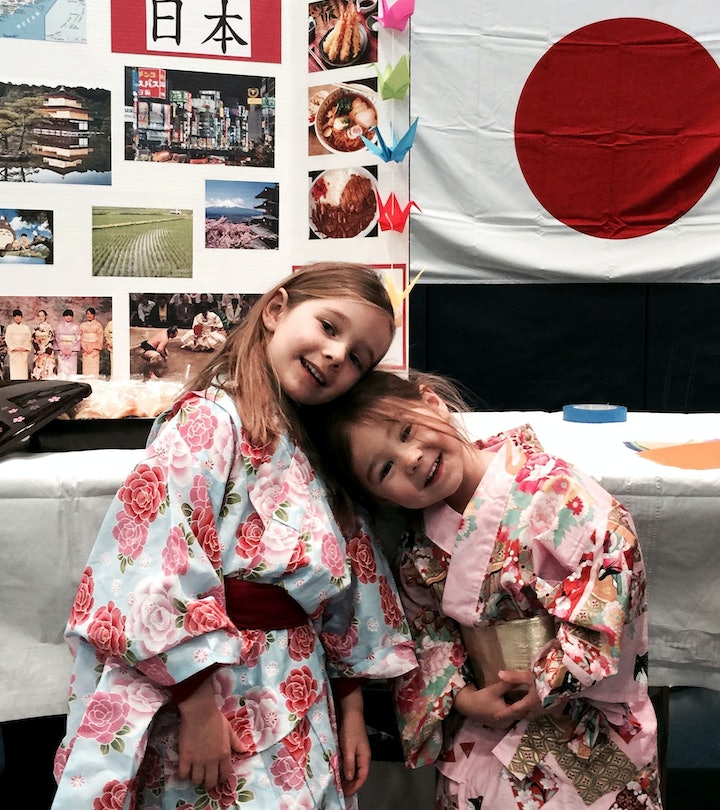 What Gets Lost If I Don't Pass On My Mother's Language To My Children?

If I have been mothered in Japanese, if my models of what it means to be a strong woman flow down the matrilineal line of my family, how will I pass it all down to my girls who don’t speak the language?

When I tell people my mother is from Japan, I’m usually asked, “Do you speak Japanese?” I say yes. Yet the swell of pride I’ve always felt about my bilingualism is tempered these days by a common follow-up, “Do your kids speak it?” This question lays bare my shame — of not passing down to my three daughters a vital part of my identity, of letting my mother down. It also pokes at a more ominous worry: that I no longer speak Japanese well enough to teach them.

Growing up, my relationship with my mother was inseparable from Friday night fights over homework for hoshuko, Saturday Japanese school for native speakers. Many of my classmates were only in the U.S. for a few years; together we studied literature, writing, and math using the textbooks from the standardized public school curriculum in Japan.

Every summer until high school, my mother and I flew to Tokyo and took over the tatami-matted sitting room of the house she grew up in. For two, rainy, humid months I spoke little English, watched samurai dramas and local news with my grandparents whose TV was always on, and wandered upstairs where my aunt lived to watch her cook or play with her cats. As an only child like my father, these visits to Japan were my only experience of being surrounded by extended family. I relished time spent with my mother (who took summers off but worked full time otherwise), her two sisters, my two cousins who are a decade older than me, and my grandparents. It was, mostly, a world of women. I loved hearing their stories, and falling asleep to the sound of laughter as my mother and her sister stayed up late to catch up on a year’s worth of togetherness.

Each of my daughters’ births was, I know, the first of their myriad separations from me. Summer defining her own racial identity is a severing in the best of ways.

If I have been mothered in Japanese, if my models of what it means to be a strong woman flow down the matrilineal line of my family, how will I pass it all down to my girls who don’t speak the language?

It’s taken me a long time to articulate this question. My multiraciality has caused me to wonder whether I’m Asian enough. Japanese enough. Enough. At hoshuko I wasn’t up on the latest J-Pop stars and Tokyo trends and sat alone with my best friend, who also has a Japanese mother and white American father, to eat lunch. In high school and college I rarely participated in Asian affinity spaces, feeling like an imposter there as well. It wasn’t until graduate school that I had the option of joining a multiracial affinity group. Listening to my classmates' stories, I saw so much of myself reflected back. I finally felt the power of such groups that I’d seen many of many of my friends of color experience for years. This broke something open for me and empowered me to connect with the Asian affinity group too.

My eldest daughter, Summer, started middle school this year. Her new school has multiple affinity groups, including a multiracial one. I was excited at the potential for her, at age 10, to experience something I didn’t until my mid-30s. She chose to join AsIAm, the group focused on “the East and Southeast Asian experience.” It’s astonishing. Watching my girls learn piano and violin and play soccer — all things I’ve never done — did not come close to preparing me for the impact of learning that Summer made this choice. Each of my daughters’ births was, I know, the first of their myriad separations from me. Summer defining her own racial identity is a severing in the best of ways.

I’ve stopped using the modifier “half-” as I don’t like to imagine myself with a line bisecting certain parts of who I am. I am Japanese. I am Asian. At the same time, my Japanese language skills are receding. Imperceptibly, the way the sea laps its way out at low tide. I grasp for words my teenage self would have known. My sentences trail off. My mother, who has lived in the U.S. for two thirds of her life now, is fluent in English. But it’s not our language together. I’m terrified that I, like Benjamin Button, am getting younger and younger in the textures of my mother tongue. How will this impact my sense of wholeness?

My daughters want to learn Japanese. We tried the hoshuko near us that offers a separate program for non-native speakers. We’ve had a tutor come to our house. Neither led to much success. Each time my partner suggests that I should “just teach them,” I reply “it’s just not my emotional language.” But it once was. Cue my shame in weakening their link not only to my mother, but to our family in Tokyo, who speak no English. Cue my fears about the implications for my own bonds with these women.

I am passing down, just as they continue their work of pulling away. Language does not equal legacy.

When my mother got her first iPhone some years ago we started texting, mostly in Japanese. She’s learned OMG and has a deep bench of cat memes that delight my girls. My fading kanji is bolstered by an app that lets me look up their strokes. We’re equally fluent in emoji. I channel my fear that she will face violence on the streets of NYC, where I grew up and my parents still live, into my work in equity and inclusion. I co-developed a workshop on the history of anti-Asian racism and AAPI activism that I’ve facilitated for the school my younger girls attend and other institutions where I volunteer. Unbeknownst to me, Summer was doing the same. She and some friends from AsIAm put together a presentation on AAPI activists. Earlier this month, as she Zoomed into school, I heard her utter several familiar names — Yuri Kochiyama, Helen Zia. I stopped to listen in and realized that I was witnessing her portion of the presentation, given during middle school assembly.

It hit me that my girls are Japanese like me: Proud, unbound by fractions — they are no more “quarter” than I am “half”— or language skills. I am passing down, just as they continue their work of pulling away. Language does not equal legacy. My girls and I will always be a continuation of the line of outspoken women born in Tokyo, including my mother — the only one who left, who’s been forging her own path ever since.