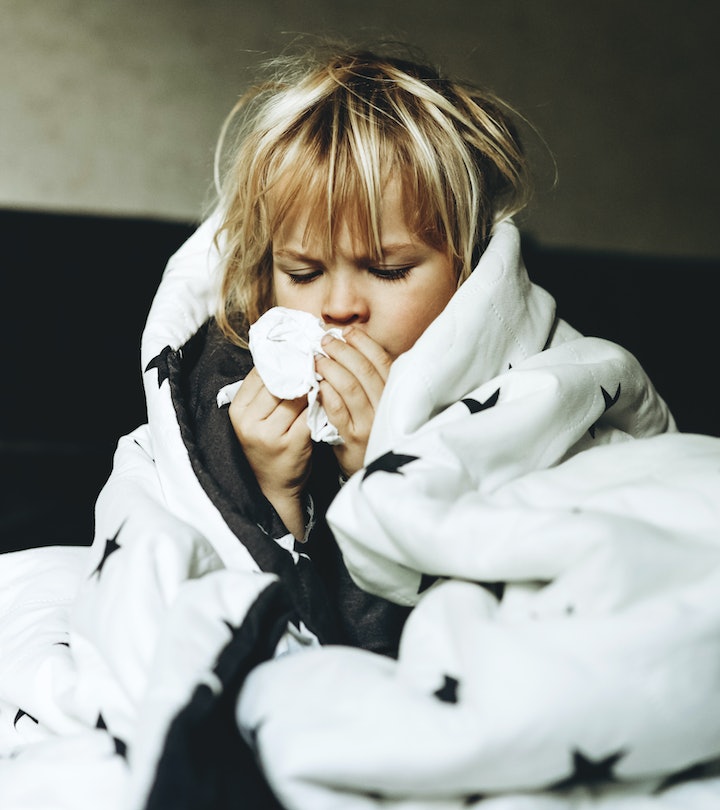 A Guide To RSV In Toddlers

What to know about this common virus that most kids get before age 2.

There’s a meme out there somewhere about giving a child care facility your income only to have them deliver back a new virus every week; toddlers are mini cesspools of respiratory illnesses. A common illness that makes its way to them: respiratory syncytial virus (also known as RSV), a virus that almost all children under 2 come down with at one point or another. Because it’s possible your child will get it at some point, it’s helpful to know what RSV in toddlers looks like, so that you’re somewhat prepared to handle this illness.

RSV sounds scary, but in reality, most of the time it is mild. It shows up as a cold, lingers a bit, and clears on its own. That said, RSV can be dangerous for young children, especially those with risk factors for more severe disease.

Have little ones in your life? Here’s what you can expect if your toddler shows signs of RSV and how to — do your best to — keep viruses outside of your home.

Symptoms of RSV in toddlers

Signs of RSV in toddlers might include those of other common upper respiratory infections:

If this happens, you may notice any of the previous symptoms plus things like:

These are all signs that your toddler could be having a hard time breathing and needs medical attention. Lower respiratory infections can also progress to things like pneumonia (an infection of the lungs) or bronchiolitis (inflammation of the small airways of the lung).

It’s worth noting, though, that it's often the youngest babies who get into the most trouble with RSV and are at an increased risk for significant lower respiratory tract disease, says Dr. Mary T. Caserta, M.D., a pediatric infectious disease specialist at The University of Rochester Medical Center. RSV is the number one reason babies get admitted to the hospital in their first year of life, she says.

As children grow, their airways grow with them, and they tend to be more robust in fighting infections, says Dr. Shaila Siraj, M.D., a pediatric hospitalist at Johns Hopkins All Children’s Hospital.

That’s not to say that toddlers can’t get very sick from RSV; they can. Every year in the United States, about 58,000 kids under 5 years old are hospitalized for RSV (for reference, in 2021 there were about 24.6 million kids under 5 in the U.S.). So always take any symptoms of trouble breathing seriously.

How to treat RSV in toddlers

If your child has RSV, there are plenty of things you can do at home to help them feel better:

Remember though, sometimes more serious treatment is needed; about 3% of children with RSV will require a hospital stay​ — usually because they are having trouble breathing or because they are dehydrated.

In these cases, your toddler may need:

Most kids go home after a few days of care in the hospital.

How long does RSV last in toddlers?

RSV will likely linger more than a few days. The good news is most RSV infections resolve on their own in a week or two, says Dr. Joanna Parga-Belinkie, M.D., an attending neonatologist in the Division of Neonatology at Children's Hospital of Philadelphia.

RSV could last as long as three weeks, says Parga-Belinkie. “Generally, symptoms peak at day three to five – so hopefully after the first five days or so, there is improvement and you can be less worried.”

A more serious course of virus is more likely in toddlers with risk factors for severe RSV, including kids under 2 with chronic lung disease or congenital heart disease, children with weakened immune systems, or kids with neuromuscular disorders.

How to prevent RSV in toddlers

Toddlers are toddlers, and simply because of their gregarious nature, they are often around people — a big risk factor for contracting or spreading RSV.

That said, there are good precautionary measures you can always take to keep RSV and other viruses like it at bay:

It’s also important to remember that it’s incredibly likely that your child will get RSV before they turn 2, and since many cases are mild, you may not even know your child had it.

So while there are certainly steps you can take to prevent infection (and good stay-healthy habits you can help your toddler build), in many cases, RSV is inevitable.

Joanna Parga-Belinkie, M.D., an attending neonatologist in the Division of Neonatology at Children's Hospital of Philadelphia.

More Like This
Why Do Toddlers Line Up Toys? Experts Explain This Classic Toddler Behavior
Why Do Toddlers Throw Themselves On The Ground During Tantrums? They Have Their Reasons
Here’s Why Toddlers Sometimes Cry So Hard They Throw Up
Is It Good For Babies To Be Exposed To Germs? It’s Complicated