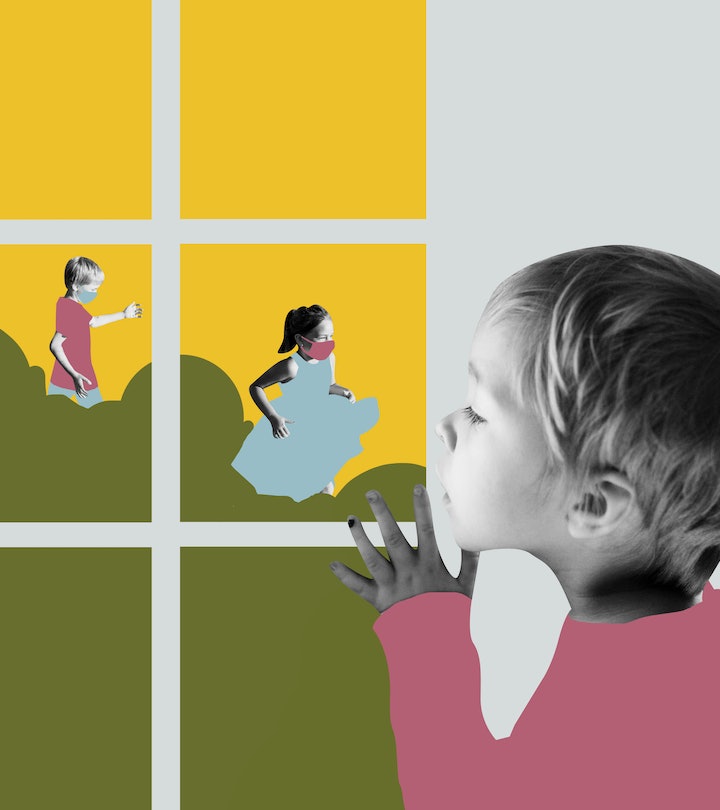 Shedding The Guilt Of Raising An Only Child

I don’t regret the decision, but, especially during a pandemic when birthday parties and playdates are no more, there are those moments when guilt comes knocking.

I love peeking out the window to find my 3-year-old son playing by himself in the backyard. He’s usually out there talking to imaginary friends, or maybe even to himself. Whoever it is, he always seems to be having an amazing conversation. While he yaps away, he’ll dig in the dirt with a shovel or cook plastic hamburgers with his pretend grill, perfectly content for 20 or 30 minutes, which is an eternity in toddler time. Sometimes I feel bad and wander out to play with him, but mostly I’ll leave him alone with his imagination. That is, until he inevitably starts yelling, “Mommy!” because he wants a real buddy to play with. At home, my husband and I are all he’s got.

After having our son with the help of IVF in my early 40s, my husband and I agreed not to have more children. We felt incredibly lucky to have a healthy child at our age, and I didn’t want to tempt fate. Plus, we both worked, and Los Angeles, where we lived at the time, was an expensive city to raise a child in, let alone multiple children. I don’t regret the decision, but, especially during a pandemic when birthday parties and playdates are no more, there are those moments when guilt comes knocking. It happens if I see my nieces and nephews playing with their siblings, or when I hear my 3-year old son beg me or his dad to play with him yet again because there’s no one else around. I love that he can entertain himself. I know that solo play stimulates his imagination. Still, am I depriving him of something meaningful, like a younger brother or sister to make fun of mom and dad with? Or a sibling to lean on when his parents are no longer around?

My adolescent years were defined by a constant quest for alone time. As the oldest of 4 daughters, there was a constant assembly line of little sisters banging on my bedroom door, stealing my clothes, or mortifying me in front of a crush (the worst). As annoying as a gaggle of sisters coexisting in the same house could be, I actually love being the oldest of 4. I always have someone to call or text in a major or minor crisis. If one sister doesn’t answer, I just move on to the next. My son will never have that connection. He’ll have plenty of privacy, but sometimes I wonder if that’s a fair trade.

“You can be lonely even when you’re surrounded by 100 people,” says Ashley Martin, 34, a ski instructor in Breckenridge, Colorado, who was raised an only child by a single father. “I loved being an only child...I grew up learning how to entertain myself with a world of books. I’m always able to entertain myself and keep myself occupied.” Martin talks about having kids with her boyfriend, who is also an only child. They’d both be fine with one child or multiple, since they know firsthand that being an only doesn’t doom you to a life that’s less-than.

No, only children are not destined to be selfish, or to fall behind in school, or to be plagued by loneliness.

For Sydney Stoudmire, a writer and mental wellness coach outside of Chicago, Illinois, having even one child was never part of her plan. “I was not planning to marry or partner,” she says. When she was 29, she found out she was expecting her daughter, days after she had broken up with the father. She’s working on co-parenting with her ex, and she sees her daughter thriving as an only child and a toddler. Stoudmire says she’s inquisitive and imaginative and a little bit of an old soul.

“I’m fortunate to have the support of my family, which is very matriarchal,” Stoudmire says. She lives with her grandmother and one of her sisters, and her other sister and mother live close by. “I do recognize that having siblings is definitely a privilege,” Stoudmire says. That said, she also loves that she can give all of her attention (when she’s not working) to her daughter. “I have a very distinct and special bond with her,” she adds.

Sarah Baird, a 32-year-old journalist in Kentucky, loved being an only child. The experiences she had alone with her parents, traveling or exploring, enriched her life. Baird, like many parents, believes that attitudes about only children have come a long way. Her daughter, Maude, is 2 years old, and Baird and her husband considered having another child “in pre-COVID times,” but the challenges of the past year have put that idea on hold.

“I’ve romanticized having a big passel of kids at various points,” Baird says. “The reality is that I just appreciate alone time too much — and require it for my work.”

Having one child works for many families, but the stereotypes that exist about only children still linger, and add to the guilt that some parents might feel.

“We have 1950s culture and attitudes baked into our society,” says Dr. Susan Newman, social psychologist and author of books like The Case for the Only Child. In her decades of research and writing about only children, Newman says that most of the myths about only children have been debunked. No, they’re not destined to be selfish, or to fall behind in school, or to be plagued by loneliness. Another stereotype that’s falling away is the idea that parents with one child are lacking, or they’re not a complete family. “There has been a huge change in how people view parents raising only one child,” she says. “The stigmas are vanishing.”

Newman says only children also tend to have more time to pursue their passions or figure out what they love, since they’re not having to bargain with a sibling who wants to play dominoes, say, when they want to paint.

“I work to parse internalized cultural messages about 'only children' out from what my child’s life is actually like, which is a beautiful, joyful life.”

Molly Boeder Harris, a nonprofit director in Portland, Oregon, says she and her partner were on the fence about having kids. Fourteen years into their relationship, when she was 40, they decided to try. Her daughter is 3-and-a-half, and while Harris says she does have moments of guilt, they’re “fleeting.”

“I believe that most of those feelings are because I have internalized cultural messages about ‘only’ children,” she says. “I work to parse those out from what my child’s life is actually like, which is a beautiful, joyful life.” For Harris, the biggest challenge is that she and her partner are their daughter’s parents and her playmates. “We are constantly on,” she says. The positives, though, outweigh the tough moments. “I can give my fullest and best self as a mother while also continuing to nourish who I am outside of that one role,” Harris says.

That’s a big one for me as well. As spent as I might feel after juggling a toddler with work and everything else that comes along with being a woman in 2021, I feel like what I am able to give my son is the best I have. At least, most of the time. I think I’m actually a better parent having one child, plus I love being able to hug my son and say, “You’re my favorite,” with zero guilt. I try not to say it all the time, and I also try to make sure to set rules and give him little chores so he doesn’t grow up to be a total tyrant. Whether you have one child or five, parenting is always a balancing act. I am trying to remember that he’s not destined to grow up lonely, and if he doesn’t have siblings to call, he’ll have plenty of cousins and friends to lean on.

I think Sydney Stoudmire put it best when she told me that kids “have the wonder to be able to fill in what’s missing, so we need to trust them to be able to do that.” The next time I’m watching my son play alone outside and that old familiar guilt creeps in, I’ll remember those words, and trust that my son will be just fine.