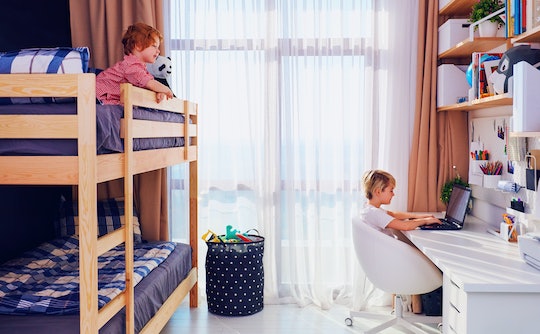 The Benefits Of Kids Sharing A Room, & How To Do It Right

There’s a lot of good from that shared space.

Having two siblings share a bedroom is something that is typically viewed as a negative thing. Sure, it might be ideal for each child to have their own space, but sometimes that’s just not possible — and that’s totally OK. In fact, it might be more than OK. There are plenty of benefits of kids sharing a room, from fostering a close relationship between the siblings to helping them learn things they might otherwise not get.

If you’re feeling nervous about having two of your children share the same bedroom, allow these expert-backed benefits to calm you down.

The Benefits Of Kids Sharing A Bedroom

Sharing a bedroom might not be the perfect situation you imagined for your little ones, but it still has plenty of positives.

The Best Age Difference Between Kids Who Share A Room

It’s not always possible to consider the age difference between two kids who need to share a bedroom, but it’s still worth thinking about. Experts generally agree that the closer in age they are, the better. “The biggest worry I have is when it’s a significantly younger child with an older kid,” Dr. Stark says. “There is a difference in bedtime and parents may want the older child to go to bed at the earlier time. Those parents don’t understand the older child needs privacy and space and they’re going to up late doing homework.”

Still, having an age gap isn’t all negative. Ford says that she thinks kids will work it out no matter what the age gap is between them.

Is It OK For Brothers & Sisters To Share A Room?

Many parents feel awkward about having their son and daughter share a bedroom, but in many cases, it’s totally fine. “Just because they’re a different sex doesn’t mean they can’t get along,” Dr. Stark says. “It depends on their personalities. Some kids just click.”

The real controversy here, as Dr. Stark points out, is the sex difference and the privacy issue. One way to get around that, she says, is for parents to help create privacy boundaries. “One child can change in the bathroom, one in a dressing area in the bedroom,” she suggests. “Room partitions can also help with that.” It’s all about talking to your kids and determining their comfort level and how they feel about sharing a room, especially as they get older.

There are also specific benefits of having a brother and sister share a space. “They can share toys and dressing up clothes, too,” Ford says. “I think this is brilliant for narrowing the gender gap.”

Should Kids Eventually Have Their Own Bedrooms?

Kids sharing a bedroom at a young age doesn’t feel like that big of a deal — it’s as they get older that problems arise. So, is it absolutely necessary for them to eventually have their own bedrooms? Nope. “It’s not the end of the world if they don’t have their own room,” Dr. Stark assures us. “Sometimes you can’t afford to do it. Talk to your kids about what’s important. I know one family where the kids wanted to be in the same room. Ask your kids how they feel about it.”

How To Make Kids Feel Like They Still Have Their Own Space, Even In A Small Room

It’s easy for kids to feel like they don’t have any space of their own in a shared bedroom, especially as they get older and privacy becomes more important to them. Here are some tips on how to fix that:

How To Ease Kids Into Sharing A Bedroom

Maybe your child has grown up with their own room, and now has to share that space with a sibling on the way. Or maybe you guys are moving into a different house, and they’ll have to go from their own bedrooms to a shared bedroom. Either way, making that transition can be difficult. You can make it easier for your little ones with open communication, especially for new siblings. “You just have to give them plenty of notice and conversation about sharing not just their room, but their life with this new little person,” Ford says.

Don’t expect that communication to make things all better, though. Your child might still be disappointed, and that’s OK. “Allow them to be unhappy, even mad. Be understanding, it is hard to share,” Dr. Saltz says. “Allow them to feel what they feel, and be empathetic that it is hard.”

Dr. Gail Saltz, psychiatrist, psychoanalyst, columnist, television commentator, author of The Power of Different: The Link Between Disorder and Genius (Flatiron 2017), and host of the How Can I Help? podcast