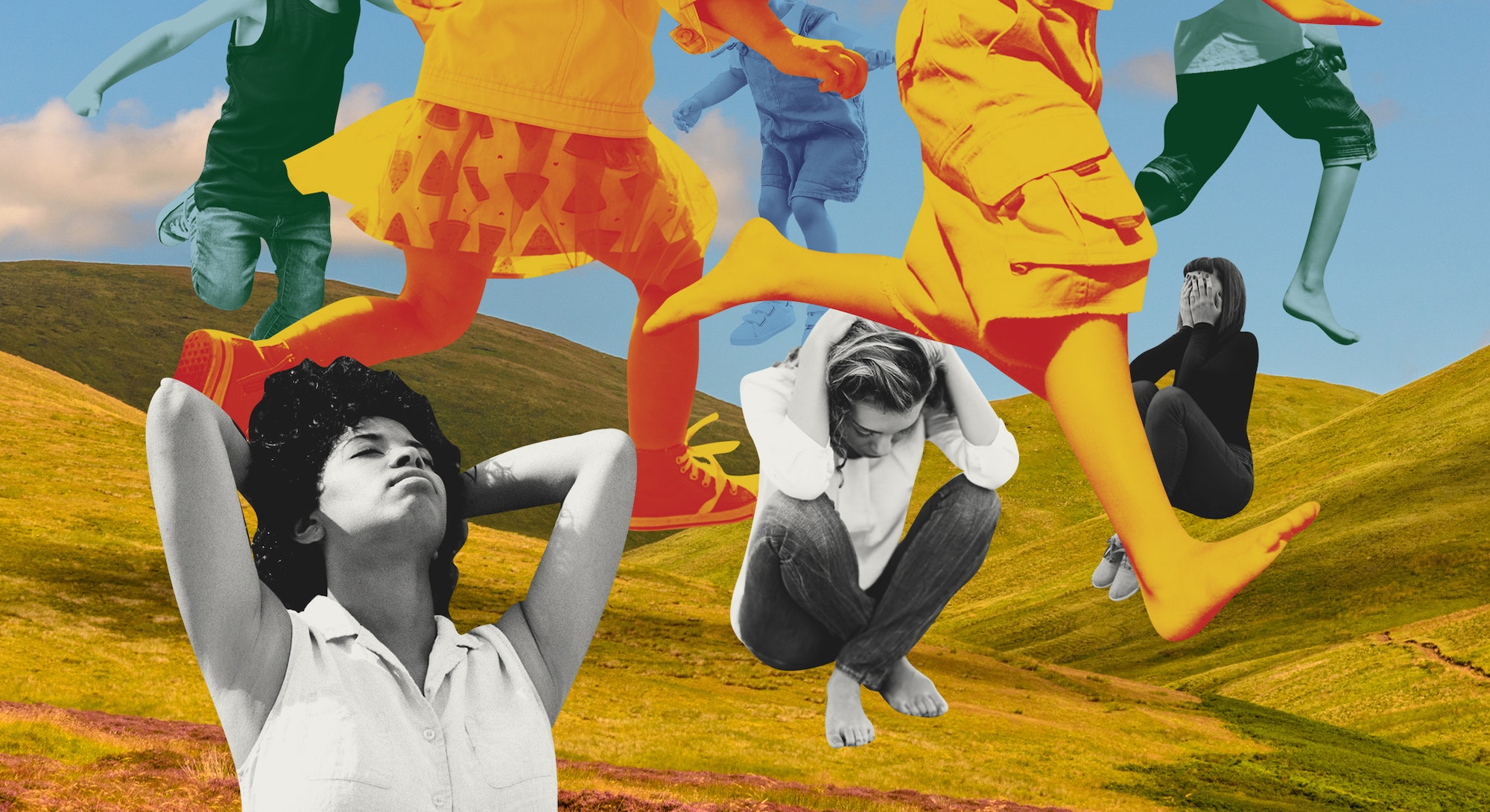 Summer used to be my favorite season. But this year I will be staying on Lexapro.

In memories of my Texas childhood, the few months between school years unfolded into an expansive landscape of play. Summer pressed pause on the anxiety-induced stomachaches that sent me fleeing to the school nurse’s office week after week. Once June arrived, I would burn the soles of my feet on the local basketball blacktop, then happily scrape them against the plaster floor of the Jewish Community Center pool. I'd suck down long frozen tubes of brightly-colored corn syrup and slap hungry mosquitos off my friends’ legs in the grass. I’d stand in front of the drugstore A/C as my sweat froze into jewels; I’d doze in the hot car after a long day far from my parents. I was free.

I took for granted that once my daughter reached school age, her summers would resemble mine. After so many seasons of yearning (including the pandemic home-school era of which we do not speak), this year we’ve finally reached my child’s first real summer. But decades after my own sun-soaked reveries, summer looks very different for our family — and many other families across the country. With the high price and limited availability of camps, the increased cost of living demanding more double-working-parent families, fewer multi-generational households than in other nations, and the societal expectation that parents (often mothers) are on their own to figure it all out, the divide between the way we spent our summers as kids — and how our parents spent theirs when we were young — and how we are now forced to approach the season as caregivers has expanded into a gaping chasm.

Maybe I should have seen this coming in early May when, feeling buoyant and almost on the other side of my kid's first year of public school, I pitched safely tapering off my anti-anxiety medication to my psychiatrist. I hoped that I could fly solo for the summer, a season I’d always associated with happy possibility. My scaffolding was ready, I thought.

I had scrambled for months to assemble a patchwork of child care plans for the summer to ensure that I (as the more flexibly-employed parent) could continue to work. I was lucky (and early) enough to sign up my daughter for a full slate of camps, but they mostly began at 9 and ended at 3, much less coverage than a regular workday demands. We were also hoping to finally visit family on the other side of the country — my daughter’s first plane ride since January 2020 — but making any travel plans felt like tempting the Covid gods. Plus, the soaring flight prices made our budget groan. Add to the mix that Cardi B was forecasting a recession on Twitter, the Supreme Court was threatening to send society back to the 18th century, and the threat of yet another terrible fire season was casting an orange-colored shadow across the West Coast. It was all a recipe for a breakdown — mine specifically. In retrospect, maybe my head was stuck in the sandbox of my past.

My psychiatrist didn’t think the time was right for me to try raw-dogging reality. “Increased time with your child can be fun of course,” she offered, but suggested waiting to see how I felt in the fall. She also confided that she’s telling a lot of mothers not to make any big moves over the summer.

Although it’s impossible to anticipate all the ways our society will break your heart, disillusionment with the warmer months isn't just about buckling under the weight of normal parental responsibility. Summers are getting worse. For one, they’re growing hotter on average, and the number of extremely hot days is increasing. Across the country, June already hit temperatures more typical of July or August. In my home state of Texas, experts (and my parents) are worried that the deregulated power grid — which already failed spectacularly during the winter — won’t hold up as temperatures skyrocket past even the scorching highs I remember. Summer has always meant hurricane season for families living near the Atlantic or the Gulf, but those storms are getting worse too. Here in San Francisco where summer is affectionately called “June Gloom” for its usual cool fog, and few homes have air conditioning (mine certainly doesn’t), heat waves have become more common, even causing rolling power outages and pleas for conservation. West Coasters, who used to get a reprieve from fire season until at least mid-summer, now live with wildfire risk all the way from spring until early winter. Every time I pass the parched yellow hill in the center of my neighborhood, I remember how quickly those clouds of smoke can descend.

It doesn't take an anxiety disorder to feel climate change's pressing and ominous threat to our children's future, but for lots of parents across the country, risks of illness from the smoke, heat, or floodwaters already disrupt summer child care. Even while I was writing this piece, my daughter’s asthma, exacerbated by wildly high pollen counts and unseasonably hot, dry winds, kept her home for four non-refundable days of camp.

In fact, summers capture the depths of the child care crisis in this country. I live in an expensive city, but even I was shocked to learn that according to the American Camp Association (ACA), the average cost of day camp in the U.S. more than doubled since last year: from $76 to $178 a day. Let’s not forget that a “day” of camp rarely aligns with the standardized American workday. That gap means hiring more help, or borrowing from a parent’s paid hours, and — if available — limited vacation time. (And even dealing with colleagues who may be fed up with parental accommodations.) Without accounting for any extra support (or lost earnings), $178 a day for 11 weeks puts the average cost of summer child care at a whopping $9,790, more than the average yearly cost of pre-school-age care in this country. So much for my excitement about finally reaching the holy threshold of public school and leaving behind the expense of private education.

All the same issues affecting other industries right now are at play in summer camps, too: inflation, skyrocketing rent, scarcity of materials, family caregiving obligations, and the ongoing effects of Covid surges. After a tough couple of years through the pandemic when she took out a PPP loan to pay counselors and reduced capacity to meet Covid safety requirements, Alamander Camp Director Sasha Siegelbaum moved operations from Brooklyn to Mount Kisco, New York, this summer. The decision was a personal one — the area has a specialty school for her older child who has a disability — but the camp’s future in Brooklyn was already shaky, since the location they had rented for years in Clinton Hill (and where I’ve sent my own daughter) was recently sold. Finding a new space large enough to accommodate the camp would’ve been an uphill climb for Siegelbaum; she and her co-owner would likely have closed Alamander altogether if not for the move. “Camp is such an important piece of growing up and exploring your interests,” Siegelbaum said, emphasizing that quality of care is as essential as coverage, if not more. “It’d be great if we could find a way to subsidize it.”

The recent jump in camp prices may be skewed by spikes in expenses from beefed-up health protocols (including apps and forms for daily health check-ins) and increases in demand now that parents are more comfortable with group settings, but costs before Covid weren’t sustainable either. Back in 2018, an analysis by the Center for American Progress estimated that the average family should expect to spend 20% of their income during the summer on child care costs. And almost half of parents surveyed by New America for a 2018 report on The Summer Care Gap said that it was hard to afford care for their kids over the summer. As with most parenting challenges, there are cheaper paths out there if you have the time, flexibility, and feral determination required. Nonprofits like the YMCA or my old friend the JCC, and municipal efforts like San Francisco’s Summer Together program, offer more cost-effective options for parents, but space is limited and caregivers have to know where and when to start looking. Our own SF Parks and Rec’s fantastic and very affordable camps, for instance, required logging into their website at a precise time on one specific morning and I missed my chance by a day.

Even that symbol of childhood summer, the bustling public pool, is suffering in this economic and public health climate. After two years of closed facilities, canceled activities, and delayed milestones due to Covid, this summer held the promise of a return to chlorinated waters. But in June, the NYC Parks Department announced that it was canceling all swim programs across its pools, and the American Lifeguard Association estimates that nearly half of public pools across the country will be affected by labor shortages this summer. Some cities are increasing lifeguard pay — which is typically at or just above minimum wage — in the hopes of solving their problem locally. Parents who have their own pools or can afford access to private ones will be able to give their children the life-saving lessons required to thrive in the water. But for many families across the country, kids just won’t learn how to swim this summer. Add that heartbreak to the ever-growing pile and pray that the next headlines coming our way aren’t about increased rates of drowning.

As parents, we often muscle through rough patches by reminding ourselves to be grateful. Grateful for self-soothing sleepers and new vaccines, grateful for a fading scar or a temporary pardon from a bad cold. In the face of this summer’s mounting challenges, I’m endlessly grateful for the support system I’ve constructed and have been lucky enough to benefit from — including, of course, the Lexapro I’m still popping and the psychiatrist who encouraged me to take care of myself. I’m equally grateful for my parent friends, my family and community, for my daughter’s emotional resilience and the effectiveness of a home nebulizer for her asthma. I’m grateful for wonderful summer memories from my childhood, and the ability to find new ways to give my daughter her own, even if they’re not the same as I imagined.

I’m grateful to live in California where public schools continue to provide free lunches to all students during the school year through summer months even after the federal Child Nutrition Covid-19 Waivers expired in June, and where legislators are working to make the state a safe haven for trans kids. I’m grateful for the teachers and counselors who are caring for my daughter this summer, who love her more than the job requires (or frankly, compensates for). Finally, I’m grateful for the one eternal truth of parenting: that everything is just a phase, and that — barring a cataclysmic environmental or gun-related event — one day my child will be a teenager and then an adult who can make her own choices about how to spend her time during the summer. Rest assured, I am grateful. But this year, I am also tired, very anxious — even while medicated — and furious at the political and capitalistic forces in this country for dropping American families into yet another deep hole of unexpected stress without the priorities or policies in place to help us climb out.