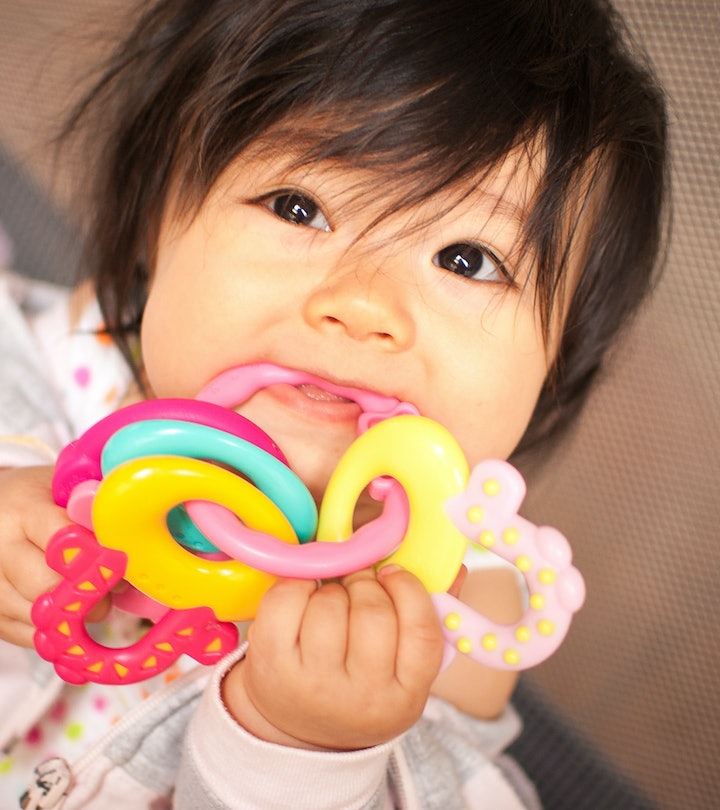 Is A “Teething Fever” Really A Thing? Pediatricians Explain

How to tell if Baby is sick or just teething.

When your baby has a fever, it’s only natural to want there to be a tidy reason for it, and the thought that a fever could be caused by Baby teething is such a comforting idea. Flushed, red cheeks and warm foreheads are enough to put even a seasoned parent into a whirlwind of worry and wondering. But if your baby or toddler has a true fever, could it really be teething? Or is a baby teething fever just a myth?We asked two pediatricians about teething fevers, and to explain, once and for all, if teething can cause a fever.

Can teething cause a fever?

Myth or truth: Does teething cause fever? “I want to debunk a teething myth,” says Dr. Elisabeth DiPietro, pediatrician at Hyde Park Pediatrics in Boston. “Teething does not cause a fever in your child! Though children can seem a bit warm from teething, any temperature over 38 degrees C or 100.4 degrees Fahrenheit is not due to teething.”

Experts agree that if your baby truly has a fever — a temperature of 100.4 degrees Fahrenheit or higher — it is not caused by teething. However, it’s understandable that the the idea of teething fevers became popular. “Teething is often blamed for fevers that are from a concurrent illness, which is common for children at this age,” explains Dr. Mollie Grow, a pediatrician at Seattle Children’s. “This is one of those “true, true, and unrelated“ situations. Fevers and teething both happen often enough they are confused as being related.”

Can a baby or toddler have an elevated temperature from teething?

OK, so if your baby has a true fever, we know that this is not caused by teething and rather you’re probably dealing with a virus. Or — lucky you — a virus and teething. But what if your baby or toddler is simply running a bit warm, but doesn’t technically have that 100.4 temperature? Could that be caused by teething? “Mild temperature elevation has been reported in many studies,” Grow tells Romper. “However, one of the challenges is that often these are based on caregiver questionnaires. We think that there is some bias for parents to report an elevated temperature, even if this may not be directly related to the teething symptoms.”

Why do baby’s cheeks flush with teething?

We’ve all been there — you get Baby up from a nap and suddenly you realize that those sweet cheeks are unusually flushed and red. You check their temperature and it’s normal — or at least, not a fever. But they’re flushed and maybe even a little fussy. Could that be teething? Well, this is yet another tricky symptoms that may or may not be attributable to teething. “This may be another symptom that is not directly related to teething,” suggests Grow. “If they have a fever for another reason, that may be the cause. Mild temperature elevation may also cause the cheeks to flush. Another possibility is for drool to cause a rash around the mouth or cheeks.”

“Flushed cheeks can occur from drooling that causes irritation,” says DiPietro. “You can treat this by cleaning the cheeks with warm water and applying a barrier such as Vaseline or Aquaphor to the cheeks.”

“Teething does not cause more body-wide symptoms, such as diarrhea, vomiting, cough, congested nose, body rash, or a fever,” Grow adds, encouraging parents to take care not to attribute too many symptoms to teething.

How long do symptoms of teething last?

Studies have found that the teething process typically takes about a week, though will vary a bit from child to child.This includes about four days before the tooth actually erupts through the gums, and about three days following the tooth coming through. So if you notice teething symptoms, expect about a week of disruption — perhaps some fussiness or extra drooling — but nothing too intense. “Most children get teeth between six and 30 months of age, some may start later,” Grow explains. “Because there are 20 primary teeth, one statistic cited is that they have an average of one tooth per month in those ages. However, since most teeth come in pairs, and sometimes in fours, there tend to be more discrete times when teething is actually occurring.”

If your child is teething, take heart that it won’t last forever. And if your baby has a fever, unfortunately you can’t write it off as just a teething fever. If you’re ever concerned — whether by normal symptoms of teething or because your baby is sick — it’s always a good idea to contact your pediatrician for guidance and advice. And either way, before you know it, your baby will surely be themselves again.