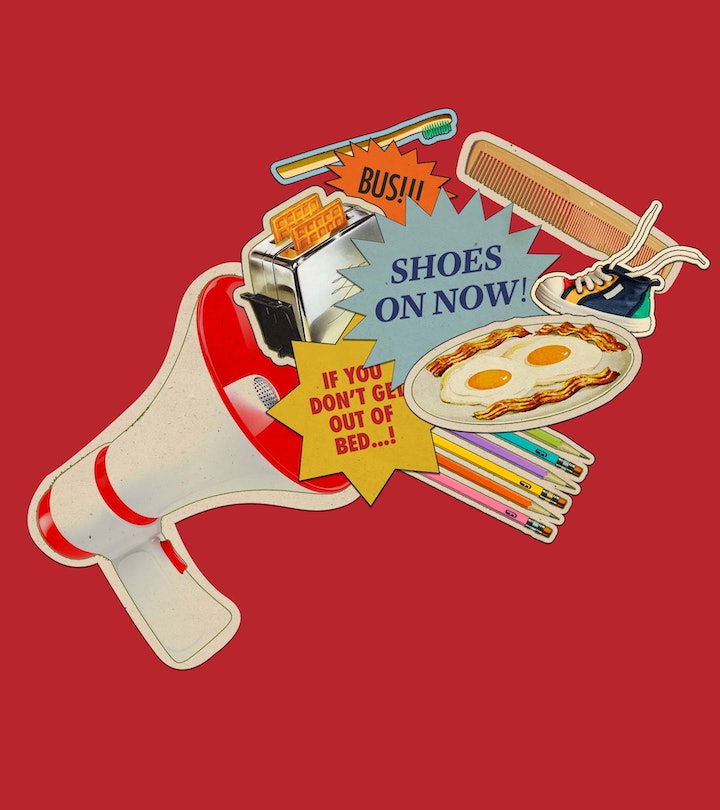 The Morning Rush Is Parenting At Its Most Essential

There is no hero’s journey in this particular labor of mothering — or if there is, you are definitely not the protagonist.

by Angela Garbes
Aug. 10, 2022
Sponsored
The Back To School Issue

I get nostalgic for summer well before its end. While every week is different, each with its own particular rhythms — mostly morning camps and afternoon play dates with a rotating cast of friends and neighbors — I let myself give into the season’s languid pace. I sunbathe topless on our patio and take rare, indulgent 20-minute morning showers. Who cares if my little one gets to preschool late today, tomorrow? Why not let the kids watch a movie and stay up late, seeing as the sun doesn't set until 10 p.m.? What’s the harm, really, of having three popsicles every day?

By late August, though, my carefree attitude dips below the horizon. I relieve our 4-year-old of her duties as the early riser of the family and get up just before the sun does. I use the hour or so of quiet to drink coffee and try to write. A desire to reflect, to be of mild use, stirs inside of me. It’s been over two decades since I was in any kind of school, but back-to-school season still has a hold on me. I want to be ready for what comes next, to steady myself for fall, for all the logistical hassles and the return of that most elemental of school routines: the morning rush.

When my girls were babies and toddlers, morning routines were a chaotic swirl of feeding, wiping, diapering, dressing them and redressing them, stirring oatmeal before it burned, and getting their shoes to stay on. Now my daughters have breakfast requests (an everything bagel for one, cinnamon raisin for the other) and feedback on the menu (“Waffles AGAIN?”). They have folders to account for, lunches to pack, backpacks to zip, and preferred KF94 masks to track down. As they get older, the details of our morning routine change, but the inanity is constant. My children have no sense of urgency; they barely possess a sense of time, even though they can read a clock and loudly call out the time, unprompted. Most days it seems I am actually pushing their tushes out the door with my hand or knee, physically willing them out of the house. Every few months I marvel at how much they have grown and matured... and how I basically still have to do everything for them.

I walk the nine circles of wardrobe negotiation hell all while fielding my older daughter’s questions about the seven-day weather forecast, if I have any goals for how many books I want to write while I’m alive, why giraffe tongues are black...

I was an ‘80s latchkey kid. Because both my parents worked full time, my brothers and I took the bus home on weekdays and spent hours unsupervised, roaming the woods in the back of our house but mostly snacking and watching television — Kate & Allie, Growing Pains, and the iconic U.S. Army recruiting ads of the era: “We do more before 9 a.m. than most people do all day.”

I ponder this relic of my childhood as I gently cajole (then eventually yell at) my child to put on shoes, No, shoes that fit, not her older sister’s shoes. Shoe drama comes after I firmly tell her that she must wear underwear; after I suggest to both of them to maybe not wear black thermal pants on a 90-degree day or a sleeveless dress on a 40-degree day (seasons change, but their aversion to weather-appropriate clothing does not). I walk the nine circles of wardrobe negotiation hell all while fielding my older daughter’s questions about the seven-day weather forecast, if I have any goals for how many books I want to write while I’m alive, why giraffe tongues are black, and enduring yet another explanation of the Dragonette Prophecy from the Wings of Fire graphic novels (not that I asked). I contemplate exactly what percentage of my parenting — 27%? 44%? — is just me nodding and saying “Oh yeah? Cool.”

When they are finally out of the house, I am typically overcome with the desire to get back in bed (or just lie down on the living room carpet). Memories from my TV-addled childhood enter my brain and I think: the Army’s got f*cking nothing on me. Some days I feel I have actually gone to war.

The morning routine is Groundhog Day: every morning a repetitive circle of waking to action — the alarm is a child screaming and what follows is a blur of toothpaste, tears, maple syrup, shoelaces, and mugs of coffee abandoned amid all the tending, gone cold on the counter.

Our society values production, novelty, progress, hustle (and side hustles), and, once we’ve offloaded our children to other people, weary and numb, we are then expected to get to work.

The routine is always the same, even when it’s different. It stultifies the brain, makes it easy to disassociate at the breakfast table, to float away as Cheerios are thrown on the floor and a small person talks endlessly about how Ezra or Rainer or Ada fell off the monkey bars and by the way have you seen my hard bone shin bruise?

There is no hero’s journey in this particular labor of mothering — or maybe there is, but you are definitely not the protagonist. Our society values production, novelty, progress, hustle (and side hustles), and, once we’ve offloaded our children to other people, weary and numb, we are then expected to get to work.

The labor of parenting is, by nature, the opposite of productive work. It is maintenance and nurturing, tending to our inconvenient bodies, the developing minds and unpredictable whims of our small, vulnerable, and tender offspring.

Taking care of children may feel like drudgery — and, fair, it often is — but I know that the repetitive circle we walk every morning wears a groove into their consciousness, their souls. It is precisely this intimate, bodily knowledge — specific to each child, cultivated day by day — that gives them a sense of security, safety, and love. We feel like we are going nowhere, but time marches forward whether we notice or not, so imperceptibly that it can feel like a betrayal.

To think, eight years ago, the baby who made me a mother and I began each day with a diaper change and a cuddle. We nursed. We lolled on the carpet, our faces inches apart, amid stuffies and textured, jingly toys. Five years ago, I sat patiently on the floor of her bedroom floor every morning for six months as she poked just her face through the neckhole of every shirt, sweater, and dress, then roared and shouted “I’m a lion! I’m a lion!” and ran around the room in circles with seemingly no memory of ever doing it before.

This year, that baby is a second grader who can scramble eggs, toast a bagel and schmear it with cream cheese, and make herself a peanut butter and jelly sandwich. This year, that baby will walk to elementary school on her own or with her friends, just a few blocks south through the park. I joke that she won’t actually be alone, that I’ll be watching her from behind one of the sturdy oaks or Douglas firs, making sure she arrives safely. But in reality I’ll be at home, trying out a new routine that I suspect I'll be cultivating for decades to come: letting go.