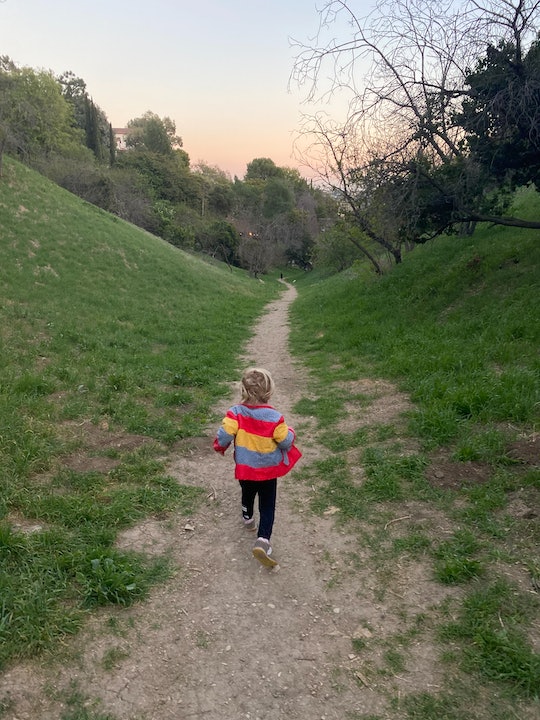 The Reckless Love Of Foster Parenting

Mothering this way has taught me that no amount of love can make the beloved become “yours.” Your reward is the time spent in their presence, the ability to bear witness to their growth. That’s the gift.

Three days before Christmas, two years ago now, I stood at a massive industrial hospital sink, scrubbing my hands and arms until the light above the sink switched from red to green, alerting me that I'd reached the allotted time. As the suds gushed around my fingers, I instinctively wiggled to the bad contemporary holiday music wafting over from the nurse’s station. I was so nervous I was already sweating through my festive turtleneck and velvet pants.

Appropriately scrubbed, I was ushered through the NICU double doors, where I looked around, clammy with nerves, searching.

Which one was my daughter this time?

From the time I was a child, I only imagined becoming a mother through adoption. My husband was adamant about trying for a biological child, too, so we decided to try to conceive our first, and adopt our second. I was 6 weeks postpartum with our son when I began looking into adoption.

I knew the adoption process could take a long time, and I wanted our kids to be close in age, to give them a chance at best-friendship, at going through childhood in tandem with one another. I grew up an only child, so the romance of siblinghood was never far from my thoughts. A…built-in best friend? What could be better?

While I stood in the NICU, a nurse took my name and led me to a baby sleeping peacefully in a plastic bassinet, her hands blocking her face, like it was all too bright. “Here she is,” the nurse introduced us.

She was ours — not to have, but to love.

I gently offered my hand to her littler, softer one. She had lived on oxygen in this plastic bassinet, mostly alone, for two weeks, trying to get her tiny organs adjusted to being outside the womb seven weeks premature. My stomach churned with wonder. She had tiny dark circles under her eyes, already weary from all she had witnessed.

Less than one month earlier, I had been at another hospital to pick up a different foster baby who had been removed for drug exposure in utero. The foster agency warned us that, in all likelihood, the child would be rejoined with her biological family, but my husband and I quickly agreed to welcome this little person with open arms into our home, for as long as she needed it. That wound up being exactly 2 weeks to the day, when the judge ordered F be reunified with her father.

DCFS was supposed to pick her up and take her to her father, but our caseworker called and informed us she wasn’t allowed any overtime and it was now my responsibility to take her to a local McDonald’s parking lot and hand her over to her biological father myself. New and naïve to the system, I agreed, walking to our local Mickey D’s late that night, smelling F’s hair for the last time, caressing her perfect cheeks. Her father and I walked towards each other slowly beneath the floodlights. He was sheepish, I was despondent. They had the same nose. I walked back home crying, with an empty baby carrier strapped to my chest.

On any given day in the United States, over 420,000 children are in foster care — 33,000 in Los Angeles alone. Many of them languish in the system until they age out at 18. Biological parents are assigned a caseworker and given free transportation and free rehabilitation services so that they are able to turn their lives and paths around in order to care for their children. They have a minimum of six months to prove effort, but after an adulthood of drug addiction or a childhood where they themselves were subject to merciless abuse, this often proves to be far too little time.

Children are placed in the child welfare system for several crises: parental drug or alcohol abuse, physical abuse, neglect. When I sat down at orientation for training to become a Resource Parent, I told my husband that my only requirement was that we don’t take a baby exposed to drugs. I didn’t have any real reason other than general fear and a George Bush Senior-era childhood immersed in the D.A.R.E. regime. I hadn’t investigated what it really meant, or what the real effects were. When I raised my hand in orientation and asked what percentage of foster babies were exposed to drugs, I was told, plainly, “about 95%.” My jaw dropped.

Once I started looking into the effects of drugs on children, I became a lot less afraid, and a lot less resolute in my prejudice.

And yet, I’d do it all again a million times over, for the chance to love her.

Half of all children who enter foster care are reunified with their biological parents. Around 7% go to live with relatives, 10% with family or kin, and the rest remain in group homes or are adopted by their Resource (Foster) Families.

The system is designed to be as emotionally remote as possible to accomplish the tasks at hand, which feels in stark relief from its stated mission: to help children and families in crisis. It’s a wretched and deeply vital institution where no one wins, where cerebral bruises are imprinted in the wake of court hearings, leaving invisible welts in the biological families, the children, the foster parents, and the caseworkers, too.

Training spends a lot of time preparing you for this journey, but there’s truly nothing that can prepare you for the calls from desperate mothers, the pit in your stomach every time DCFS comes by, that today might be the day they call and say she’s going home. The other home. And yet, I’d do it all again a million times over, for the chance to love her.

Less than two weeks after that night under the streetlamps at McDonald's, I received a message from Hanah, a woman in my private Facebook mom group. I had never met her, but she and I and 198 other mothers had shared intimate details of our lives online for the past two years of motherhood. I had told the group about my devastating parting with F, which Hanah then shared with her best friend who worked at DCFS. Days later, that friend called Hanah alerting her that she did intake on a newborn who was now in the DCFS system and had a good chance for adoption given the circumstances surrounding her biological parents and family history.

There have been endless visits from DCFS, bi-weekly visits from our agency, endless doctor’s appointments, court dates, endless worrying that she would be removed from our home, endless joy, endless kisses.

I sat, blinking at my phone, and immediately called my husband. We had just decided to put our foster journey on hold, to try and catch our breath, but here was this new baby, flying into our lives out of left field. We were given minutes to decide (when resource parents receive a call about a baby, they have about 10 minutes to decide before the caseworkers move down the line to the next potential family), but we both knew immediately that our answer was going to be yes.

You have to be a little reckless, to love this way, but after a morning spent at a foster agency orientation, I was convinced this was the right avenue for us to grow our family. These were the children that needed us most of all. A major part of parenting is learning to relinquish a certain amount of control over your child’s story, and as a foster parent, ever more so. You can’t control how they were handled or treated before they found their way to you, but once they’re in your care, all you can do is advocate for them fiercely, tirelessly.

The next day, we drove to that hospital in Long Beach to scrub in and meet our new daughter, Z. It’s been two and a half years since we took Z home with us that day. There have been endless visits from DCFS, bi-weekly visits from our agency, endless doctor’s appointments, court dates, endless worrying that she would be removed from our home, endless joy, endless kisses.

Foster parenting taught me that no amount of love can make the beloved become “yours.” Your reward is the time spent in their presence, the ability to bear witness to their growth. That’s the gift. The currency exchange for my devotion to and affection for F, and now for Z, has gifted me with the most beautiful two and a half years watching her blossom into the kind of creature that takes people’s breath away.

She holds onto anyone she meets, like a tiny koala. Embraces them with the total trust of a friend. Giggles into their neck: she is everyone’s co-conspirator. She has wild hair and her laugh holds the timbre of an inappropriate affection for Marlboros and most of all she likes to pat your hand and say, “Are you happy?”

In Togo, the twin born last is considered the oldest. This is because they are seen as wise enough to stay behind and send the other one out to see if the world is worth it. Cosmically, I believe Z made her way to me in the exact right time for us to get that call. She was wise beyond her minutes. She was ours — not to have, but to love. And I have fought tooth and nail for her from that first moment with her, sweating in my green velvet pants, rocking her to the discordant cacophony of respirators and monitors, our hearts beating against one another’s chests, strangers no more.