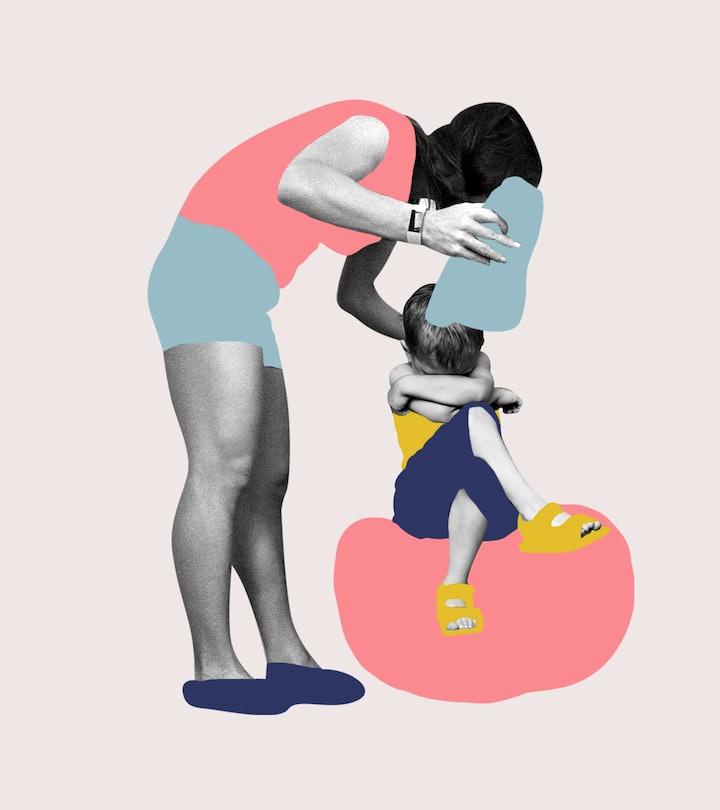 Back to school, back to the power struggle?

Before he turned 3, my son would put on pretty much anything – jeans, tiny Hawaiian shirts, and even, just once, an adorable pair of denim overalls. Those were the days. Now that he’s nearly 4, he refuses to wear anything except his blue “up pants” (aka shorts), a “running shirt” (aka a sleeveless T-shirt), his “Spork socks” (socks with the Forky character from Toy Story) and T-Rex tennis shoes. I have tried to expand his sartorial mind, but the kid has not budged. And because I’m not cool with doing laundry every single day, or with having a kid who runs around in shorts that have five day old ice cream and spaghetti and dirt stains all over them, the clothes battle has become a daily one between my son and me. A battle I tended to lose.

For months I’ve attempted to coax or bribe or discuss, but as many parents who have dealt with children who have unbending opinions about what they put on their bodies understand, this battle is not for the weak.

For some parents of young kids, picking out clothes might be a carefree, stress-free experience. For others, it can be pretty much a living hell. And with back to school season upon us, during a time when many kids and parents haven’t walked into an actual classroom in 18 months, a struggle over shorts or socks just adds to the stress of an already fraught situation.

For some parents of young kids, picking out clothes might be a carefree, stress-free experience. For others, it can be pretty much a living hell.

Claire Lerner is a licensed clinical social worker specializing in child development, and the author of the upcoming book Why Is My Child in Charge? A Roadmap to End Power Struggles, Increase Cooperation, and Find Joy in Parenting Young Children. She says kids can have “clothing jags,” where they get hooked on certain things (similar to when they have a “food jag” and will only eat blue food or buttered noodles or pickle slices) and that parenting through these phases can sometimes require Herculean patience.

Around ages three and four, Lerner says kids develop “an increasingly complex understanding of personhood,” becoming clearer about who they are and what they want. “They’re not doing it to drive you crazy,” Lerner says of the steadfast devotion to things like blue “up pants."

Maybe not, but when you’re trying to explain to a red-faced toddler why they can’t wear the same pair of pants 365 days a year, it kind of does feel like they’re trying to drive you crazy. It also probably doesn’t help that I keep asking my kid to wear other clothes. I can spot a rebellion when I see one.

Lerner and other experts, like Stephanie Irby Coard, Ph.D., associate professor of human development and family studies at the University of North Carolina Greensboro, advise parents to make sure your child’s preferences aren’t coming from a deeper sensory issue that’s truly causing emotional and physical discomfort, rather than from a preference. In the former case, seeking out help from an expert would be key.

“Issues around clothing speak to levels of comfort for children,” Dr. Coard says. “If you take that, combined with the fact that kids are starting to want to have a certain level of mastery over their environment and bodies and belongings, it makes sense.”

When I was worn out from battling my son about his running shirts and those damn blue shorts, it helped to commiserate with other parents who had gone through similar battles with their kids. Online, I find myself hitting like on everything from “My daughter would only wear dresses, no tags, and it needed lining” to “My little one was no labels, socks couldn’t have a string across the toe, nothing tight around the waist and no shoe laces” to my favorite: “At least your son wears clothes.”

Claire Borger, 45, a producer in Jamaica Plain, Massachusetts, says her nearly 4-year-old daughter Hanna has been in a naked phase for almost a year. That phase includes mooning her grandparents whenever they FaceTime. Hanna also has an opposite penchant for picking heavy winter clothing during the hottest summer days. Borger told Hanna she could wear the heavy coat and pants and two pairs of socks until it was time to go to school, and then she would pack the winter gear in Hanna’s backpack for school if she agreed to wear clothes that wouldn’t make her pass out in the heat. “Miraculously, it worked,” Borger says.

Giving Hanna choices between what to wear also helps — sometimes. Borger and her husband try to balance letting Hanna be herself and not feel ashamed of her body with getting her into clothes for school, but it’s not always easy. “I try, but what can you do?” Borger tells me.

“I am constantly told I shouldn't let him out of the house, even in the front yard, in just his underwear. But honestly, it just doesn't matter all that much to me and it saves me time and energy to just let it go.”

Aimee Bonin, 42, mom of two kids, ages four and six, says her son has been in a constant state of wearing underwear only for most of his life. When I asked her how she handles it, and how she tries to talk to him about his clothing choices, she just says, “I don’t.”

“Don't let others influence your parenting decisions,” she adds. “I am constantly told I shouldn't let him out of the house, even in the front yard, in just his underwear. But honestly, it just doesn't matter all that much to me and it saves me time and energy to just let it go.”

Not all parents are so easy-going about their kids' clothing jags, though, and it’s not always simple to navigate those battles.

“Don’t get into a power struggle,” advises Lerner — meaning don’t bribe or negotiate. She suggests giving choices, but also talking to the kid in question and asking them why they only like certain clothes (or no clothes). At least this way you can understand, instead of fight against, their habits. “Acknowledge and validate their point of view and give them choices,” Lerner says, but she also adds that it’s important not to let your child take complete charge. You have to show them that in life, you can’t always wear exactly what you want. Most adults don’t wear bathrobes to the office — depending on where you work, I guess.

I’ve tried all of the suggested tactics with my son. I’ve given choices, let him pick outfits, asked him why he only loves his blue “up pants.” His answer? “Because they give me energy and make me run faster.” It was tough to argue with that one. Maybe they do give him energy? I can’t prove that they don’t.

I’ve tried telling my son that another pair of grey shorts were “skateboard shorts” since he’s obsessed with skateboarding, and that trick actually worked, for a day. Another time I told him that his cousin Jake gave him a bright green T-shirt, hoping that since he worships Jake, he’d ditch the running shirts and put it on. He eyed the shirt for a moment, sizing it up and probably trying to decide whether or not he was being conned. No such luck with that one. It was another day, another running shirt.

Dr. Coard says that one of her own kids went through a phase where they insisted on wearing two different, mismatched shoes every day. “I was like OK, at least you have two shoes on,” she says. “Ask yourself if it’s a battle worth fighting... If your kids are safe and comfortable, it just might not be a big deal.”

Like Lerner, Dr. Coard suggests listening to your child so you can understand their preferences, giving them choices, understanding that their discomforts are real, and then, finally, choosing your battles. “Allow the child to work through it,” she says. “If a child is feeling pressure to wear something or make a choice quickly, it can just make it worse.”

So as a new school year begins, I will embrace the blue “up pants” and running shirts, and save myself the angst of trying to force my kid to put on something that he just doesn’t want to wear because apparently this particular outfit gives him energy. And why, at the end of the day, would I argue with that? At least he’s taking baths. For now.