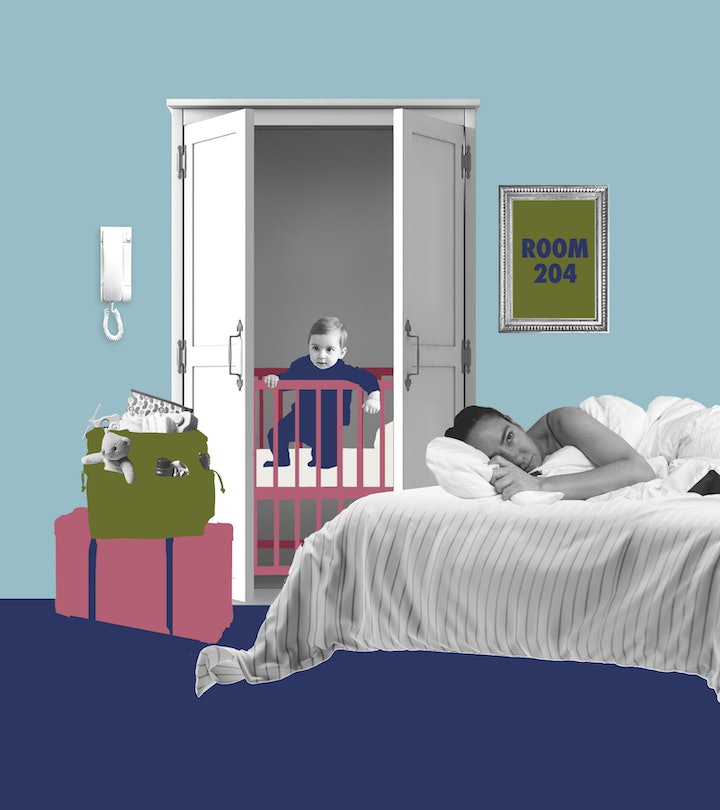 When I Travel, My Baby Sleeps In The Hotel Closet

Parents who travel share a guilty secret: They stash their babies in bathrooms, shower stalls, and other dark hotel room nooks.

For the past five years, before reserving a hotel room to share with my now 5-year-old and 2-year-old, I have always called the front desk to ask a few questions about the room I’m about to book. “What’s the square footage of the closet?” “Do you have the dimensions of the bathroom?” (They can only find the answer about half of the time, and when they promise to get back to me, I know it will be a dead end.)

I’ve learned to ask these things in a nonchalant tone, as if I am the kind of bougie traveler who simply needs ample closet space and a spacious restroom at a Comfort Inn. I do not reveal what I really want to know: whether I can fit my child’s Pack ’n Play or child cot in that closet or that bathroom, or even in the shower stall. Because the few times that I did reveal my real agenda, the person on the other end of the line switched their tone to thinly veiled horror.

I knew what they were thinking: Who the hell would put a baby in a closet? That seems dangerous — or at least fishy. But they don’t know my toddler, a child who thinks they deserve to attend a rave if they see a single person in their line of sight during bedtime.

I am also not alone in stowing my babies and toddlers away in the darkest, quietest spaces in hotels in order to get — and to give — a good night’s sleep.

And I can’t exactly book my kids another hotel room to shield them from the sounds and sights of the rest of our family after 8 p.m. Putting aside the exorbitant cost of two hotel rooms these days, I can’t leave my infant, or really any pre-teen child, in a locked room on their own. (And adjoining rooms are rarer than you think.)

That leaves the closet or the bathroom. Before you get nervous, let me preface this with the caveats: I make sure the space is well-ventilated, I crack the door. I take out the hangers. Sometimes I even bring my own nightlights. I am not a monster!

The first time we put my oldest to sleep in a large shower stall was after trying to put him down in the hotel room for hours in vain. Being a coddled first child, he was quite particular about complete silence and darkness when he slept, and the hotel room provided neither of these things. We put the travel crib in the shower, and he conked out in minutes. I was convinced that I was creating some sort of ingrained trauma that would stick with him for the rest of his life. He would forever avoid showering. I was gripped by insomnia, Googling showers and mold and asthma as he slept soundly through the night. Meanwhile, my husband thought this was a perfect solution — and also slept through the night.

I didn’t dare mention it to anyone. And yet despite the guilt, I did it again. And again and again.

By the time he was 1, my son had slept in many closets and bathrooms around the world as I continued to travel for editorial work and an entire book tour. That was when I finally dared to ask my pediatrician if I was the worst mother on the planet. She laughed right in my face, a real snort of a guffaw, and told me she’s been putting her own kids in hotel closets since the early ’90s. They all attended perfectly acceptable colleges and all of them take regular showers.

I trust my pediatrician completely, but parenting has changed a lot since the ’90s, when I was allowed to ride in the way-back of a station wagon and eat candy shaped like cigarettes. So I checked with another pediatrician. “It can be safe, depending on a couple of factors,” Dr. Florence Segura told me. “For older babies and toddlers, you need to ensure temperature control in the bathroom or large closet to allow good airflow and avoid overheating. I would advise leaving the door ajar and not completely closed for this reason.” She also recommended checking for safety hazards like hangers, locks on the inside of the bathroom door, and accessible cords on blinds, hairdryers, and razors that kids can become tangled in.

This felt like common sense and also offered me the reassurance I need as I’m embarking on yet another pregnancy and entering the daunting world of a three-child family. As many of my friends have told me time and time again, the world — and particularly the world of travel — is not built for families of five.

I am also not alone in stowing my babies and toddlers away in the darkest, quietest spaces in hotels in order to get — and to give — a good night’s sleep. I know one mom who goes further than calling the front desk: She has emailed hotels and resorts to ask for an actual floor plan. “It helped me better determine the layout of a room so I could find a spot to stash the crib, and it has prevented me from getting an extra room because I could better understand where I would put the baby,” Taryn Berkett told me. “Sometimes I would pack extra swaddles, cloth black-out blinds, and binder clips, and would MacGyver a situation up.” Her other tip? Right before a trip, call and ask whether the ADA-compliant rooms had been booked for your stay, and if they haven’t, ask to switch to that room because there is generally more square footage and the bathroom is bigger, which equals more spaces for putting a crib.

Sure, a nice kids’ club is great, but when you have babies, you just want a fridge with good storage for breast milk.

Another friend of mine, longtime travel journalist Regan Stephens, knows a lot about hotels. In fact, she’s one of the most knowledgeable travel experts I’ve ever talked to and one of my go-tos for family travel advice, since she has three girls under the age of 10. She told me that she has put her kids in a closet or bathroom every time she traveled with one of the three of them under the age of 2.

She remembers one no-frills “boutique” hotel in Brooklyn in particular. “The rooms were tiny. But they had an outsized bathroom, so when it was bedtime, we’d put the Bjorn travel crib in there. It made getting up to pee in the middle of the night feel like a high-wire act but worth it,” Stephens says. “I also remember walking into the Four Seasons Philadelphia after my girls were out of a crib, and feeling a pang of sadness that we wouldn’t get to use the cavernous closet as the baby’s room. I can’t unsee the potential of closets and bathrooms, even a few years out of the crib stage.”

I wish more hotels would provide the information that actually makes their rooms family friendly. Sure, a nice kids’ club is great, but when you have babies, you just want a fridge with good storage, not a minibar that charges me a grand when I try to empty it of all the booze to put away my breast milk. I’d love a microwave so I don’t need to pay for a bunch of restaurant meals my kids won’t eat anyway, and I want to know if I can fit my child in their closets so that everyone can get a good night’s sleep. Is that too much to ask of a hotel website?

“I imagine the people who market the rooms aren’t parents,” Stephens says when I ask her why hotels don’t market themselves a little better to parents. “Or maybe it feels unseemly to say, ‘Choose our hotel, we have the biggest closets you can shove your baby into and you’ll all get more sleep.’”

Unseemly is one way to look at it — empowering for parents is another.

More Like This
Tips to Beat Jet Lag, For You & Your Kids
The Best Travel Tips For Solo Parenting
Sex & The Single Mom: Grieving Divorce
Julia Fox's Apartment Tour Made My Nipple Hairs Stand On End
What Parents Are Talking About — Delivered Straight To Your Inbox