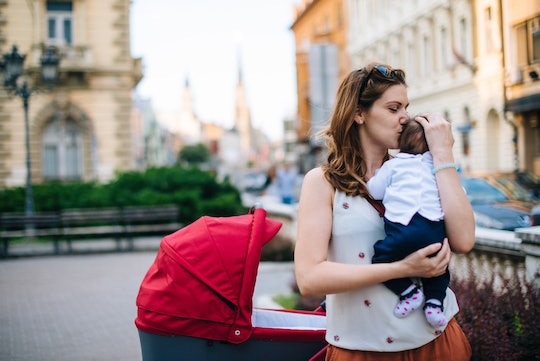 I’m An American Raising My Baby Abroad — There Are Definite Tradeoffs, But At Least There’s Healthcare

My time as a working mother in Germany has underscored how urgently the US needs better policies for parents, but also that policy alone won’t be enough.

Even before I knew I wanted to have children, I knew I wouldn't be able to afford to raise them in the U.S. At least not as babies. So when it came time and I got pregnant three years into what was meant to be a temporary stay in Germany, I felt like I had no other choice but to have my kid here.

I was 4,000 miles and an ocean away from any family, but at least I had maternity leave. At least my prenatal check-ups, my labor and delivery, my kid's well-baby pediatrician visits and vaccines, and all other medical costs would be covered in their entirety.

If parenting is a series of trade-offs, the compromises I made by having my daughter in Germany have felt like impossible choices. Did I want my mother in the delivery room with me or did I want to be paid for maternity leave that included six weeks before and eight weeks after delivery?

The answer the German state gave me was that a midwife would make house calls every day for the baby's first few weeks of life, essentially replacing anything a grandmother might do to help in those early days. Besides, my mother was still years off from retirement; she had just 10 days of vacation each year to look after me and the baby.

The uneasy decisions persisted. Did I want to be paid to stay at home for the first year of my child's life (at just two-thirds my salary, but still, paid) in Germany or did I want to go back to the U.S. and hand over the majority of my paycheck to a day care?

It wasn't as if I had a job in Germany that I might have returned to after those first 12 months. Theoretically, I should have been granted up to three years of family leave post-birth. In reality, I had been asked, non-negotiably, to forfeit my position as a university lecturer after I'd revealed my pregnancy. (Although it's technically illegal to fire someone for having children, it's not forbidden to simply not renew their employment contract.) Again, I compromised, agreeing to spend her first year in Germany before returning to the U.S. and its unsubsidized child care.

That plan fell apart when my marriage did, even before my child's first birthday. Returning to the U.S. had relied not only on my finding a day care spot and a well-paying job but also on the economic privilege of being in a two-income marriage. With no way to pay both rent and child care in the U.S., I stayed on in Germany.

Now, more than a decade into parenting here, it's clear to me that, although progress has come in the form of seemingly family-friendly policies, this is no country for women, young or old.

Raising a child in a culture not my own could be adventurous, I told myself. She would be bilingual, bicultural, at home between two worlds. And I had believed everything I'd read about Germany in the U.S. media; with a female chancellor in charge, I certainly expected it to have feminist policies.

Now, more than a decade into parenting here, it's clear to me that, although progress has come in the form of seemingly family-friendly policies, this is no country for women, young or old. Although many of the state's policies toward children appear enviable to parents in the U.S., they are often based on structures scaffolded by heteronormative nuclear families with traditional gender roles.

Take family leave, for example, which is equally accessible to mothers and fathers of children under the age of 6 (though just the first 14 months are paid). In 2019, the number of fathers taking leave doubled to a whopping 1.6% of working men with children under the age of 6. Though there's some discussion about why so few fathers take leave, most modern couples I know make the choice that the lesser earner stays home that first year as the allowance paid by the government caps out at 1,800 Euros per month.

Of course, as in most other Western countries, that lower earner is nearly always the woman: 90% of women in Germany earn a net income of less than 2000 Euros per month (not enough to live on in any major city). Having a child here will not even make a dent in a man's income but it will bottom out your earnings if you're a woman — 10 years on, the average mother's earnings will not have recovered to the level of what they were pre-child.

Until 1977, women in western Germany still needed their husband’s permission to work outside the home; even after the law changed, the cultural expectation did not.

It can be easy for an American like me to forget about these monetary disadvantages when there are other social supports that make life easier. In Germany, we have sliding-scale income-based child care and are guaranteed a spot for children between the ages of 3 and 6. In Cologne, where I live, the monthly costs for a full-time public day care spot max out at around 500 Euros for top earners. (In Berlin and the former east, it's subsidized even further, making child care nearly free for everybody.)

As a newly single mom on a very fixed income, this access to reliable child care felt like a lifesaver, even if I couldn't find a full-time job to work doing those hours. Because, while I can't financially afford to work anything less than a full-time job, I've found it impossible to find an employer interested in accommodating my need to leave by 3:30 each day to meet the 4:30 final pick-up time. I've been told in interviews (by fellow mothers who would be my superiors) that certain positions were not open to people with young children because they required shift work or were too stressful or demanded spontaneous business trips.

I may have been naive in a lot of ways about what it meant to raise my child in Germany, but as the daughter and granddaughter of distinctly not-hausfrau women, I never even considered that being a parent would put me at such a disadvantage on the labor market. Not with a Master's degree and language fluency.

Yet in Germany, just one-third of women with children at home work full-time. (In the U.S., two-thirds do). I don't know any middle-class moms who returned to working full-time after having children. Even teachers, whose in-class schedules matched their children's, or doctors and lawyers with their own practices, maintain shorter working weeks. These remarkably successful women all rely on their mothers, who had often themselves been stay-at-home moms, to look after the children.

As great as some of the policies we have in place are — and I think every single parent should be given the gift of subsidized child care and universal health insurance — they can't make up for the losses that arise for women when men don’t pull their own weight.

Until 1977, women in western Germany still needed their husband’s permission to work outside the home; even after the law changed, the cultural expectation did not.

The rest of us use patchwork child care and exchange play dates with each other, alternating whose house the children will play at once school closes. The majority of fathers aren't chipping in in the way many moms of my generation had hoped. Even the standard visitation agreements reflect that dynamic of men being the breadwinner — fathers are given alternating weekends that begin Friday afternoon and end Sunday evening. Moms are entirely responsible for the bulk of the rest of the weekday child care and work.

As great as some of the policies we have in place are — and I think every single parent should be given the gift of subsidized child care and universal health insurance — they can't make up for the losses that arise for women when men don’t pull their own weight.

Though we’ve had a woman as chancellor for the entirety of my time in Germany, gender equity still feels like a pipe dream. Merkel’s family ministers (all of whom have been women) may have made contemporary child-rearing a bit easier for parents today but it’s still not enough. I’ve learned while living here that a government policy can't resolve every issue if that society isn’t willing to reflect on its own misogyny.

To make parenting a more viable option in both the U.S. and in Germany, there needs to be a societal sea change, one in which children and their parents are valued and invested in — financially and emotionally.

With the pandemic not quite behind us yet in Germany and the election for the chancellery — and Angela Merkel’s successor — coming soon, the role of the family has become a highly contentious political issue. School and day care closures have decimated the already-volatile careers and earnings of most mothers in Germany over the last year and I have seen no plan to gain those losses back.

To make parenting a more viable option in both the U.S. and in Germany, there needs to be a societal sea change, one in which children and their parents are valued and invested in, both financially and emotionally. So far, Germany’s politicians have shown no signs of interest in doing so.

As one dad rather harshly said to me before the pandemic even hit, our children are the first generation in Germany to be seen as individuals with their own needs and not raised simply as cannon fodder; it is up to us, then, as parents to change things for them, both politically and culturally.