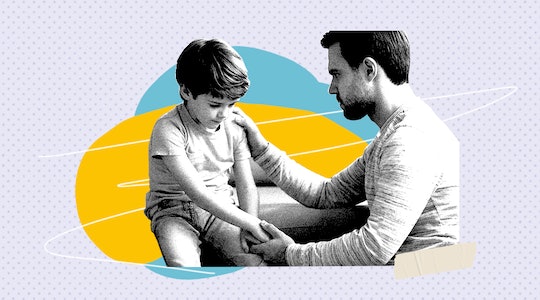 What To Do When Your Child Says Something Racially Insensitive

Parenting is a weird balancing act. You’re supposed to guide these completely blank slates into society, teach them to have pride in who they are, but also help them remember that other people share their spaces and need to be treated with sensitivity, too. In a perfect world, this would be gentle, comfortable, and easy.

Sure, that world sounds nice. But the reality is, it doesn’t exist.

Instead, kids are prone to blurting things out that are awkward or embarrassing — things that make you (and others) cringe harder than pre-parenthood you knew was possible. And very few moments are more completely mortifying than a sudden out-of-place comment about someone else’s race or culture.

Luckily, we’re all stumbling through this trying-to-raise-kids-right thing together, so you’re not expected to handle it perfectly — or alone. You can, however, arm yourself with the right information and behaviors to help you respond appropriately and constructively. According to Mary Garvey, director of Innovation and Inclusion at the Institute for Child Success, failing to address racial bias in the moment can be immensely harmful to kids: “When people don’t speak about race, it’s much easier to see others as bad just because they’re different. Everyone sees color, so we need to help our kids understand how to react to differences when they notice them.”

So next time your kid says something in public (at full volume, no less) that could be interpreted as harmful to someone else, take a deep breath and follow the below guidelines to transform that cringe-y moment into a teachable one.

You may be tempted to go the easier route and change the subject in an attempt to distract from the moment, but this is far from the best way to handle your embarrassment. Remember that children are generally trying to understand the world around them, and that diversity is something that people often don’t talk openly about. This means that kids are bound to make some mistakes, but the good news is, as their trusted protector, you’re the best person to help them learn.

“After a child understands what diversity is, it’s the parent’s role to help them become accepting of all diversity,” child psychologist Donna Housman tells Romper.

So what does that look like in real life? In this video, antiracist writer, educator, and activist Dr. Jennifer Harvey advises parents to model the behaviors they want to see in their children. That means responding to a hurtful comment right away, acknowledging the other person (“Yes, that person’s skin does look different from yours”) and correcting the aspect of your kid’s comment that’s wrong (“But it’s just as beautiful, and honey, it’s not polite to point”).

2. Apologize — But Don’t Make It Weird

Saying sorry for an insensitive comment is a good instinct, but try not to over-apologize, yell at your child, or fall into ‘begging for forgiveness’ territory. Not only could this make your child feel ashamed for what they thought was a simple observation, but it can also make the recipient of the comment feel even more uncomfortable.

Instead, simply apologize once, saying something like: “I don’t know if that comment made you uncomfortable, but I’m sorry.” Then, leave it up to the other person to either accept, or not. It may sting a bit if the other person doesn’t accept the apology or acknowledge your attempts to make right, but keep in mind that you’re setting a positive example for your child.

“We don’t know how that person might respond, and we can’t control that,” says Dr. Harvey. “But we can control how we conduct ourselves.”

3. Continue The Conversation In Private

Once you’re alone again, it’s a good idea to gently delve a bit more into what your child said and, just as important: why they said it. After all, children often say things as an extension of a learned belief, and the best way to ensure something isn’t said again is to correct it at its root.

“When my child says or does something that raises my blood pressure, I remind myself that I want them to constantly be telling me what they’re thinking,” Dr. Harvey tells Romper. “I want them to see me as an ask-able adult.”

Start off with language like, “Hey, I heard you make [this comment] in the grocery store today. I really want to know more about what you were thinking about when you said it.”

And while it might be tempting, don’t use this conversation to assure yourself that your child’s faux pas isn’t your fault. What matters most is guiding them to better behavior, and the way to do this is by keeping an open line of two-way communication going about things they may not fully understand.

4. Get Comfortable With The Discomfort

The only way we’ll move forward in our talks about race is by pushing through the inevitable awkwardness. This means following this same process every time your child says something potentially hurtful. And as hard as it can be, it also means calling these things out when they’re said by friends and family. A simple, “What you just said made me uncomfortable. Could we talk about it?” can go a long away when it comes to modeling good behavior for your kid.

Dr. Y. Joy Harris-Smith, a New York Special Education teacher, lecturer, and co-author of The ABCs of Diversity: Helping Kids (And Ourselves!) Embrace Differences, recommends leaning into feelings of discomfort, and using them as an opportunity to identify where those emotions are coming from.

“Parents who find themselves in [uncomfortable] situations really need to stop for a moment and say, ‘It’s OK. It’s OK if I don’t know. It’s OK if I’m uncomfortable. I need to sit in this discomfort.’” And don’t forget that discomfort is a feeling, and like all feelings, it fades with time.

As Dr. Harvey notes, “The discomfort doesn’t always stay at level 10; the more we [talk about race], the more our discomfort level comes down.” Think of it like a roller coaster ride at an amusement park: the first few times your stomach will flip, you won’t know which way is up, and you might even want to scream. But after the tenth or eleventh ride, you’ll know what to expect and it won’t seem even half as scary. We can all get to that point, but it won’t happen until we buckle in and take that first ride.

Print this worksheet for easy reference.