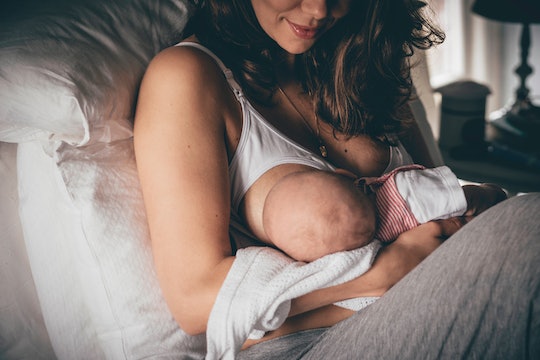 It's super common, especially in those early weeks.

My boobs were hyperactive when I was breastfeeding my babies. Basically, a whisper of a suggestion that they were nearby and hungry — or any baby really — and they would literally react. My boobs would leak breast milk as soon as a baby cried, and let me tell you, this isn't uncommon. In fact, as inconvenient as it is at times, this phenomenon is more than bizarre.

Your Breasts Are Basically Having A Milk Let-Down

“The sound of a baby crying — any baby, not just your own — can trigger what's known as MER, or milk ejection reflex," Kathleen Butler, a lactation consultant (IBCLC) and postpartum doula in Maryland, tells Romper. "This is more commonly known as having a let-down. The actual science part of it occurs when the auditory stimulus of crying causes the lactating person's body to send a signal to the brain that it's milk-making time. Of the two main hormones that produce milk — oxytocin and prolactin — oxytocin is produced more quickly. It causes the myoepithelial cells in the breast that surround the alveoli — the space where the milk is stored — to contract, causing the milk to begin to flow. So it's acting upon the milk that's already there.”

Butler confirms this is a totally normal occurrence, albeit uncomfortable. “Some people can feel when they're about to have a let-down and may experience a kind of buzzing or tingling sensation. For others, there's no warning at all. While it may be inconvenient if it occurs when you're out and away from your baby, it's nothing to be concerned about. Being prepared by using breast pads to absorb any leakage or breast collection shells so as not to waste a precious drop of that liquid gold can be helpful,” she explains.

A study published in Neuropsychopharmacology found that women with the most stable, strong bonds between themselves and their infants experienced a greater than average release of the hormone oxytocin. The article stated, "Mothers with secure attachment showed greater activation of brain reward regions, including the ventral striatum, and the oxytocin-associated hypothalamus/pituitary region." Fascinating, right? But how long can this phenomenon last?

How Long Will This Reaction Last?

“The good news is that for many people, leaking lessens after the first six to eight weeks postpartum," says Allyson Murphy, a lactation consultant (IBCLC) in New Jersey. "That's because milk supply regulates — meaning it stops being hormonally driven — and functions on supply-and-demand. It's also really important to know that leaking, or not leaking, is not a sign of an inadequate milk supply. You can make all the milk your baby needs and not experience leaking. Everybody is different — some bodies leak a lot, some bodies leak a little, and some never leak at all.”

The female body really is pretty amazing, isn’t it? Hopefully, if this happens to you, you'll have your baby nearby for some relief — and most importantly, the knowledge that there’s nothing wrong with you or your milk producers.

Kathleen Butler, lactation consultant (IBCLC) and Postpartum Doula (among other roles) with Your Baby Butler

More Like This
Can You Burp A Baby Too Hard? A Pediatrician Shares Tips For Gassy Tummies
Is It Good For Babies To Be Exposed To Germs? It’s Complicated
When It’s Safe To Bring Your Newborn To A Restaurant, According To A Pediatrician
Can You Give A Sleeping Baby A Breathing Treatment? Experts Explain

This article was originally published on Sep. 13, 2017