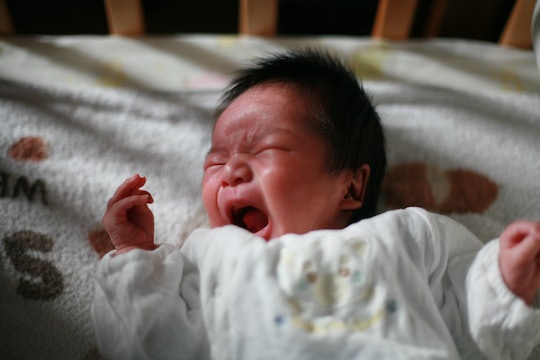 Here's Why Your Little One Sometimes Screams In The Night

It can be so upsetting.

Your baby is sleeping peacefully one moment, and the next they’re shrieking like a siren. It’s enough to rattle the nerves of any parent. So why does my baby scream in their sleep, and what (if anything) can a caregiver do to help? It’s hard to see anyone so distressed, particularly a baby.

For the most part, pediatricians explain that babies can scream in their sleep for just about any reason. “A baby may cry or scream in their sleep if they're having a bad dream, just like the rest of us,” as Dr. Corey Fish, Pediatrician & Chief Medical Officer at Brave Care, tells Romper. “We've all had nightmares and babies aren't any different in that regard. They may also be experiencing an upset stomach and have to be burped, they may need a diaper change, or they may just be uncomfortable with the temperature of the room.” “Shifting positions, feeling any discomfort, or even something as simple as having gas — are all of those possible reasons that babies might make noise when they sleep? Absolutely,” Dr. Christina Johns, pediatrician and Senior Medical Advisor for PM Pediatrics, tells Romper. Babies only have so many methods of communication at a young age, so screaming may be their go-to response for many basic needs. In other cases, however, babies scream at night because of something known as night terrors.

“When a child screams in their sleep, it’s likely that they’re having a night terror,” Dr. Harvey Karp, pediatrician, founder of Happiest Baby, creator of the SNOO, and author of The Happiest Toddler on the Block, tells Romper. “These are scary to witness. Your child may scream, arching their back, their face filled with fear. They may be sweating and breathing heavily.” It’s concerning to parents because the kid may seem awake, but they’re actually in a deep sleep, as Dr. Karp further explains.

Night terrors may be different from general nightmares. “Though there’s no way to be certain in non-verbal children, typically we don’t think that these kiddos have nightmares in the true sense of the word, or, a bad dream that is remembered the next day,” says Dr. Fish. “No one knows exactly what causes night terrors, though they’re thought to be a normal part of development.”

In fact, kids in this state may move around quite a bit, too. “Night terrors occur when a child is still asleep, but they will sit bolt upright and scream, appearing wide awake,” says Dr. Johns. “It is a completely benign phenomenon. It's scary to watch as a parent but it doesn't mean that there's anything concerning going on medically.” They aren’t necessarily quick, either. In fact, episodes of a night terror tend to last anywhere from 45 to 90 minutes, according to a 2020 review in StatPearls. To parents who witness night terrors, they can become something of an ordeal.

What To Do About Night Terrors

Your first impulse may be to wake your seemingly distressed child, but pediatricians caution against this idea. “Really, the thing to do is not to try to disrupt and wake up your child, but to comfort them and try to settle them back down to sleep in a very calm and soothing way — without trying to wake them up,” says Dr. Johns.

In many cases, the children’s night terrors seem more concerning for the parent than the child. “While we call these disturbances terrors, we don’t even know if kids are experiencing fear,” says Dr. Karp. “But, what we do know is that nothing parents do seems to help. After several minutes, kids usually just fall back to sleep or awaken, dazed, with no memory of the episode.” But you still remember it. The struggles of having a kid with night terrors can include sleep deprivation and feelings of apprehension for the parent, so take care of yourself during this trying phase as well.

For what it’s worth, these screaming sessions are nothing unusual for most kids. Night terrors are “something that they grow out of. It doesn't mean that there's anything concerning going on with their development or that there’s any worrisome medical condition,” says Dr. Johns. Maybe nobody mentioned the fact that occasionally your kid will scream like a banshee in the middle of the night — when nothing is wrong — but that’s the parent life for you.

How To Help Your Baby Sleep Well

One thing parents can do is help set the stage for healthy infant sleep habits. “Sticking to a predictable bedtime routine, using reliable sleep cues, and playing white noise all night can help babies sleep better,” says Dr. Karp. Giving your baby a minute to settle down after waking is another option. “As he ages, it’s ok to give the baby time to self-soothe (a baby video monitor can help with that these days!) as long as you know he is fed, clean, and safe,” Dr. Melanie Smith, pediatrician at Pediatrics East, based in Memphis, TN, tells Romper.

When To Call A Pediatrician

Pay attention if your gut is telling you these aren’t typical nightmares. For instance, “if your child has constant night terrors and is constantly screaming during their sleep; there may be another issue at hand. It's important to have your child evaluated by a pediatrician or sleep specialist if you suspect something is wrong,” says Dr. Fish. “Always go with your intuition as a parent.”

Any signs of labored breathing during sleep should also be evaluated by a pediatrician. “If the noises are isolated, and not continuous or ongoing, then usually that's not something to worry about,” says Dr. Johns. “If however, it’s noisy breathing each time the child inhales or exhales or if it looks like their breathing is particularly fast or labored, then that is something that you want to pay attention to as that can potentially indicate something like croup (a viral respiratory infection in the vocal cords) which causes stridor (noisy breathing).”

For the most part, though, babies who scream in their sleep are simply experiencing night terrors, one of the most baffling parts of growing up. It’s a rough phase for anybody else living in the house, certainly, but thankfully it is not going to last forever. In time your baby will sleep through the night without a peep, let alone scream.

Dr. Harvey Karp, pediatrician, founder of Happiest Baby, creator of the SNOO, and author of The Happiest Toddler on the Block

More Like This
When To Stop Swaddling Your Baby: 8 Signs It’s Time To Transition
Baby Growth Spurts: When They Happen & What To Expect
Why Do Toddlers Throw Themselves On The Ground During Tantrums? They Have Their Reasons
40 Lovely, Lively, Lavish Girls Names That Begin With “L”

This article was originally published on July 24, 2017