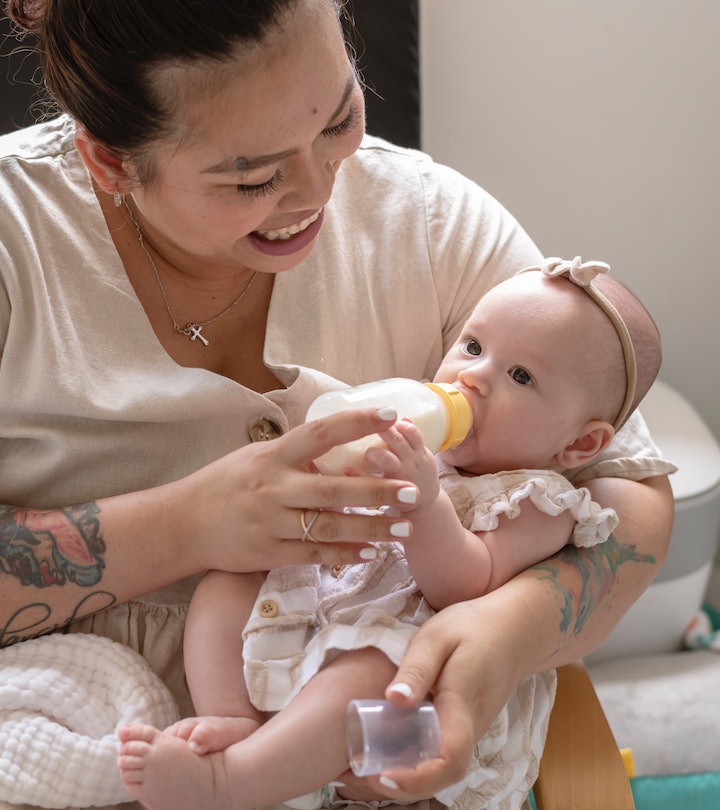 Your Baby Can *Totally* Drink Your Blue Breast Milk

So don’t panic or toss it!

If you’ve ever pumped your breast milk and put it in a bottle where you can really look at it, you’ve probably noticed that the color might seem a little, well, off. Or, not off exactly, but definitely different than the color of milk that you’re used to, like white cow’s milk (which is understandable, considering they come from very different sources). In fact, you might even notice that your breast milk has a blue tint to it. For first time moms, or moms who are new to breastfeeding, this might be alarming. The truth is, breast milk can vary in color for all sorts of reasons. But a blue tint is a common one, and I spoke to two experts to find out the exact answer.

Blue Breast Milk Is Your Foremilk

To figure out what’s going on it, it’s important to pay attention to when you notice that your breast milk has a blue tint — chances are good it’s probably right when you first start pumping or feeding. “Blue breast milk is usually a sign that milk is low in fat, much like skim milk,” Dr. Jessica Madden, MD, IBCLC, of Aeroflow Breastpumps, tells Romper. “It’s not unusual for foremilk, the milk that is ejected during the first few minutes of a feeding or pumping session, to have a light blue to gray tinge due to its low fat content.” You shouldn’t notice a blue tint later in a session. The milk pumped later in a session is called hindmilk, which Dr. Madden says is creamier with more fat, and it shouldn’t look blue or gray.

But that doesn’t mean the foremilk you have is bad for baby. La Leche League International notes that the foremilk and hindmilk are the same, it’s just that there’s usually more fat in the creamier part of your milk. But baby is still getting plenty of nutrients from foremilk.

Other Colors You May Notice In Breast Milk

That explains the possible blue tint you might notice in breast milk — but what if you notice a different color in the bottle? Some can be just as harmless as a blue tint, like light pink or red. Dr. Madden explains, “This can be the result of a small amount of blood mixed into breast milk, usually from nipple abrasions from breastfeeding and/or pumping. In some cases, it can almost look reddish-brown.” She adds that it’s safe for babies to drink breast milk with a small amount of blood in it.

Other fairly normal tints include yellow and green. Dr. Amna Husain, board-certified pediatrician and the founder of Pure Direct Pediatric, tells Romper that colostrum, the first form of milk produced by mammary glands (you’ll see this right after giving birth and for a few days before your milk really comes in) is typically the cause of yellow or orange breast milk. “It could also be due to high levels of beta carotene in foods such as carrots or sweet potatoes,” Dr. Husain adds. Carrots and sweet potatoes can also cause an orange tint.

If you notice a green tint, Dr. Madden says that this could be because you’re taking iron supplements. “There are also case reports of food and drinks with green dyes — like green Gatorade — and a medication called propofol turning breast milk green,” she adds.

You generally don’t need to be stressed over blue, yellow, pink, or green tints, but you might want to reach out a doctor if you notice that your breast milk is brown/rust-colored or bright fluorescent pink. Brown or rust-colored breast milk can be caused by something called rusty pipe syndrome. “During pregnancy or the first days after birth, extra blood flow to your breast can sometimes leak into your milk ducts, and can make the milk look brown or rust-colored,” explains Dr. Husain. “It should be clear after a few days when more milk appears in the ducts. If this persists, please contact your doctor.”

As for bright fluorescent pink, Dr. Madden says, “This color is usually due to contamination with a bacteria called Serratia marascens. This milk is not safe and needs to be dumped out.”

If you’re concerned about whether or not your breast milk has gone bad, a simple smell test should give you the answer. “If your stored milk smells and/or tastes sour and rancid when you warm it for your baby, it means that it is likely spoiled and should not be fed to your baby,” Dr. Madden says. “Outside of this situation, just about every other breast milk smell and flavor should be OK.” And remember: always speak to a doctor if you’re overly concerned.

More Like This
Chrissy Teigen Nodding Off While Breastfeeding As Miles Chats Away Is Too Relatable
Is It Safe To Pump While Pregnant? Experts Weigh In
Covid Vaccine “Deserts” For Kids Under 5 Make It Almost Impossible For Parents To Find Shots
Even If Your Baby Sleeps Better in Your Bed, It’s Still Not Recommended
What Parents Are Talking About — Delivered Straight To Your Inbox

This article was originally published on Jan. 26, 2018