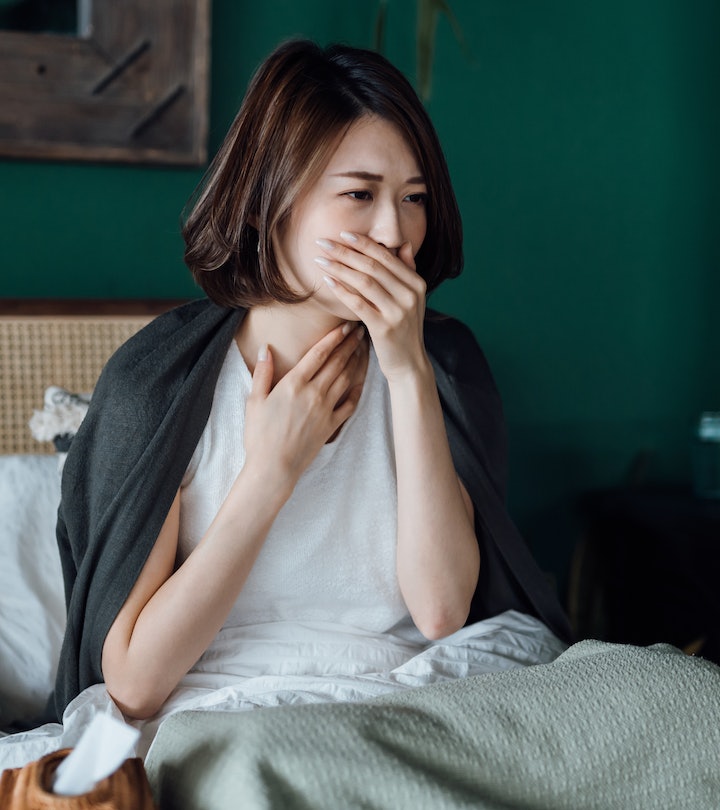 Can Coughing Too Much Hurt Your Baby In The Womb?

‘Tis the season for colds, coughs, and sniffles.

Becoming pregnant often means worrying for two. And if you happen to catch a cold, you might be wary of the medicines you’re allowed to take for the symptoms. So the urge to try and just endure your symptoms is understandable. But while some colds, sore throats, or coughs may pass with time, other symptoms can get worse if left unmonitored. An occasional cough can turn more chronic and painful, which might lead to the worry that coughing can potentially pose a threat to the baby you’re carrying. We know babies aren’t harmed by your sneezes, but those are quick, often transient sensations. Coughing is different. What happens when you exert that kind of constant jerky pressure to your ribs and abdomen for days on end? Well, there are a few signs to watch out for that will help you determine when it’s time to ring your caregivers.

Putting the common cold aside for a moment, coughing might actually be something you experience more during your trimesters. “Coughing in pregnancy can be frequent due to the physiologic changes that accompany gestation,” says Kecia Gaither, M.D., director of perinatal services in the Bronx’s NYC Health + Hospitals/Lincoln, who is double board-certified in OB/GYN and Maternal Fetal Medicine. So if some of the changes you’re experiencing do make you more prone to coughing, that could mean you might be doing more of it than usual if you have a cold, the flu, or allergies.

Can Coughing During Pregnancy Hurt The Baby?

You can likely rest assured. “The baby is encased in the womb surrounded by amniotic fluid, so the process of coughing alone doesn't affect the fetus,” Gaither tells Romper. To ease coughs, there are simple, if temporary, tricks you can try at home. “Hot tea with honey and lemon is a safe and natural remedy for cough,” says Leena Nathan, M.D., assistant clinical professor, department of Obstetrics and Gynecology at UCLA Health. “Cough drops are also generally safe in pregnancy.” Certain cough-medicine ingredients, such as guaifenesin and dextromethorphan, may also get the green light for use, Nathan says, it’s important to discuss medications with your healthcare providers.

But this doesn’t mean you should ignore your coughs, either. “If a woman is coughing for more than [a] week, it is important to seek medical care for evaluation and treatment,” Nathan says. “The cough itself will not hurt the baby in utero. However, the underlying illness causing the cough can be harmful,” Nathan says. “For instance, if the cough is due to asthma and the woman is not getting enough oxygen, this can negatively impact the baby.”

When To Call A Doctor About Coughing During Pregnancy

Take stock of what’s happening; try to figure out what’s causing you to cough so much. “Coughing accompanied by fever, shortness of breath , sore throat, and/or colored sputum production warrants attention by a physician,” Gaither says.

If at any time you come down with a fever, consider it a prompt to call your caregivers. Among other precautions, you need to be careful and certain you’re not dealing with a case of influenza, as the flu can be potentially dangerous to pregnant people, shared The American College of Obstetricians and Gynecologists. If it’s the flu, you’ll need to be in touch with your caregivers for monitoring.

And always remember, if you find yourself with any new symptoms or illness, you can always check in with your caregivers to get an opinion. You don’t have to wait for your worries, or your health, to worsen.