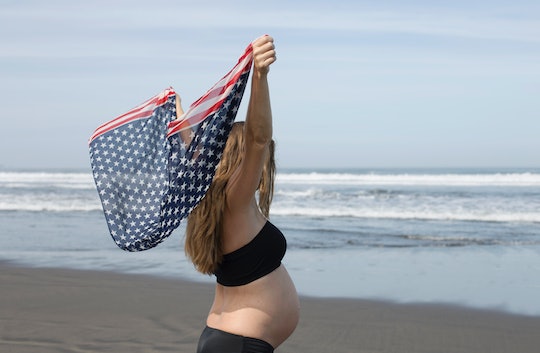 Can Babies Hear Fireworks In The Womb? Here's What Experts Say

Doctors break it down.

What’s the best season for pregnancy? Being heavily pregnant over the summer is tough — the heat feels extra stifling, you're sweating before you even step outside, and all the summer parties that used to be fun are now accompanied by a long list of concerns and forbidden items including alcohol, unsafe foods, and loud noises. With so many of these things prevalent at 4th of July celebrations, you're probably wondering, can babies hear fireworks in the womb?

“We have no data to suggest that pregnant people should avoid fireworks shows,” Dr. Temeka Zore, Reproductive Endocrinologist of Infertility and OB-GYN at Spring Fertility, and Modern Fertility Medical Advisor, tells Romper. “In general, a fetus's ears are mostly developed by about 20 weeks of gestation and they can start responding to sounds by 24 weeks.” Your baby may be able to hear fireworks in the womb and maybe even respond to the noise, but sounds are a bit muffled by the uterus and amniotic sac, Dr. Zore further explains. However, you may want to avoid getting too close to the festivities just the same. “The closer you are to the fireworks, the more the noise can affect your state, as well as the baby’s,” Alexandra Bausic MD, board-certified OB-GYN, tells Romper.

How loud are fireworks shows?

It depends on what type of fireworks you’re watching. “Professional display fireworks, like those used in large community celebrations, are louder than backyard consumer fireworks that you can purchase for at home celebrations. Some consumer fireworks are marketed for their colors and effects, while others are marketed to maximize the boom,” Julie L. Heckman, Executive Director of the American Pyrotechnics Association (APA), tells Romper in an email. Take care if your backyard celebration includes any particularly loud additions.

The next thing to consider is your distance from the fireworks show. Those colorful explosions can reach up to 150 decibels, according to the American Speech Language Hearing Association (ASLHA), which also warned that anything louder than 85 decibels could lead to irreversible hearing damage. However, unless you're setting off fireworks in your own backyard, you're probably far enough away from the source of the noise to avoid damage. The ASLHA recommends putting a distance of at least 500 feet between yourself and the fireworks.If you feel that the holiday just isn't the same without fireworks, stick to your city or town's official display and find a comfortably distant vantage point to watch from.

When can a developing baby hear?

While speech language and hearing experts urge everyone, pregnant or not, to be cautious about loud noise exposure, pregnant women have special concerns whether their babies can hear fireworks in the womb. Scientific research into the development of a fetus's auditory system shows that the effects of fireworks on your unborn child will depend on how far along you are. The beginning of the human cochlea — the part of your inner ear that processes sound — is present in fetuses as early as nine weeks gestation, according to a 2011 study published in The Anatomical Record. “Different studies and literature stated that the baby is more prone to be affected by strong noises after 20 weeks of pregnancy when the auditory system is fully developed,” says Dr. Bausic.

So if you are in the first half of your pregnancy, you should still avoid close proximity to fireworks and other loud noises, but you don't need to worry about your baby feeling scared or otherwise disturbed by your 4th of July merriment. From about 20 weeks on, fetuses in the womb have been shown to react to noise stimuli with movement and heart rate acceleration, according to a study on fetus brain development that appeared in Developmental Review. That isn't necessarily a bad thing — your unborn baby is exposed to a variety of sounds and noises all day long — but again, the more distance you put between your unborn baby and fireworks, the better.

More Like This
Pitocin Induction: What It Is & The Play-By-Play
Can Swimming Induce Labor? Experts Weigh In
Can You Bowl While Pregnant? Experts Weigh In
Is Salicylic Acid Safe To Use On Skin During Pregnancy?

This article was originally published on July 1, 2017